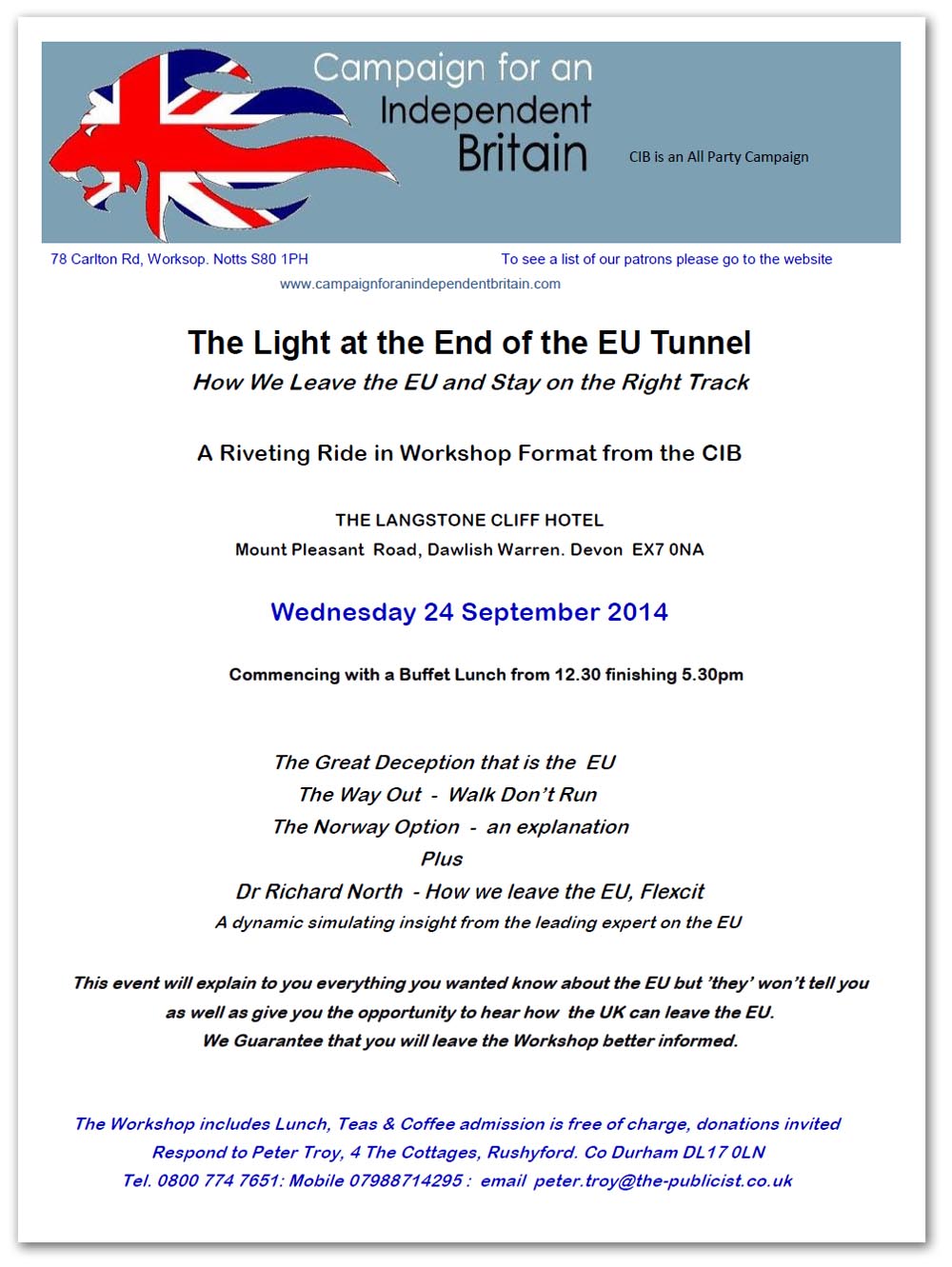 Despite the best attempts by the some to present "Brexit" as the property of a self-referential group of London-based think-tankers, politicians and journalists, we are once again taking the discussion out into the country, where the real debate belongs.

After the pilot run in Harrogate run in June, we are running another workshop in Wednesday 24 September, in Dawlish, Devon, generously sponsored by the CIB and Mr Anthony Scholefield. This means we're able to offer a profession presentation, with all the bells and whistles, without having to make a charge – although donations on the day will be gratefully received.

There is a tendency of the London claque to thing that the debate starts and stops in the capital, hence Tim Montgomerie blithely telling us last week that supporters of "Brexit":

… need to do a lot more to convince people that Britain can flourish as a more independent state – not cut adrift from the EU, as Europhiles suggest, but as part of a free trade arrangement with the EU.

This was in response to Mr Cameron's latest facile attempt to kick-start his "reform" programme, but what the likes of Mr Montgomerie fail to realise is that, as supporters of "Brexit", we have been working on this for a considerable time now. Anything outside London, and Mr Montgomerie's golden circle of contacts, simply doesn't exist.

With the latest version of Flexcit, though, we have 315 pages of carefully researched work, which serves amongst other things to point up the profound ignorance of the London claque.

When, for instance, he hear the lame mantra of "free trade agreements" with the EU, not one of the precious little dears stops to ask about scope, convergence requirements, hysteresis, conditionality, dispute procedures, updating provisions and a whole host of other matters which makes each trade agreement a unique event, and different from the rest.

Not once do we ever get past the first hurdle, in asking whether we are better off with portmanteau agreements, or whether it would be more advantageous to "unbundle" and work for sector-specific (or even product-specific) regional or global agreements, which could then be daisy-chained into a single agreement.

Such sophistication is way beyond the claque, who seem locked into sterile, over-rehearsed talking points which have changed little in decades of discussion, offering absolutely nothing that addresses the real practicalities of global trading as it exists today.

Then we have the self-important fantasists such as Campbell Bannerman, peddling his "EEA-lite", now on the basis of a fantasy scenario dreamed up for him by Civitas, which was already out of date before its author switched on his laptop and started typing.

The fortunate thing is that these people are not only myopic in their vision, but also so imbued with their belief that they represent the state of the art, that they are misleading the equally myopic Europhile claque into thinking that they have the measure of the anti-EU case.

Meanwhile, the real work, the real thinking, the real development, goes on completely unnoticed and unregarded by the respective claques, as we take the case not to the self-important few but to the country at large.

With more than a little help, I aim to have the first edition of Flexcit complete by mid-September, and published with the help of Robert Oulds, in time for the Bruges Group annual conference in November.

When it finally breaks cover, it will be the best and most complete plan ever produced, not least because it is the product of truly open minds, of free discussion and the open process of publication that it has undergone. In time, it will then dominate the territory, but London will be the last to know.

Long after everyone else has come to terms with the real needs for an exit plan, the claques will be prattling about the need to bring the message to the people, when the only ones outside the loop will be them.