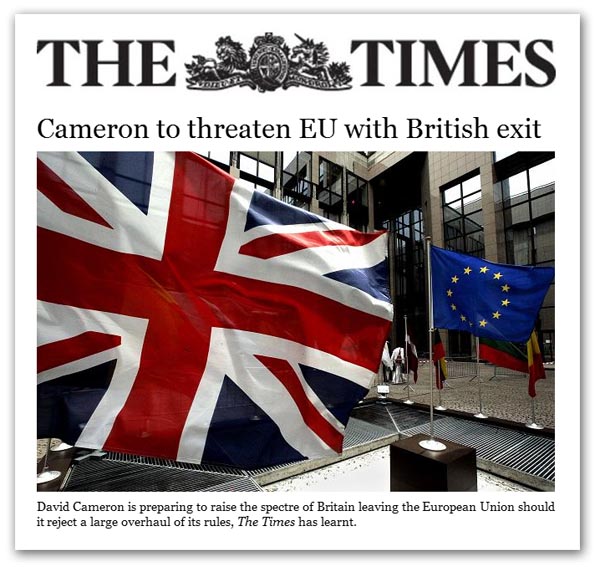 A bizarre article in The Times (skulking behind the paywall, as always) has David Cameron "preparing to raise the spectre of Britain leaving the European Union should it reject a large overhaul of its rules".

This, is would appear, has Mr Cameron continuing with the miasma of EU reform, with his "aides" remaining confident that "significant powers" will be returned to Britain, "allowing him to campaign to stay in a reformed EU during his proposed in/out referendum to be held in 2017".

A continuation of his dance of the seven veils, we are led to believe that this "shift" in sentiment is being "actively considered" in Downing Street, and would amount to a "significant toughening" of the prime minister's stance towards Europe (they mean the European Union) as he looks to renegotiate Britain's relationship with Brussels.

It really doesn't matter how many times this is discussed, and how many time we lay out the timetable that makes meaningful negotiations impossible to conclude before 2017. As long as there is a journalist gullible enough to listen, and a newspaper stupid enough to publish it, Mr Cameron will keep up this baleful game of trying to sell us his pretend reform.

The real reason for the current instalment comes clear, though, when we learn from "informed sources" that Mr Cameron could issue his threat at the Tory conference at the end of next month. All is thus explained. We are looking at the prime minister floating a trial balloon, to see whether it is worth his while racking up the tension, in the hope of getting some positive "eurosceptic" headlines from the conference.

Whether Mr Cameron does go ahead and issue his threat, though, is doubtless a matter of supreme indifference to the "colleagues". Over term, it has emerged that they have their own agendas and timetables, and are not prepared to be bounced into premature action by a British prime minister.

Given the continuing economic problems in the eurozone, the growing external crises, from Donetsk to Tripoli, and the fact that Hollande on this day has dumped his entire cabinet, it is doubtful that today's empty posturing by a tiresome Brit will even register.

What will eventually decide the issue is whether the UK government is able to convince its peoples that we are better off outside the EU, and that will never happen until it has convinced itself of that fact.

In the meantime, I have posted version 19 of Flexcit which is now has the work running to 311 pages, and getting close to to an end point. It will, of course, be ignored by the "great and the good", because that is what they always do with anything of this nature that lacks "prestige", and certainly anything that comes out of EUReferendum. But the work will continue regardless.

New in this particular version is Chapter 9 on political co-operation – which deals with foreign and defence policy, amongst other things. In a fiendishly complex area, the work is far from finished, but it does represent another area that can be studiously ignored.

With time, though, some of the ideas will come to fruition, and we will be relieved of Mr Cameron's tedious dance. But I've a feeling that we have a long time to go before playtime is over, and the grown-ups finally get down to work.