Brexit: Johnson – living on another planet 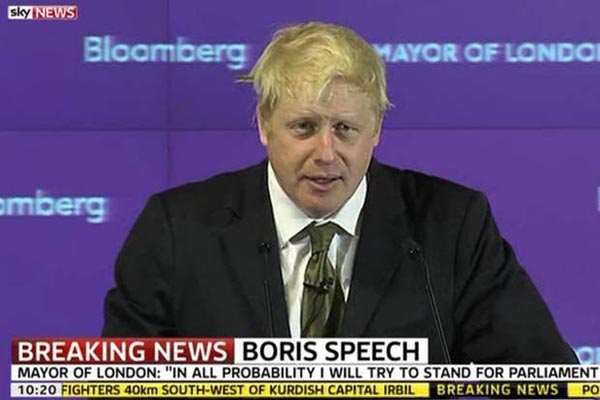 We already know that Johnson is imbued with an ignorance of a profundity that only an expensive private education can buy, but one wishes he would not be quite so keen to parade it at every opportunity.

The particular opportunity of the day is the delivery of a speech at the Bloomberg headquarters in London, a significant venue as this is where Mr Cameron made his 2013 speech promising an in-out referendum.

First on the agenda for Mr Johnson is to thrill the collective hackery with a promise that he will seek re-election as an MP in the 2015 general election. His speech, however, attends the matter of renegotiating terms with the EU, and is seen as an attempt to destabilise David Cameron, presumably as part of a grand strategy to support a leadership bid in mid-2015 after Mr Cameron stands down, following his failure to win the general election.

But before anyone looks to this buffoon for leadership, they should look at the detail of his speech which, in essence, shows that he does not have the first idea of what he is talking about.

On leaving the EU, for instance, Mr Johnson tells us that, "we could negotiate a generous exit, securing EFTA-style access to the Common Market", thereby confirming that reputation for the most profound ignorance imaginable.

The point, of course, is that EFTA does not have access to the "Common Market", better described as the Single Market. The "NIL" group (Norway, Iceland and Liechtenstein) have negotiated access through the EEA agreement, while Switzerland has negotiated a series of bilateral deals, which owe nothing to either EFTA or the EEA.

This confusion we picked up on Sunday - which incidentally confirms that Johnson doesn't read the leading independent anti-EU blog, therefore making him less well informed than many of his voters.

Needless to say, the distinction between the deals forged by the "NIL" group and Switzerland is not academic, and nor is it trivial. As an illustration, we just have to take one of the examples Mr Johnson gives in his speech, where he seeks to portray the burden of regulation imposed by the EU.
"Take the waste framework directive", he says, "that means all small businesses have to register as waste carriers if they want to transport a small volume of non-hazardous waste in their own vans – such as a nursery wanting to take grass cuttings or compost, they have to register as a waste carrier".

The point here is that, if the UK adopts the EEA option, it will find that the waste framework directive is part of the EEA acquis, so if Mr Johnson wants access to the Single Market via this route, he will have to accept the directive as part of the package.

However, if he goes down the Swiss route, the negotiating team will be dealing with such issues on a case-by-case basis, but then it took 16 years for the current level of agreement to be reached, one that is currently under review. Would Mr Johnson have our Article 50 negotiations lasting 16 years – or more?

The plot then thickens, because the requirement for businesses to register if they move their own waste did not arise specifically from the waste framework directive. In UK law, it only took effect this year, but as a result of an ECJ ruling after a case in 2006 taken against the Italian government.

Since the ECJ has no jurisdiction over the EEA agreement, arguably, this ruling could be ignored and Britain outside the EU could choose to interpret the framework directive in its original sense, and exempt businesses carrying their own waste from registering.

Necessarily, that will be for the lawyers to argue, but if we step back from the law and look at the practicalities, we find that all that is required is for businesses to register their details online, for which there is no charge imposed. This is a one-time registration that does not need renewal, and takes about 10-15 minutes.

In other words, one wonders what point Mr Johnson is trying to make. What is the big deal? And what is the point when he picks on the "EU Driving Regulations" for vehicles over 3.5 tonnes, which impose a complex web of restrictions on driving hours?

How are we supposed to solve the construction boom in London and get small firms coming to the market when we have regulations like that, Mr Johnson asks, the hypocrisy of his question almost defying imagination.

Talk to small builders in London, though, and drivers' hours are the least of their problems. What really troubles such firms are the costs of operating with Mr Johnson's congestion charges, and the huge burden of inflexible parking restrictions combined with the predatory activities of local authorities.

All Mr Johnson's speech does, therefore, is highlight the actions of an ignorant man trying to make political capital out of issues about which he knows next to nothing. And a man who does not even have a grasp of the basics is hardly one who can be relied upon to guide us through the labyrinth of an EU exit campaign, much less provide leadership.

In truth, Boris Johnson has nothing to offer us on the EU. One view is that he is promoting a reform package that will be impossible to achieve, simply to wrong-foot Cameron and give himself a political boost.

What he should realise is that people generally have had enough of posturing politicians, using peoples' concerns to further their own careers. Johnson's carefully contrived image is beginning to wear thin, and his attempt to use the EU as his own personal plaything are entirely unconvincing. The issue is far too big and much too important for Mr Johnson's games.

We really can do without them – and him.