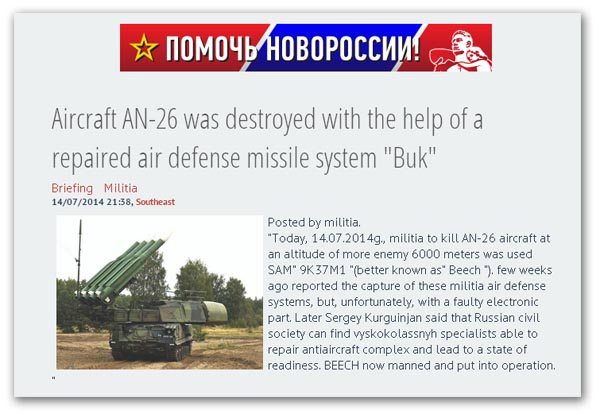 In Part I, we reviewed a specific newspaper report from yesterday which failed somehow to inform us that there is no good evidence that Russia (as in the Russian government) supplied or conspired to supply SA-11 anti-aircraft missiles to Ukrainian separatists.

That does not in any way diminish the evidence that Russian and the separatists are working closely together, but that is not sufficient in itself to assert that the Russian government is complicit in assisting the separatists in what amounts to a major and dangerous escalation in a growing civil war in eastern Ukraine, one far more serious than has been generally appreciated.

But, the media in particular seem to be ignoring the admission that any evidence of Russian complicity is supplying SA-11s is very slender indeed, while CNN is going way over the top in alleging Russian complicity, with no evidence at all other than unsupported statements by anonymous officials.

In the main, the media also seems to be ignoring reports that the separatists obtained the equipment on 29 June from the Ukrainian air defence regiment A1402 in Donetsk. The evidence is not even being contested. Largely, it is simply being ignored.

However, there have been reports to the effect that, while launcher systems were captured, they were non-functional - even "junk" or broken beyond repair - at the time of capture.

What we have now though is an uncorroborated report which tells us that that Russian "civil society" assisted the separatists in repairing a launcher after it had been captured, returning it to a working condition, allowing it to be put into use by the 14 July (see screen grab above).

A point of interest here is that the term "civil society" does not necessarily imply official Russian support. Furthermore, in that the border between the separatist-held territory and Russia is porous, it is quite possible that the launcher, having been captured from the Ukrainians, could have been transported over the border, and than then back into Ukraine, where it was used against an An-26 military transport on 14 July.

What then becomes quite crucial is that, if movement across the border implies complicity of the Russians, we cannot necessarily use this movement as evidence of high-level support from the Russian government, and not can we say that, even if one launcher was seen coming in from Russia (which does not appear to have been the case), that does not necessarily mean it was supplied by the Russians.

What is also extremely significant from the source just cited, though, is that we see confiormation that the SA-11 launcher was used to down an An-26 military transport on 14 July, after the equipment had been repaired to make it usable. 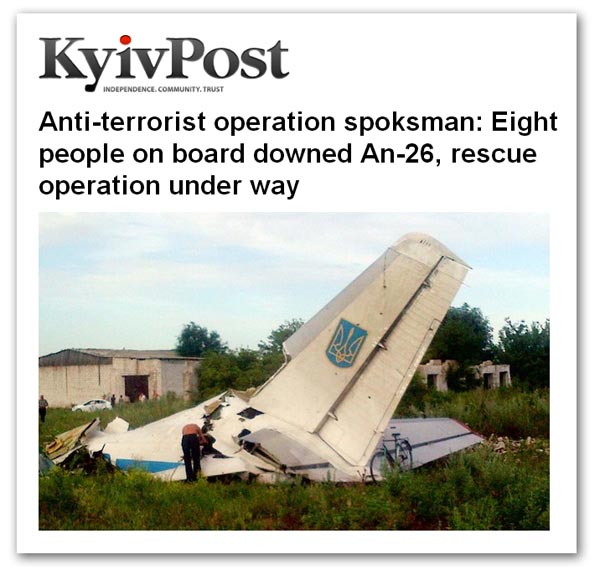 This is the first Russian language source I can recall which specifically suggests that the Antonov was downed by an SA-11. Nevertheless, this is by no means the only report. We also see it from the Financial Times, which tells us that the aircraft was hit while flying at 6,500m ñ well beyond the range of a portable missile system.

The attack, we are told, sounded alarm bells in Kiev. And although then it was regarded as "an isolated" incident, we are told that officials in Kiev are now in little doubt as to what caused it ñ and the crash of MH17. They point the finger at a Russian-made "BUK" missile launcher.

At the time, though, it seems the Ukrainians were keen to blame Russia, charging that "a more powerful missile" than a shoulder-carried missile had been used, "probably fired" from Russia.

David Stern for the BBC even then described the accusation that Russian forces had shot down a Ukrainian transport plane as "potentially a game changer". If Russia was indeed targeting Ukrainian aeroplanes from inside its territory, it was "an act of aggression of the highest order".

However, the Security Service of Ukraine (SSU) claims it knew full well from a telephone intecept on 14 July between a pro-Russian militant and a man identified as "Oreon", an intelligence officer with Russia, that the separatists were talking about "avenging for planes today", with Oreon recorded as saying: "We already have BUK, we'll be shooting down them to hell".
Yet, on the day, the SSU did issue a press release about the detection of anti-aircraft missiles, but what it was reporting was the finding of a cache of man-portable "Igla-1" missiles. There was no hint whatsoever, that massively more dangerous missiles were in the hands of the separatists.

However, despite choosing publicly to pin the blame on the Russians, the Kiev authorities that very day imposed a minimum height requirement of 32,000 on all overflights. It was a thousand feet higher than that, on the instructions of Ukrainian air traffic, that MH17 was later to fly.

What has been completely missed, however, is that Ukraine bears the primary responsibility for ensuring the safety of aircraft in its own airspace and, if it had been aware that the separatists had missiles which could reach 72,000ft - and they had already shot down one aircraft - then it had a duty to publish a warning and exclude aircraft from the danger area.

That it kept silent, revealing its knowledge about "BUK" only after MH17 had been shot down, puts the Ukrainian government in the frame as responsible for putting the Boeing 777 in harm's way.
Not least, Ukraine was protecting the revenue from the overflight fees levied on the 350 aircraft transiting each day, amounting to millions each week. But one can only speculate on further motives. The indications are that the government was looking for a "game changer".

With the separatists in possession of high-performance anti-aircraft missiles, and the air traffic control obligingly routing a stream of airlines over their territory, it could only be a matter of time before the Ukrainian government got its wish.

In fact, it took a mere three days for that "gamer changer", with the "BUK" system intercepting MH17. Things will never be the same again. And that brings us to the conclusion of Part II.