UKIP: the embarrassing stupidity of O'Flynn 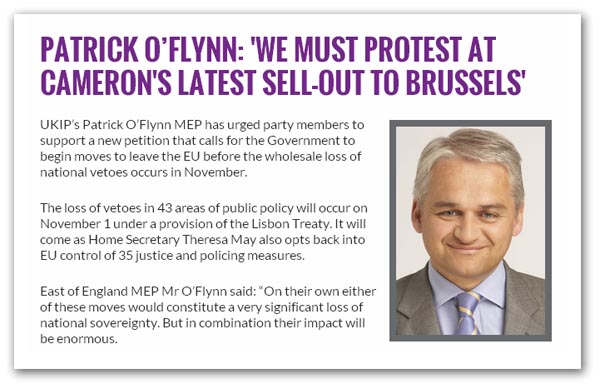 Following the example of TGL in falsely accusing Greenpeace of taking Brussels money, UKIP's Patrick O'Flynn is now vying for the top slot in getting things completely wrong.
Falling for the meme that has been floating around on diverse websites, including this one, we see the myth perpetrated that: "On the 1st November 2014 the right of Parliament to legislate over us in 43 areas … will be removed and be made subject to … QMV".

Included in a magical mystery list is Article 50 of the TEU – that which relates to the procedures for leaving the EU – the supposed removal of the veto translated as making the withdrawal of a member state conditional on QMV. Needless to say, there are no original sources cited for the assertions, but that doesn't stop O'Flynn swallowing the myth, hook, line and sinker.

In fact, there is no loss of veto coming into force on 1 November. The change over from unanimous voting to QMV in about 40 areas has already taken place. It came with the entry into force of the Lisbon Treaty on 1 December 2009, so these changes have already been in place for nearly five years, without O'Flynn apparently noticing.

What does change on 1 November 2014 is that a there is a new system of QMV. A new "double majority" will apply when, according to Article 16 of the consolidated treaty, "a qualified majority shall be defined as at least 55% of the members of the Council, comprising at least fifteen of them and representing Member States comprising at least 65% of the population of the Union".

Despite the sterling attempts of Denis Cooper, Autonomous Mind and this post by Boiling Frog, followed by this one to put the record straight, this has not stopped Patrick O'Flynn urging party members to support a new petition that calls for the Government to begin moves to leave the EU "before the wholesale loss of national vetoes occurs".

Sadly, there is no stopping this rather stupid man, even if his members deserve better. It is bad enough having these silly memes thrashing around the internet, but senior members of UKIP should not be leading people astray.