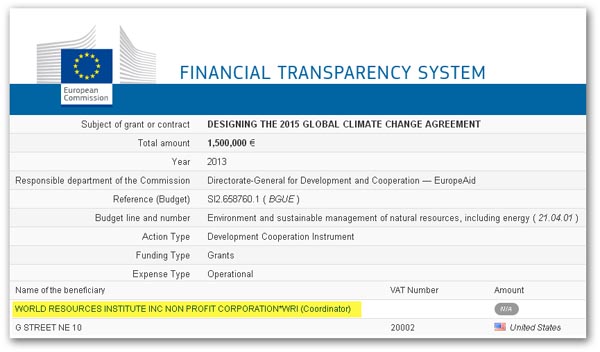 With no fanfare at all, the European Commission has slipped out the 2013 figures for its Financial Transparency System, a searchable database of grant funding to third parties, including NGOs.

All this and much will be the subject of further reporting and analysis, but once again it brings to light the huge amount of taxpayer funding going to unaccountable NGOs, and especially (but not exclusively) climate change advocacy groups.
In 2013, though, there is a new entrant to the listings – one which has not appeared before on the EU list of recipients. This is the World Resources Institute (WRI), which has been given €1,500,000 of our money for "designing the 2015 global climate change agreement".

What is especially interesting about this is that the WRI is a United States organisation, established in 1982 under Delaware tax laws, with its head office in Washington DC. But, despite a considerable amount of its activity being devoted to lobbying the US government, it has a huge international dimension, receiving most of its multi-million income from governments, their agencies and from multi-national corporations.

But illustrating the incestuous relationship between the NGO "community", we see several of the "usual suspects" on the list. The European Climate Foundation turns up with $879,317, the ClimateWorks Foundation with $533,842, the Energy Foundation with $330,000, the Alliance for Sustainable Energy, LLC with $325,000, Climate and Development Knowledge Network with $251,911, the Climate and Land Use Alliance with $497,941 and Water Conservation International $249,697.

The question is, of course, is why these bodies, with so many governments involved, are giving money to a private US charity, for activities which include preparing the ground for an inter-governmental agreement in 2015, fronted by the UN Framework Convention on Climate Change secretariat.

Accountable to no-one but the US tax authorities, established under Delaware state law, this "charity" should have no role whatsoever in framing agreements between governments the nature of which potentially cost taxpayers billions, the beneficiaries of which are charities of this nature.

In particular, our government and the EU have no business funding such organisations, their very existence representing the darker side of globalisation, where our collective fates are increasingly determined by such unaccountable, faceless bodies, exerting more power and influence than even governments themselves.