Booker: EU in a worse mess than Cameron 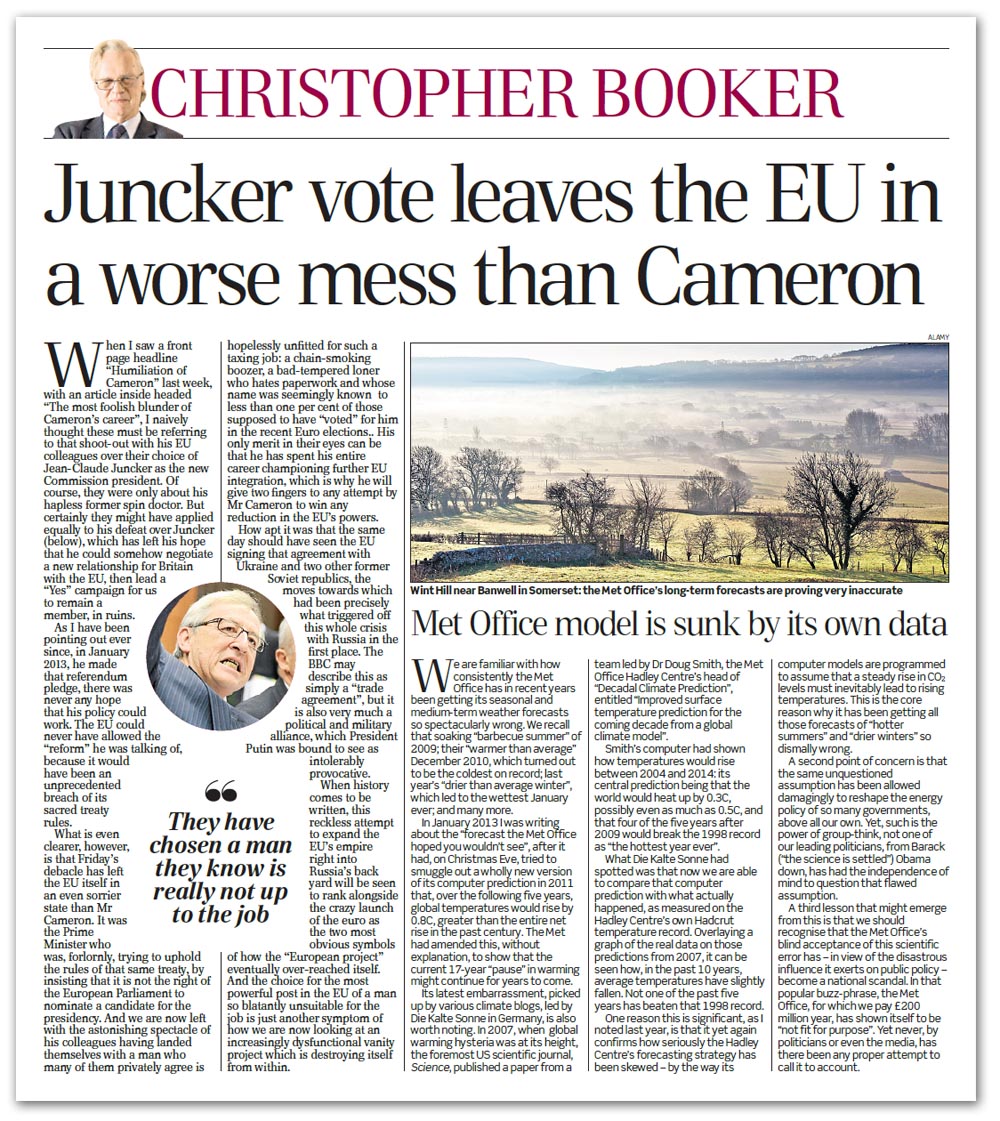 Only in a very technical sense can Mr Cameron's stand last Friday be considered a "defeat". Booker is right, though. His ambition is casualty of the vote. Any claim that he could somehow negotiate a new relationship for Britain with the EU, then lead a " yes" campaign for us to remain a member, lies in ruins.

In fact, ever since he made that referendum pledge, in January 2013, there was never any hope that his policy could work. The EU could never have allowed the "reform" he was talking of, because it would have been an unprecedented breach of its sacred treaty rules.

What is even clearer, however, is that Friday's debacle has left the EU itself in an even sorrier state than Mr Cameron. It was the Prime Minister who was, forlornly, trying to uphold the rules of that same treaty, by insisting that it is not the right of the European Parliament to nominate a candidate for the European Presidency.

Now we are left with the astonishing spectacle of the "colleagues" having landed themselves with a man who many of them privately agree is hopelessly unfitted for such a taxing job.

Jean Claude Juncker is a chain-smoking boozer, a bad-tempered loner who hates paperwork and whose name was seemingly known to less than one percent of those supposed to have "voted" for him in the recent Euro elections. His only merit in their eyes can be that he has spent his entire career championing further EU integration, which is why he will give two fingers to any attempt by Mr Cameron to win any reduction in the EU's powers.

How apt it was that the same day should have seen the EU signing that agreement with Ukraine and two other former Soviet republics, the moves towards which had been precisely what triggered off this whole crisis with Russia in the first place. The BBC may describe this as simply a "trade agreement", but it is also very much a political and military alliance, which President Putin was bound to see as intolerably provocative.

When history comes to be written, this reckless attempt to expand the EU's empire right into Russia's backyard will be seen to rank alongside the crazy gamble of the euro as the two most obvious symbols of how the "European project" eventually over-reached itself.

And the choice for the most powerful post in the EU of a man so blatantly unsuitable for the job is just another symptom of how we are now looking at an increasingly dysfunctional vanity project which is destroying itself from within, Booker concludes.

For my part, I suspect few will see it that way. But at its heart, the EU is a rules-based organisation. Many times, when it has suited it, it has waived or skirted them. But never has there been an attempt so egregiously to run roughshod over the most basic of its rules, one designed to preserve the institutional balance.
Few things in Brussels are more fragile, and more vital to the functioning of the "Community" that the balance between its three primary institutions - the Commission, the Parliament and the Council. In ceding the power to the Parliament, which tends to ally itself with the Commission, the European Council has fundamentally altered the balance of power.

In effect, the Mr Juncker, when he is approved by the European Parliament, will be an imposter - a man who has no right to be where he is, and with no credibility - the "accidental president" who no one wanted. He will, of course, have all the trappings of power, and the "colleagues" will welcome him as one of their own, but he will never be the real thing. He cannot command the untrammelled respect of all three institutions.

As far as the UK goes, Mr Cameron says he still favours negotiating changes with the EU, but, "the job has got harder of keeping Britain in a reformed union". In fact, it is impossible. Whatever kudos he might have gained from confronting the "colleagues", he will lose the moment he comes back from Brussels purporting to have won a new deal.

I cannot see a scenario any more, where a British government can credibly hold a referendum and tell us to vote "yes". That will be the legacy of the Mr Juncker who, in the run-up to the 2005 French referendum, said: "If it's a yes we will say 'on we go', and if it's a no we will say 'we continue'".

What has now changed is that there is nothing he can say that will make any difference. He is a lame duck president lording it over damaged goods.