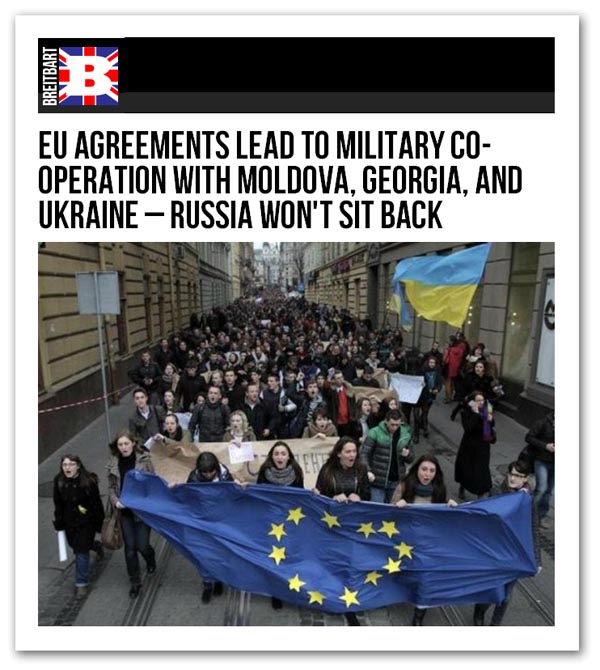 While attention has been focused on Juncker's nomination, the European Council has been engaged in signing "far-reaching trade partnership deals" with three former Soviet republics - Ukraine, Georgia and Moldova.

That, at least, is what the BBC's Laurence Peter is retailing to the corporation's millions of online readers around the world, apparently not understanding the distinction between what he describes and the title which he so helpfully identifies as: "Association Agreement and Deep and Comprehensive Free Trade Area". This is not one but two agreements contained in each package.

Despite this. Laurence Peter writes only of the trade related components, telling us: "They commit the countries to EU standards, including new customs regulations, quality controls and free market competition". One wonder whether the BBC's man has even read the texts of the agreements.

Mary Ellen Synon has got the point, but then she readily acknowledges the source of her information. But not so Laurence Peter who, if he had does a modicum of research could not honestly have restricted his focus to just the trade element. Like M E Synon, he should be telling us that the Association Agreements bring additional and far more important important elements to the table.

In the case of the EU-Ukraine Association Agreement package, for example, Laurence Peter is curiously selective in his narrative about trade deals.  In the documentation, such matters occupy a lower position in the text of the agreement, and he would have to go past the more important bits to get there.

Right at the top is the agreement on "Political Dialogue and Reform, Political Association, Cooperation and Convergence in the Field of Foreign and Security Policy, and Justice, Freedom and Security". The exploration of the text reveals such gems as this:

The Parties shall intensify their dialogue and cooperation and promote gradual convergence in the area of foreign and security policy, including the Common Security and Defence Policy CSDP), and shall address in particular issues of conflict prevention and crisis management, regional stability, disarmament, non-proliferation, arms control and arms export control as well as enhanced mutually-beneficial dialogue in the field of space. Cooperation will be based on common values and mutual interests, and shall aim at increasing policy convergence and effectiveness, and promoting joint policy planning. To this end, the Parties shall make use of bilateral, international and regional fora.

1. The Parties shall enhance practical cooperation in conflict prevention and crisis management, in particular with a view to increasing the participation of Ukraine in EU-led civilian and military crisis management operations as well as relevant exercises and training activities, including those carried out in the framework of the Common Security and Defence Policy (CSDP).

Should that have eluded Mr Peter, he need only look at the EU's External Action Service website to see the reality that he and the British media generally is inexplicably refusing to report. It tells us:

The Association Agreements will significantly deepen political and economic ties with the EU in the framework of the Eastern Partnership. As the EU has expanded, these countries have become closer neighbours, and their security, stability and prosperity increasingly affect the EU’s. Closer cooperation between the EU and its eastern European partners is very important for the EU's external relations.

The comprehensive free trade agreements (DCFTAs) which the three countries have signed are, in fact, supplementary parts of the Association Agreements. The EU's priority is in deepening political ties and cooperation. The DCFTAs are a mere sideshow in this geopolitical game.

It is this reality that saw the Russians react so furiously to western encroachment up to its south western border - as the EU's expansionism sought to take in the home of the Russian Navy's Black Sea Fleet in Crimea, a reality which the media continues to ignore.

It is no wonder, therefore, that so many people are confused about Russia's behaviour. To those relying on the British media (with a few honourable exceptions), it would rightly be seen as completely disproportionate if all Kiev was signing was what the British media portray as a "trade partnership deal".

Interestingly, the fault does not lie with the EU. It has been open in its intentions and it is very easy to confirm its goal of extending its political control to these new countries. And there can be no illusions that it is seeking to align security (defence) policy, developing military and military technical cooperation and seeking commitments for Ukrainian, Georgian and Moldovan troops to take part in Brussels-led peacekeeping missions.

There should thus be no mistake. These agreements are not about increasing trade in sunflower seeds and walnuts. They are an attempt by the EU to become a regional force that can project power, right up to the Russian border. Just don't expect the BBC or other British media to tell you.

The Daily Telegraph, for instance, also omits the defence pact details. It simply reports on the "landmark economic trade pact", the signing prompting "a furious response from the Kremlin". Even the US press doesn't get it. It talks of an "economic pact" and then has Grigory Karasin, Russia's deputy foreign minister, warning in rather vague terms of "serious consequences".

The Russian news agency, ITAR-TASS, however, is more informative. It has the Russian Foreign Ministry stating that: "the EU counterparts failed to prove the association agreements' advantage", expressing concerns that "the rupture of trade and economic relations with our neighbours can damage the Russian economy".

But it is the Moscow Times which tells the whole story. Dismissing the effects of the trade agreements, it has analysts saying that the "greater effect" of the signings is "their erosion of Russia's informal influence in former Soviet republics".

"Current and former CIS countries have a clear choice: Either they join the Eurasian Economic Union with Russia, or associate themselves with the European Union", says Alexei Makarkin, deputy director of the Centre of Political Technologies think tank in Moscow. "Russia will react negatively to these signings not because of their economic nature, but because it views this as European expansionism into its traditional sphere of influence", he adds.

And to get the story, all the BBC had to do was read the Russian press. It couldn't even to that.