UKIP: winging it on NGOs

ů why, when once a year in December, we get the annual revision of the fishing quota system, I couldn't for the life of me work out why Greenpeace's criticism of the discards regime that has been on place now for nearly thirty years ľ that has led to British industry in the North Sea throwing back far more dead that it was allowed to keep alive ľ I kept wondering why the criticism from Greenpeace wasn't stricter, wasn't sterner, until I saw the very large sums of money that they actually get from the European Commission every year.

So I'm not for one moment suggesting that we close down Oxfam or anything like that, but I do think that, given the influence these organisations have over public opinion, it's a fairly bizarre state of affairs to have the government effectively funding the organisations that lobby it. And I think that relationship is much too close and is unlikely ľ as I say with my Greenpeace example of fishing quotas ľ to perhaps give us the level of debate that should be desired.

Yet, the YouTube clip (top) is taken from the Greenpeace website, where the organisation has joined with the Fishfight campaign, to erů ban discards. On the other hand, when we look at Mr Farage's recent contribution to the discards debate, via the UKIP website, we get this result from Google: 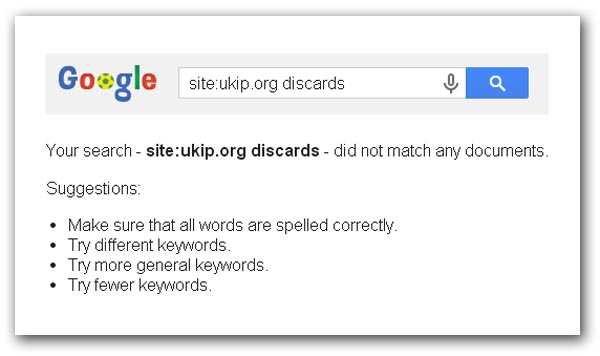 But the killer fact, of course, is that Greenpeace does not solicit, nor accept contributions from governments ľ and that includes the EU. Of all the major NGOs, this is the one that does not take a penny from the Commission, as we recorded in our earlier piece. Mr Farage never "saw" any sums paid to this NGO.

Fortunately for Mr Farage, the event was chaired by Rt Hon Peter Riddell, Director of the Institute for Government, who shares the same degree of ignorance as the UKIP leader. And thus was Mr Farage able to escape unchallenged.

Similarly, as to his substantive theme ľ the adoption of "direct democracy", Mr Farage wants more referendums, but only as a "backstop", a "safety net" which would be used to stop government doing things.

This, of course, is not direct democracy, demonstrating that ľ as Complete Bastard points out ľ Mr Farage has not thought things through. "So what we're looking at is panicked policy harvesting from a deadbeat party that has overextended itself and wasted everyone's time", says Bastard.

Interestingly, there were journalists at the meeting (including one from the Daily Mail), but none get near picking up Mr Farage's errors. The only person who queried his claim was Andrew Carner (35 years a civil servant), a governor of the Institute, who told Mr Farage: "I think your funding figures on NGOs are simply not right. Very few of the big NGOs get a majority or a large proportion of their funding from government ľ they get a few percent".

Had Mr Farage been better briefed, he could have pointed out that the WWF has been paid nearly Ç54 million from EU funds in the six year period from 2007 to 2012, the RSPB were paid more Ç14 million, and that Friends of the Earth Europe are primarily funded from public funds. Its work programme in 2013 cost Ç1,368,059.00, of which the EU contributed Ç751,064.00 (54.89 percent). Likewise, the EEB gets most of its funding from the taxpayer.

Putting these nine together, with Greenpeace the notable exception, the Green 10 minus one are primary or lead recipients of funds to the tune of Ç126,610,677 disbursed by the Commission between 2007-2012. But, as we know, Mr Farage does not do detail. But he does, it seems do fiction. And when everyone else in the room is as ignorant as he is, he can get away with it.
Nevertheless, over ú100 million paid to the "top nine" environmental NGOs would have made the point that much more strongly. As it is, Mr Farage may be getting a call from Greenpeace.