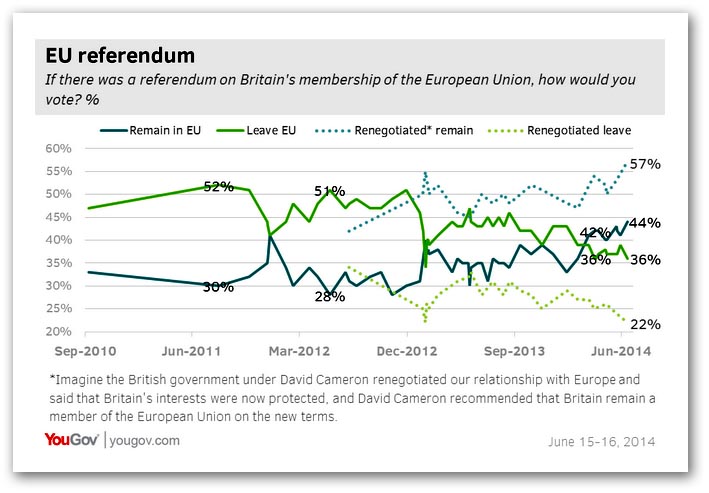 There is a more than usually disturbing thing about the recent YouGov survey on EU referendum voting intentions. People were asked how they would vote in the event that David Cameron "successfully renegotiates Britain's relationship with the EU". And, given that situation, those who wanted to "remain in" the EU hit 57 percent, against the 22 percent who wanted to leave.

However, those tortured souls who actually read this blog will know that Mr Cameron's chances of renegotiating anything with the EU, successfully or otherwise, are nil to the nth power, minus as many trillion as you could write on the deck of the new HMS Queen Elizabeth in eight-point lower case New Times Roman.

Thus, to get 57 percent of the mortal beings, who no doubt claim a degree of sentience, actually believing that Mr Dave can achieve the impossible has to mark a new low in the gullibility of our electorate.

Actually, this is a new low. The gullible "inners" surge to a 35-point lead – the largest since the question was first asked this way in June 2012. The worse Mr Cameron's chances get, the more people believe he can actually achieve something.

What is particularly terrifying is that this same electorate, even without incentive of Mr Cameron's happy hour, is - according to YouGov - "increasingly positive" about staying in the Union. Their poll, published in The Sun, reports an eight point lead for those who want to stay in the EU.
It is also is the largest lead recorded since YouGov first asked the question, this time in September 2010. Some 44 percent of the electorate would now vote to stay in the Union, while a minority of 36 percent would vote to leave. And that, sadly, is a continuation of a trend which started in March.
Three months later, we have the Telegraph's Iain Martin asking: "Is UKIP putting voters off Euroscepticism?". He's really bright this one, for a legacy media hack. It's only taken him that long to notice the inverse correlation between the apparent rise in support for Mr Farage's dysfunctional party and the fall-off in support for leaving the EU.

But then, if you follow Autonomous Mind, you get to see that there wasn't much of a UKIP surge anyway. It exists only in the minds of the faithful, who still seem to think that getting the support of 9.2 percent of the electorate, to gain three percent of the vote in the European Parliament, somehow represents a "political earthquake".

Recalling the perspicacious, if somewhat slow-witted Mr Martin, one also sees another report which, in the best tradition of the legacy media, tells us what we already knew - that many of those who did vote for UKIP in the euros did so because of Mr Farage's pitch on immigration.

It is that, though, which we believe has created the "glass ceiling" for UKIP and – long before Mr Martin got there – we believe is alienating potential supporters for the "out" proposition.

Martin, summoning up up what brain cells he can muster, is left wondering whether UKIP "could end up being toxic to the Eurosceptic cause". I told you this one was bright. However, last month we had no doubts at all. Followed by Bill Cash a few days later, we believed Farage was variously toxifying or contaminating the brand.

Whether you believe that or not, the polls (and not just YouGov) do indicate that, if we had an EU referendum now, we would lose it. Moreover, the trend away from leaving the EU is hardening. I begin to wonder, therefore, whether I have misread the situation, and that the hype over Juncker is a devious ploy to bring forward a referendum that we most certainly will lose.

Yet - Martin observes - Britain should be, according to UKIP orthodoxy, halfway out the door at the EU. Thus, while the BBC thinks UKIP is "incompetent, venal and racist", it seems to be something much worse – a loser. And even if you don't agree, there's no denying that the anti-EU movement is in dire trouble.
FORUM THREAD