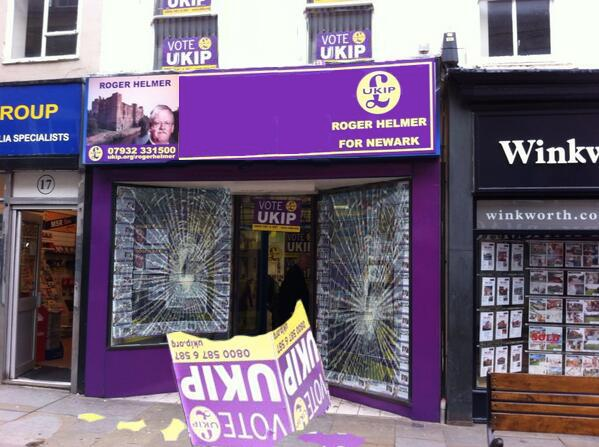 You either go forwards or you go backwards. And even while Farage was trousering his speaker's fee from his jolly in Malta, and boozing through the night, UKIP was already going backwards.

This is the best that UKIP could do yet, in both absolute number of votes and share of the vote, the party slid backwards. The Tories have beaten them off with 17,431 votes, taking 45 percent of the vote, with suggestions that the Lib-Dems voted tactically to keep the usurpers out. Seemingly, it isn't only UKIP that can play games.

My view is that UKIP is a busted flush. The euro-elections will be seen as a high-water mark and it's downhill from there. It needn't be this way, and in politics nothing is pre-ordained, but that is the way it looks from here.

Possibly, the situation is recoverable, but Farage has neither the skill to diagnose the problem nor the will to do anything about it. The Grand Old Duke of Westerham marched his troops to the top of the hill, and now he's marching them down again.

It's actually a shame, but the moment Farage thought he knew everything and stopped listening, this was always going to happen. In politics, the demagogue can always make the running for a while - Mosley is as good an example as any.  But what sustains politics - and political parties - is ideas, and ideology.
Now we know all about the intellectual bankruptcy of the "Lib-Lab-Con".  That's why there was a market gap - room for a challenger with fresh new ideas. But when you end up with a party led by a chancer, bereft of new ideas and, as Delingpole pointed out, totally without an "ism", it really wasn't going to go anywhere.
One of my seminal moments, in my understanding of how the world works, came with the essay by the Friedmans on their barking cats, where they pointed out the inviolability of institutional biology. Institutions have unbreakable rules by which they work. They obey the rules because they must.
The thing is, politics has rules as well. Political parties work in a certain way because they must. And no matter where you go in the world, in many different cultures, you will find political parties. And they all work in roughly the same way.

You can, however, break the rules – for a time. Like Icarus, you can fly too close to the sun, and for a while it looks as if you can get away with it. Sooner or later, though, the wax melts and the high-flyer plummets to earth. Farage has broken the rules - he cannot survive.

Nevertheless, the bully in him can carry the day, by the sheer force of his personality. But he really cannot get away with it forever. If we are to apply some military metaphors – appropriate on this day, Newark was the Tory's Normandy, the day when it returned to the battle. But it was also Nigel von Paulus's Stalingrad.

UKIP is a defeated force, and the long retreat is about to begin. There is more analysis here and here - as well as here. And I haven't even looked at the legacy media yet.