Flexcit: a report from the front 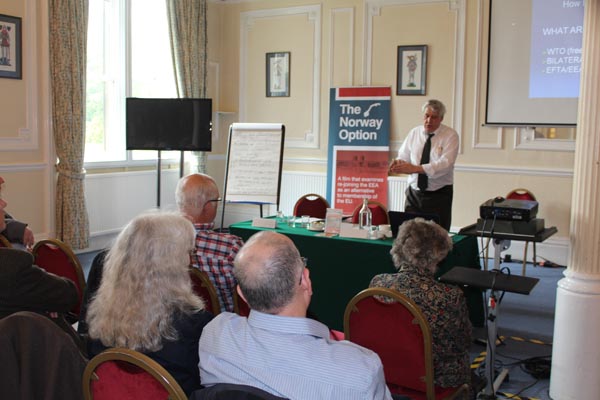 Although asked to do a report of the CIB seminar at Harrogate yesterday, I've found it difficult to look at the event objectively. Strangely enough, I came away from it rather depressed. For sure, I was on form. I gave a good presentation and, according to the course assessments returned, it was well received.

But "Flexcit" is unfinished work. There are major gaps and weaknesses in it, of which I am only too well aware. And, while I am convinced that we have the basis of a workable plan, there is a long way to go before it is finished and all the pieces are in place.

At this point, therefore, there is nothing that brings me closer to thoughts of murder than the occasional sage in the crowd telling me I must "simplify the message" when as yet I can't even tell you, in its totality, what that message is.

The time for simplification comes when you have done your detailed research, written out your case in longhand, argued it, refined it, and tried it out with small audiences, further refined it and filled in the gaps. Then, from the totality of what you have – and only then – can you distil it down to the essentials. The end product, like a fine, matured brandy, is impossible without starting with a million squishy grapes.

Even then I still wonder. Yesterday, I made the case that the process of globalisation is under way. We need to break away from "little Europe", I said, so we can take an active part in it. Only then, outside the EU, can shape the agenda and help control it. Despite than, I was later told: "It [my talk] seems to be all about a step to world government".

Actually, it's about governance, not government. For some issues, we need governance on a global scale. What we don't want is a global government. We don't even want a European government. But if you spend over an hour explaining the difference, and one of your audience then complains that I seem to be promoting a march to global government, there is what one might term a failure of communication.

On another issue – the repatriation of the CAP – I explained that the EU policy, in its current shape, was now tied to the seven-year multi-annual framework.  Furthermore, agriculture is a capital-intensive industry and farmers and growers need as much policy stability as we can give them.

Probably, I suggested, we will find ourselves leaving mid-cycle, so it would be best for agriculture to let that cycle run to its natural end. Then, the next seven-year cycle is going to a transition phase, so you are going to come to the end of that cycle before you have made any significant steps away from the CAP.

With that said, I got the observation that the British public would not accept a delay of 14 years before we are able to get rid of the CAP. And that is despite that fact that I have already said that the current reforms have made the CAP a very different animal from that which was originally conceived. It is now not a million miles from what we ourselves might devise as an interim measure.

The trouble is that, even with the best will in the world, there is too much for people to take in, all in one go. And this was very evident with immigration. I was asked whether we could negotiate a deal on "freedom of movement" – an integral part of the EEA agreement. "No", I said. The EU has made itabsolutely clear that this is non-negotiable.

But, I then said, "freedom of movement" is not the issue. We can live with that, to an extent, if we go back to the original meaning of the treaty, which talked about free movement of workers. There was nothing about their dependants, their families, and "useless mouths". They do not come because of the  EU, but courtesy of the Council of Europe and the ECHR.

In other respects, the bulk of immigrants still comes from outside the EU (although a lot of third country migrants come to us via the EU), so leaving the EU is not going to solve all our problems. In fact, most of the problems will remain after leaving, and we will need to find separate solutions.

What in particular I railed against was the idea of selling simple solutions to complex problems. We must not fall into the trap of promoting populist nostrums, which can so easily be debunked, only for the perpetrators to drag down the entire anti-EU movement.

In that context, I raised the problem of the current humanitarian crisis in the Mediterranean, only later to have someone tell me that the Malaysians and Singaporeans sorted out the boat people "tactics" 30 years ago. No one was allowed to land but the boats were reprovisioned and repaired and then sent on their way.

This, as I recall, was the treatment of the Vietnamese boat people, but that was dealing with people who had departed their country of origin and could, in extremis, be returned to it. In the current crisis, we have people from all over Africa and Asia, gravitating to Turkey on the one hand, and thence to Greece, or finding their ways across the Sahara and thence to Libya, when they make the crossing.

In any event, the Vietnamese refugees responded by deliberately sinking their boats once they had been spotted by the authorities, to stop the authorities towing them back out to sea. As a result, they had to be rescued, but to avoid a humanitarian crisis, western countries rallied round and many of the refugees ended up settling in the United States and Europe. The United States accepted 823,000; Britain took 19,000; and France 96,000; while Australia and Canada accepted 137,000 each.

The differences in the current crisis, though, make for a different problem. Different problems require different solutions. We could not return the boats to whence they came – they are not wanted there. Therefore, what worked from Malaya and Singapore – and then only to a limited extent - will not work for Europe now. Neither will other solutions (such that they are) which work for Australia and Japan necessarily work for the UK.

The trouble is, it is very easy to knock off sound bites, and to come up with beguilingly simple nostrums, which seem so attractive and easy when spelled out. But it takes weeks and months to explore each issue, to learn about them, to assess their potential, and then to deliver a verdict on their feasibility.

The demagogue and the populist, though, are not interested in the detail, and too many people are too easily seduced by their plausible nostrums, even though they lack depth and practicality. That leaves those interested in serious, workable policy always on the back foot, well behind the torrent of shallow, well-meaning but flawed ideas.

Offering correctives, it therefore seems to me, is going to take very much more than a few hours of discussion in the comfortable surrounds of a provincial hotel. I opened my talk with the suggestion that the Europhiles were trying to confuse the issue – but we're doing a grand job of doing that ourselves.

Where we go from here, I am not yet sure – but at least we have time to work out our tactics and approaches. The game is by no means over, and we are far more advanced than were our equivalents who fought the 1975 referendum.
FORUM THREAD