EU politics: it looks to be Christine Lagarde 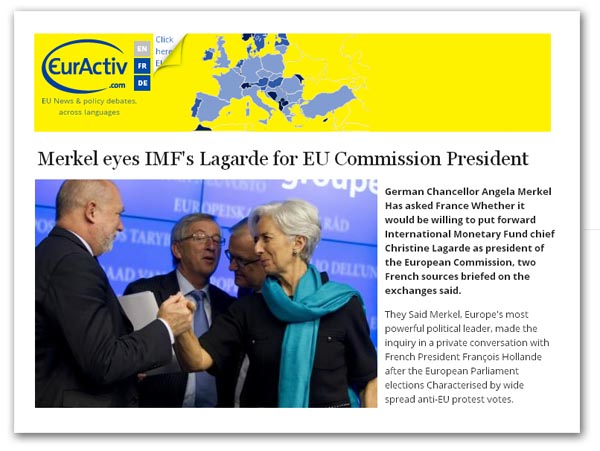 From the very start, I've been convinced that the new European Commission President would not be Juncker. It was never going to be. And now we have EurActiv firming up on the rumours, putting IMF managing director Christine Lagarde in the frame.
You're getting the usual low-grade speculation from the Muppet Media, who hadn't seen this coming, and have to invent a narrative to cover their lack of awareness, but – according to EurActiv, Merkel has already had a number of private meetings with Lagarde, one in early May – well before the current hullaballoo.

The London-centric hacks have largely been buying the Juncker line – even though he is said not to have wanted the job and was merely a stalking horse, there to keep Schultz out of the running. The self-important Economist even wants us to believe that Merkel is losing her touch.

However, The Times, belatedly, has picked up on the story, telling us that Merkel herself has suggested the IMF head for the Commission post. Britain, says the paper, "would be delighted at such a move, which would mean Jean-Claude Juncker ... being passed over in favour of the conservative former French finance minister, who is close to George Osborne".

Thus, Cameron gets his "victory" and the British press can run the story of how Merkel is finding this "hugely embarrassing", because it "contradicts her claim on Monday that she was trying to ensure that Jean-Claude Juncker received the necessary support". That, of course, only works if you took Merkel's expression of support at face value – not a good idea when knowledgeable sources in the German media were not buying the story.

With the Telegraph trailing behind the pack, all we need to do is wait for it to "discover" Lagarde, and we will learn that it knew all along that she was going to be Commission president. Meanwhile, the Guardian is still selling the "biff-bam" version of events, having Cameron "locking horns" with Merkel.  They really are children, these hacks.

Oddly enough, Spiegel has caught the disease, profiling Juncker. It is talking of Cameron's "empty threats" and of him "backing the wrong horse". "Only Merkel can save him", the paper says. The rest of the German press, though, seems to have gone dark, the main Merkel story being about her mobile phone being hacked.

Juncker is not any more in the Berlin spotlight, and Lagarde has not yet emerged as the victor. And only in one tiny corner of the French press do you get a slight clue that it is a done deal.

Nevertheless, done deal it may well be, which means Merkel will have saved Cameron's face.  Unless there is another "play" going on - so devious that no-one has even had a sniff of it - Mr Cameron can start carving a notch in his toy gun and working out what price he will have to pay for his "victory". And, in the "safe pair of hands" of Christine Lagarde, the project will go rolling on.

All this subtlety, however, will pass by the public, even though the titular head of the government of Europe is being selected. As the Telegraph records, most British voters (99 percent) have never heard of Juncker. Most, in fact, would struggle to tell you what the European Commission was, and even more – including the Telegraph - probably don't know that the European Parliament has the last word on the choice of candidate.