EU politics: joining the ranks of the misinformed 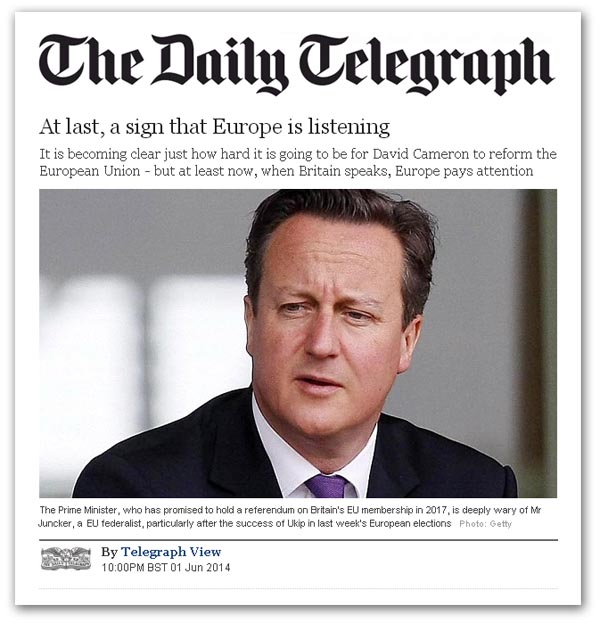 It was only a week ago that we were writing that the legacy media was no longer capable – if it ever was – of offering serious commentary on political issues.

No more does this apply than to EU affairs where, as Witterings from Witney observes, the Telegraph continues to make schoolboy howlers. In this case, the leader is telling us that the Europe's leaders, "have the final say on the appointment" of the president of the European Commission.

This is not a minor, technical error. We are seeing the first contest under the new Lisbon Treaty rules, where the nominations for president are made by the European Council, who is then elected by the European Parliament, by an absolute majority.

The European Parliament, therefore, has "the final say", demonstrating – and not for the first time – that the Telegraph leader writers have not caught up with a treaty that actually came into force over five years ago.

The particular relevance of the EP involvement is that the outcome of the contest depends on the interplay between rival institutions, making it far more complex and subtle than the Telegraph would have it, effectively ruling out the newspaper as a serious commentator – which is where we came in.

With rather more optimism that I will allow myself, WfW has written to individuals on the newspaper, but the likelihood of them responding is slight. The pig-ignorance displayed by media writers stems from an overarching "arrogance of office", in which they are so convinced of their own rectitude that they no longer need to learn anything, or listen to lesser mortals.

Thus, talking to newspapers is a dialogue of the deaf. Like politicians and other "above the line" entities, they are on permanent transmit, and have no "listen" button.

The arrogance comes in when these people, afflicted by the most profound but self-imposed ignorance, seek to instruct or guide us on matters about which they know so little. As we saw with Matthew Parris yesterday, their analyses are worthless.

The sadness of it all is that so many readers have not yet fully appreciated the extent to which the legacy media has become degraded and is no longer a reliable source of comment – or even news. Too many people are still prepared to take what they read at face value.

For the record, it seems to me that all the newspapers are playing it wrong on the Juncker affair. I think you have to take account of what the broad spectrum of the German press is saying. Combine that with a basic understanding of the dynamics of EU politics, and it is pretty certain that the former Luxembourg prime minister doesn't stand a chance.

Latterly, it now seems that, the way it has been handled, even if the European Council came out in support of Juncker, the European Parliament could not now command a majority.

There is talk of Christine Lagarde, head of the IMF coming through the middle as a compromise candidate, despite continuing investigations for corruption. And the British media is also besotted with the idea that Blair might apply.
As it stands, I think the controversy of Juncker is being allowed to run, giving Cameron "profile". Then, when Juncker is dumped, as was always the intention, the British prime minister will be allowed to proclaim a personal victory, while the real candidate strolls in the back door uncontested. Britain, so the legend will go, is being "listened to". As always, though, we will have been played, with the media too stupid to realise what is going on.

All this leaves the British public singularly ill-formed, but with the option of reading the newspapers and converting themselves into the ranks of the misinformed. Even then, I have to say, reading this blog for most of them is not an option ... after all, what do bloggers know?

Certainly, as Complete Bastard notes, integrity is a waste of time. You get more hits producing gushing UKIP fanboy copy. Accurate information does not command a premium.