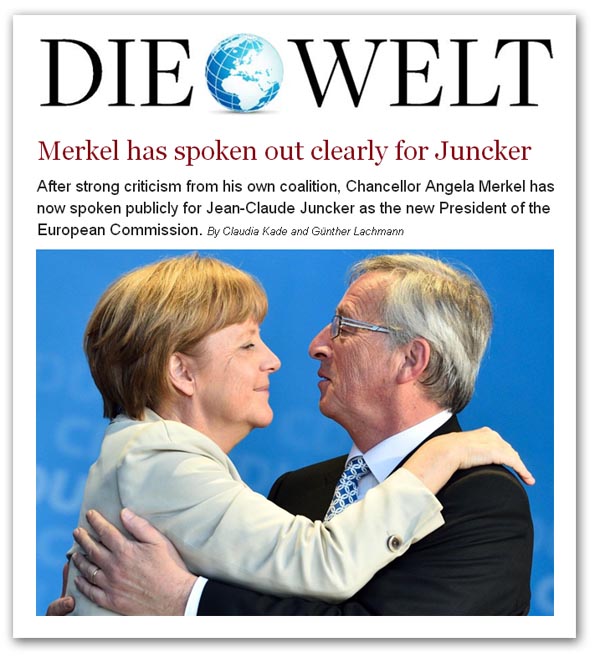 Very much ahead of the field in the English press, the loss-making Guardian is following the Commission President story, telling us that Merkel is, after all, backing Juncker.

This move, says the paper, "deals [a] blow to David Cameron's attempts to block Luxembourg's former prime minister from taking up the role. And this is based, on reports that the German chancellor said at the National Catholic Congress in Regensburg: "I will now lead all negotiations in the spirit that Jean-Claude Juncker should become president of the European Commission".

The Guardian can be forgiven for taking this line as some of the German media are saying much the same thing. Die Welt is headlining that Merkel "has spoken out clearly for Juncker". This paper then quotes CDU MEP Elmar Brok, saying that "we should now try to Cameron to get into the boat … and this boat is called Juncker".

Spiegel online, however, is taking a more nuanced view, suggesting that Merkel is playing to her domestic audience in an attempt to keep Juncker fans happy, but is in fact buying time for a compromise candidate to emerge.

All this is getting rather interesting. For the first time, we are seeing the new Lisbon Treaty procedure playing out. Under Article 17 of the consolidated treaty (TEU), the European Council has to propose a candidate, under qualified majority rules, but the last thing she wants is a direct confrontation with other member state leaders – such as Cameron - forcing a contested vote.

On the other hand, it is the European Parliament which has the final word, having to elect the new Commission President by a majority of the component members, i.e. at least half of the 751 MEPs – 376 in number at present.

If the nominee does not get the required majority, the European Council is back in the frame. Again under qualified majority rules, it then has a month to propose a new candidate, who again has to be elected by the European Parliament by a majority of the component members.

The last thing the "colleagues" want is a prolonged contest, and neither do they want an open rift which weakens the block vote in the Parliament, allowing the dissident MEPs to make mischief.

Spiegel and also Süddeutsche, therefore, rely on the exact wording of Mrs Merkel's statement, where she says that she will engage in talks, "in the spirit that Jean-Claude Juncker should become President of the European Commission". The key words, apparently, are "in this spirit" and "should be", together taken as evidence that Merkel is hedging her bets, especially as she is saying Juncker "should" rather than "will" get the job.

Merkel's strategy, we are told, is now to involve the European Council in a "comprehensive discussion", but there is also room for horse-trading with David Cameron, supporting him in his pursuit of taking back powers from Brussels – without, of course, offering him anything bankable.

Interestingly, even the Financial Times is accepting that Mrs Merkel may decide against Mr Juncker, on the baisis that he cannot win the majority support of the European Council. And she is said to hold private reservations, seeing Juncker as an old-school europhile, not a "technocratic" politician who would carefully balance interests, as she does.

Thus, it still seems that we're on course to see Juncker dumped, and an as-yet unknown compromise candidate come to the fore. The Council has until July to make up its mind, which should keep us entertained for some time yet. In the meantime, as FAZ reminds us, it is a question of "thoroughness before speed".

Whatever the huffing and puffing from the Parliament, member state governments only have to "take into account" the result of the European elections, but they are not bound by it, legally or politically. And Mrs Merkel has just signalled that she is not going to be rushed into a decision.