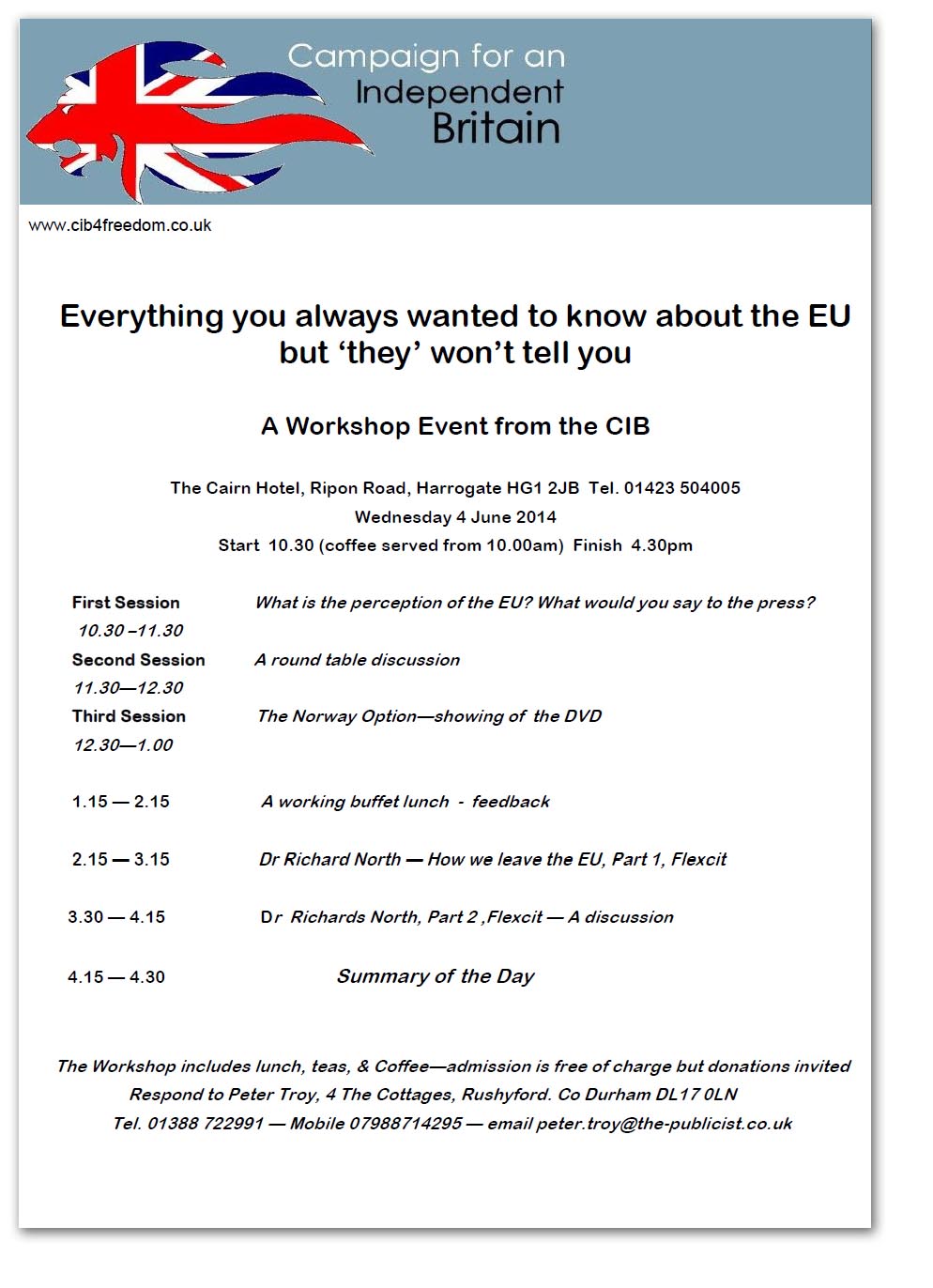 Next Wednesday, courtesy of the Campaign for an Independent Britain (CIB), we will be launching the first of a series of seminars on the EU – click flyer (left) for details. The day session is directed mainly (but not exclusively) at the business community and is free of charge, making it rather better value than the seminar planned by the Continental Drift at Ł1,800 per person.

I am taking the afternoon session, when my talk will be based on an expanded version of my successful presentation in Iceland. It was there that I first outlined in public some of my ideas for how we might leave the EU.

Needless to say, this heightened activity is bringing the wreckers out of the woodwork. Already, there is an active e-mail campaign, where the groupuscules have convinced themselves that Booker is variously taking instructions from the Barclay brothers, and or is an MI5 "sleeper" with myself as his handler.

These are the people who now aver that EUReferendum, Witterings from Witney and other such blogs are "usually product of MI5's RICU (Research Information Communications Unit)" aimed at "sabotaging the retrieval of our democracy".

And so incensed is one of them, Lynn Atkinson, wife of Rodney Atkinson – who has never forgiven Booker for having "betrayed Jimmy Goldsmith's Referendum Party at the last minute" and "sabotaged" his own "election as UKIP leader" - that she is planning to come to Harrogate, telling us that when she saw the flyer, she "thought it had been devised by the European Movement!".
This is a flyer, incidentally, which advertises my talk on how to leave the EU but, according to Mrs Atkinson (and many hundreds like her), "Dr Richard North not only does not know how to exit the EU" - he "DOES NOT WANT TO EXIT THE EU!" (her capitals).
Thus, she tells us, "I shall certainly be attending in order to contradict him loudly and stop him doing even more damage than he has already done, just when Britain has made up its mind at last (too late now, the invaders outvote us in London and soon will all over the country)". The latter is hugely ironic coming from a South African immigrant of Irish origin.

For us, though, this rhetoric is nothing new – it is a continuous and continuing backdrop to everything we do, a hard core within UKIP and alongside it, comprising in part manic Christian fundamentalists who combine Islamophobia with scarcely-concealed racism of such an intensity that it would frighten off the KKK as too extreme.

These are the people, alarmingly, who form a hidden "Praetorian Guard" within UKIP, a constant threat to Farage. With the support of much of his inner circle who share their values, they keep him on the "straight and narrow".

It would be wrong to say that these people run UKIP – they do not. But their influence is pervasive, writ through the DNA of UKIP and inseparable from it. And there is nothing unreal about their hatred of "non-believers" such as myself who made the "mistake" of putting up two Islamic candidates for UKIP at the 2001 general election.
Now that I contradict their mantra of overnight repeal of the ECA as the only way to leave the EU, disbelieve the "fact" that the EU is a Nazi plot, and support the "trap" of Article 50, I am totally beyond the pale. That I am prepared to contemplate negotiation with the EU is treachery of the highest order.

Over on Autonomous Mind, you will see some words of wisdom on how we should construct our referendum strategy, but to the Praetorian Guard, such words are the vilest of heresy. Reasoned argument simply invokes a hatred that you could cut with a knife as they spread their conviction that anything short of immediate, unilateral withdrawal from the EU is written by or for MI5 with the intent of keeping us in the EU.

By comparison, their "dislike" of EU is relatively mild. They direct most of  their energies and tenacity to the pursuit of "traitors" and "saboteurs" such as myself. We are the true objects of their hatred, our primary qualification for attracting their ire being that we do not wholeheartedly agree with them.

This, sadly, has been going on for decades, an enormous expenditure of energy which spills out into countless poisonous briefings, snippets of which even find their way onto this blog's comments and the forum, their immediate authors often unaware of the original source. They achieve nothing but to hamper those who are seeking to take the fight to the real enemy. But then, to the Praetorian Guard, we are the real enemy.

With that, even if Mrs Atkinson is not there in person in Harrogate next week, she will be there in spirit to remind us of how much we are hated for daring to take on the EU in a way of which they do not approve. Unwittingly, though, they are of huge assistance to us all. By comparison, they make fighting the EU look easy.

One recalls in this context the words of the American poet Maya Angelou, whose death was announced today. In her poem, I rise, she writes: "You may shoot me with your words, You may cut me with your eyes, You may kill me with your hatefulness, But still, like air, I'll rise".

I too will rise. I will be in Harrogate on Wednesday, come what may.