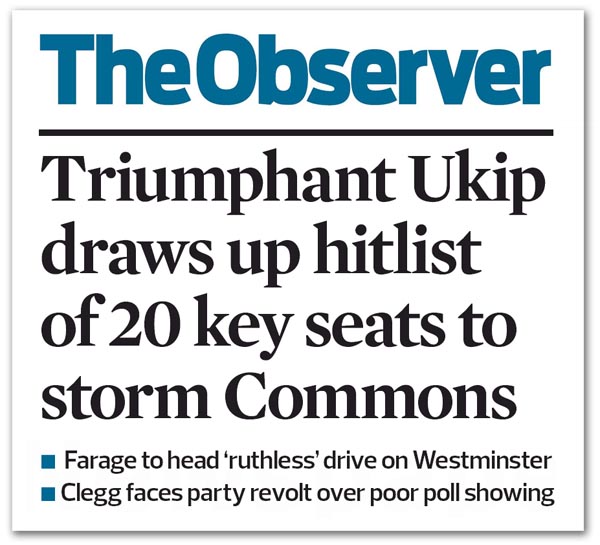 Look at one of the articles on Mail online and you see the headline: "Tories rattled as top peer Ashcroft predicts Labour will comfortably win General Election despite Clegg being the biggest loser this weekend".

Then cut to the commentary on the poll to which the article refers, and you see Lord Ashcroft writing: "don't forget this is a snapshot, not a prediction". Later in the same article, he writes:

First and foremost, and at the risk of repeating myself, this is a snapshot not a prediction. There is still a year to go, and as I have found in the Ashcroft National Poll, only around half the electorate has definitely decided which party to vote for.

So, the man who actually commissions the polls stresses that the work is a "snapshot", and that he isn't making a prediction. Yet Brendan Carlin of the Mail knows better and different, deciding that Ashcroft is making a prediction.
What this does therefore, after the crass reportage of the UKIP "earthquake", is provide yet further evidence – if more was needed – of the inability of the legacy media to offer sensible commentary on political events.

More important than actually reporting the news, it would seem, is the desire to promote a narrative, and this we also see with the Sunday Times. Today it has been running for its front-page story the "news" that loser David Davis has called for an EU referendum in 2016.

Davis, we are then told, has "warned" that the Conservatives' current stance on the EU lacks "both clarity and credibility", only for the newspaper then to milk Adam Afriyi for a comment, whence he obligingly says two thirds of people want an EU vote before 2017 and "it is right to reflect on bringing that date forward".

The point here, of course, is that Mr Cameron has rejected a referendum on the Lisbon Treaty and, under considerable pressure has conceded to an "in-out" referendum, on the back of renegotiating our "relationship" with the EU.

Under still further pressure, Mr Cameron has committed to a referendum in 2017, even if the negotiations are not yet concluded – which the cannot be if the outcome has to be a treaty.

However, for there to be a 2016 referendum, arrangements would have to be started almost as soon as the 2015 general election was over. For sure, negotiations could be conducted simultaneously, but the chances of anything meaningful being concluded in time for a referendum is remote.

In effect, therefore, asking Mr Cameron to offer an early referendum is effectively to ask him to go into the poll with nothing to offer by way of an improved relationship. In all but name, it would be the Lisbon Treaty referendum that he had previously refused, but with an "in-out" instead of a "yes-no" label. This is something that could hardly be conceded.

For a number of minor MPs thus to ask for what amounts to the impossible, therefore, is not serious politics. To set up a story based on this alone is not serious journalism, yet that is what we are getting from the legacy media.

We get a similar level of banality from Toby Helm in the Observer, who wafts in to tell us that, from the local elections just past, "Nigel Farage had been expected to grab between 75 and 100 extra councillors at best, but added nearly 130".

In fact, the current tally is 163 seats, out of a total of 4,211 so far declared (very nearly all of them), amounting to less than four percent (3.87%). But, given that UKIP was supposed to be on a roll, and took 6.1 percent of the seats contested last year, the expectation should have been considerably more than 250 (London effect notwithstanding).

For "surge", therefore, read "decline" and, while there may be credible reasons for this, while still arguing that UKIP is making progress, nothing of this is offered by the egregious Helm.

Thus, if you want serious comment these days, it really does look as if you have to go elsewhere. No one is asking for perfection, and political analysis is a hard task which does not lend itself to easy answers. But we really do need to be spared the juvenile approach of the legacy media claque, who have less to offer as the days go past.