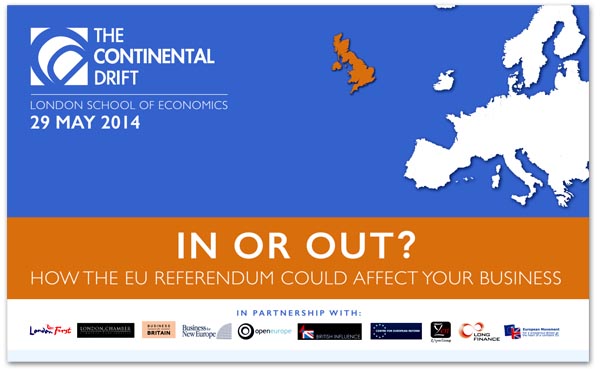 While some claimants to the anti-EU mantle are dickering about a meeting, an enterprising group of opportunists, going under the name The Continental Drift are setting up their own meeting to discuss the impact of an "in-out" referendum, under the title of, "In or out? How the EU referendum could affect your business". It is to be held on 29 May.

Apart from the incredible price tag of Ł1,800 per head (including VAT), what is interesting is the group of organisations that have been brought together for the event.

For what is quite obviously a Europhile bash, under the aegis of the LSE, we a number of business interests and "the usual suspects": the European Movement; British Influence; Centre for European Reform; and Business for New Europe. But we also have the so-called "reformers", Open Europe and Matthew Elliott's current meal ticket, Business for Britain.

Speakers are also drawn from the ranks of the usual Europhile suspects, such as Ronald Rudd, Hugo Dixon from Reuters, Stephen Wall, Charles Grant, Vernon Bognador and Peter Wilding. But we also see - as well as Mats Persson – the unlikely figures for such a gathering, of Ruth Lea, Tim Congdon and John Mills, co-chairman of Business for Britain.

Unfortunately for the potential attendees, they are not going to get much value for their money. Having, for instance, people like Bognador to pontificate on, "How could 'leaving' look? An overview of the potential process and scenarios for exit", is not going to give them anything like the state of the art, on the issues.

That is the mistake that big-ticket conference organisers so often make. They go for the "prestige" rather than the intelligence. But having Mats Persson lecture them on, "The future of the EU in the context of the eurozone crisis and the emergence of a 'two tier' union", is going to be a waste of everybody's time.

In a way, though, the fact of this conference is encouraging at several levels. Firstly, the Europhiles are going to be poorly advised and misled, because they put such great store in prestige. Secondly, although they will be better funded than us, their expenditure will be higher and they will get less value for money.

Thirdly, is allying themselves so closely with the "inners", the likes of Open Europe and Business for Britain have shown their hand. It will be ever harder for them to claim eurosceptic credentials, or claim to be part of the "out" campaign.

Finally, that a commercial outfit thinks that enough people (or businesses) will pay absurd amounts of money to discuss the EU referendum suggests that we are not altogether out of order in seeking to set up our own meeting. That certain parties think that one is not "appropriate" at this stage probably says more about them than us.