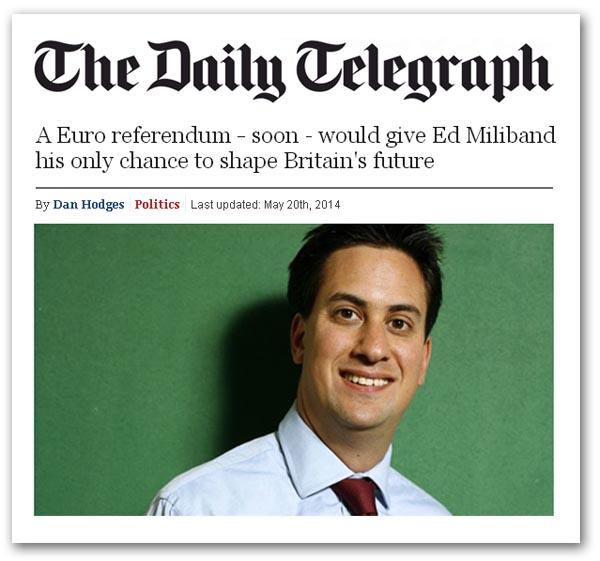 All we can say is thank goodness the media and the political classes are so far behind the curve, and so locked into their near impenetrable bubble that they are cut off from basic political intelligence that keeps us mere mortals so much better informed.

Just how far behind the curve these Muppets are you can see from 22 October 2012, when I was writing: "I would not be at all confident about winning a referendum - not that there is actually going to be one this side of a general election".

With many, many more references to the potential for losing a referendum, there is absolutely nothing new that Hodges has to offer when he now suggests that if we had an early referendum, we the "outers" would lose.

What is new is that Hodges thinks Miliband will lose the 2015 general election, so he believes the Labour leader might just as well throw his lot in with Cameron and call for a referendum at a time, and on terrain, of the "pro-European" camp's choosing. This, he believes, should be at the same time as the general election.

The most compelling reason of all for holding the referendum within the year says Hodges is that now is the moment of maximum opportunity for the pro-European camp.

Last Sunday, he reminds us, Bill Cash wrote a piece for the Sunday Telegraph, declaring: "Nigel Farage is causing untold damage to the cause of opposition to European political integration. He is the problem. By his divisive rhetoric he is toxifying the debate".

Hodges then tells us that UKIP's naked racism is "contaminating the Eurosceptic brand", while David Cameron's calls for unsentimental engagement with Europe "are having an impact".

By 2017, though, Hodges believes that Nigel Farage will be gone as UKIP leader. His people's army will have been disbanded. David Cameron will probably be presiding over a party that enjoys a wafer thin majority. The government will be mid term. The self-discipline imposed by an impending general election will have dissipated. And under such circumstances the "pro-European camp" could actually win.

Actually, Hodges is probably wrong about losing a referendum in 2017. The "outers" are irrevocably split, and there are few if any indications that the groupuscules are prepared to put egos and personal ambitions to one side, and unite around a common plan to beat a common enemy.

Furthermore, without or without Farage, UKIP will still be around in 2017, having had several more years of "contaminating the brand". They will be doing even more damage than they have done already, with the aid of the media which is fronting UKIP as the representatives of "eurosceptic" sentiment..

What is particularly inept of UKIP is that, by nailing their flag to the anti-immigration mast and then by positing that leaving the EU is the solution to the immigration problem, they have effectively ruled out the only short-term option – re-joining the EEA – that would enable us to extract ourselves.

This was reinforced by former UKIP chairman David Lott who commented on the Booker column, offering the staggering claim that: "The UK never left EFTA and we can simply remain in EFTA if we wish to after leaving the EU". But then he added that UKIP was opposed to retaining membership of the EEA.

I'm actually getting more than a bit sick of this stupidity, and of the negativity flooding out of this toxic party. Over the last year, I have been working intensively on the EU exit plan, and over the last weeks even more intensively. As the plan takes shape, I am increasingly confident that an exit is possible, workable and very much to our advantage.

Furthermore, I believe we are so far ahead of anything the "pro-Europeans" can throw at us that, should we be able to publish the plan when it is complete, and then actively promote it in time for a referendum campaign at the end of 2017, I am certain we could make a credible and attractive case for leaving.

With UKIP "contaminating the brand", however, we can no longer call ourselves eurosceptics. In fact, I have long turned against the use of the term, preferring to be part of the "anti-EU movement", perhaps calling ourselves "outers".

But one of the other errors Farage in particular has made has been to describe leaving the EU as a "divorce". It was well-meant but too abrupt and the term has too many negative connotations. Most people are all too well aware that there is no such thing as an "amicable divorce". What we actually need is a slight parting of the ways, a gentle divergence that increases over time to deliver separation from the EU's political agenda.

There is little prospect, though, of us being able to deliver this as a unified strategy. But that will not stop me trying. As I earlier indicated, the true "outers" amongst us are going to have make our own decisions as to how we win the fight. But, even though playtime has long been over, from the look of it, we are going to get very little help.