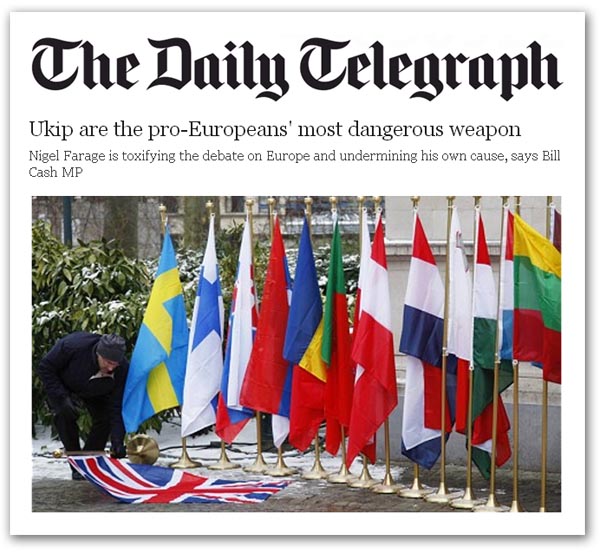 A superb piece from The Boiling Frog tells it as it is:

Let's not beat around the bush. Without a fully worked-out policy and strategy on how to leave the EU, any referendum on EU exit will be lost for those who wish out. It's as simple as that. And should the "outers" lose, it's game over for at least a generation, probably more. We won't have another chance - it won't be a "best of three".

So far, our latest published version of the Flexcit plan runs to 188 pages (60,000 words), and is growing daily. The version I am working on is just short of 200 pages, and will be ready for posting in a day or so.

The people who have read the latest version all agree that it is an easier read than the original, although over twice the length. More space is devoted to illustration and explanation and less is demanded of the reader, so it does indeed work better.

TBF, however, points out that UKIP councillor Suzanne Evans - who defected to UKIP from the Tories - was asked by Andrew Neil on the BBC's Sunday Politics if UKIP had published a "roadmap" if the vote was a yes to leave. Suzanne Evans's response was; "wouldn't that be great?" Well yes it would actually, says TBF, which begs the question as to why has it not been done.

No such doubts exist amongst the many commenters to the Booker column, who have reacted with almost uniform hostility to the suggestion that neither UKIP nor anyone else could take back control of our borders so long as we wish to continue trading with the EU's single market.

This is exactly what the Swiss are finding. An agreement on free movement of persons between the EU and Switzerland came into force in 2002, as part of the raft of bilateral agreements that govern trade relations. The result has been that 23 percent of the Swiss population in now foreign, compared with 13 percent in the UK.

In the referendum on 9 February, however, the Swiss people voted to apply quotas to migrants from EU member states. Implementing legislation for this initiative will now have to be enacted by the Federal Council within three years. The Federal Council has indicated that the first stage of the legislative process (Vernehmlassung, comparable to a Green Paper) is to be expected this year.

But, if the government does apply quotas, it will find that the "guillotine clause" kicks in which means that all the other bilateral agreements fall. Either way, there is going to have to be a fundamental renegotiation, as the current "Swiss-style relationship" with the EU is no longer tenable.

And time after time, as we have pointed out in Flexcit, the EU has made it clear that the UK could expect no better deal that the Swiss, while at the same time a procession of commissioners and member state politicians have made it absolutely clear that adoption of free movement of persons is non-negotiable. If the UK wanted a Free Trade Agreement with the EU, it would be conditional on the UK agreeing free movement of people.

It then goes without saying that, if the UK wanted to rejoin the EEA, it would also have to adopt the four freedoms, of which free movement of people is an integral part.

In response, we get no end of commenters relying on the mantra that we have a trade deficit with the EU, so they would waive their own rules in order to keep the trade flowing. But there is no evidence that this would be the case, and since all our indications are that the EU would stick to its free movement demands, we can only assume that a trade deal would prevent us reassuming control of out own borders.

And to this, of course, we must add the restraints imposed by the ECHR, implemented by virtue of our membership of the Council of Europe, together with the 1951 Convention on Refugees and the 1967 Protocol, plus regional implementation agreements brokered through the ILO and UNECE, the OECD, G7 and G20.

Yet, in raising these issues, Booker has invoked an extraordinary degree of hostility from UKIP supporters, and more so from those who have sought unsuccessfully to defend UKIP's failure to produce a credible exit plan.

The attitude had Witterings from Witney comment on how difficult it was to entertain dialogue with UKIP supporters, a phenomenon that has Bill Cash arguing, with a great deal of justice, that Nigel Farage (and UKIP supporters generally) are "toxifying the debate on Europe" and undermining their own cause.

I've not always seen eye-to-eye with Bill Cash and I suppose, if the legends about me are to be believed, be totally hostile to him. He did after all, during a period when I was working for him, summarily fire me. But it says something for my ability to hold a grudge, that I can't even remember what it was all about. And we've met many times since, on perfectly amicable terms.

Anyhow, Cash makes some perfectly valid points, and after the behaviour of UKIP supporters on the Booker column yesterday and Saturday, any vestiges of sympathy I might have had for the party have completely evaporated.

Boiling Frog is perfectly right in saying that UKIP's current stance will lose us the referendum, if and when we have one, so the choice is increasingly becoming clear: it's either the party or EU exit. The two are no longer compatible.

Alarmingly, though, UKIP supporters seems to think that their aggressive boorishness is the way to attract wider support. Yet, as they have made no attempts whatsoever to engage, they are going to find that the uncommitted, on whom we rely for a majority, will melt away. And I will not be alone in being mightily relieved.