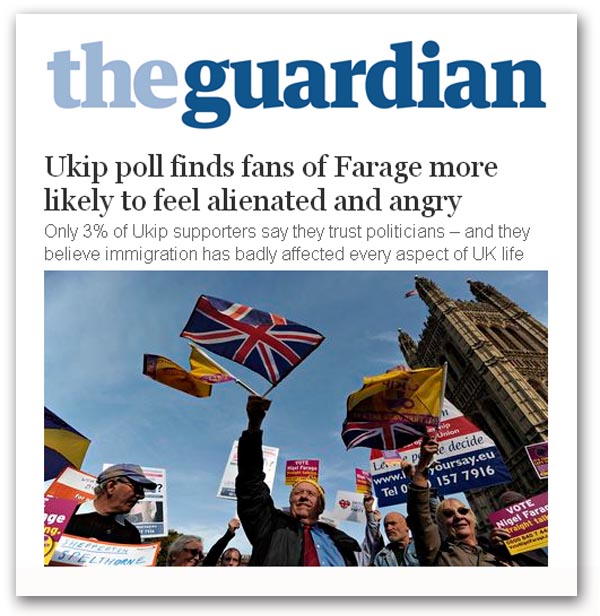 Then, indicative of why they won't buy Mr Cameron's referendum offer, we learn that only three percent of UKIP supporters say that they trust politicians and only ten percent trust the government, compared with eight and 15 percent respectively for other people.

The research, conducted by Opinium for The Guardian among 2,000 voters last week, showed 92 percent of those planning to vote UKIP in the European election agree with the statement "mass immigration is making parts of the UK unrecognisable and like a foreign land" while 81 percent believe that immigration from Europe has been generally bad for the UK.

Immigration remains the dominant issue for UKIP voters: 74 percent say immigration is an important issue compared with 47 percent of all voters. Three-quarters of new UKIP supporters cite immigration as the chief reason for joining Farage's party, and not the EU. And typically, UKIP supporters believe that 38 percent of the UK population are immigrants – three times the actual figure.

This points to exactly that which we have already surmised – that Farage has set his stall out to attract people disaffected by successive governments' immigration policy, becoming exactly the "BNP-lite" that we have been seeing for some time.

Of at least equal concern, this would suggest that UKIP is no longer primarily (if at all) an anti-EU party, and that residue of concern about the EU which does survive has been subsumed by the immigration agenda. And that, of course, explains much about the priorities of UKIP, not least its disinterest in producing a credible EU exit plan.

The greater problem for the anti-EU movement, though, is that as long as UKIP is treated as if it represented us, its agenda will distort ours, and potentially alienate those who would support a withdrawal from the EU. What they do and say, therefore, we have to stress that they no longer do in our name.

It would be far better if Farage and his supporters walked away from the EU issue altogether, where currently they risk doing far more harm than good. We have a difficult enough job without having to cut through UKIP's distortions, inaccuracies and stupidities, in order to make our voice heard.