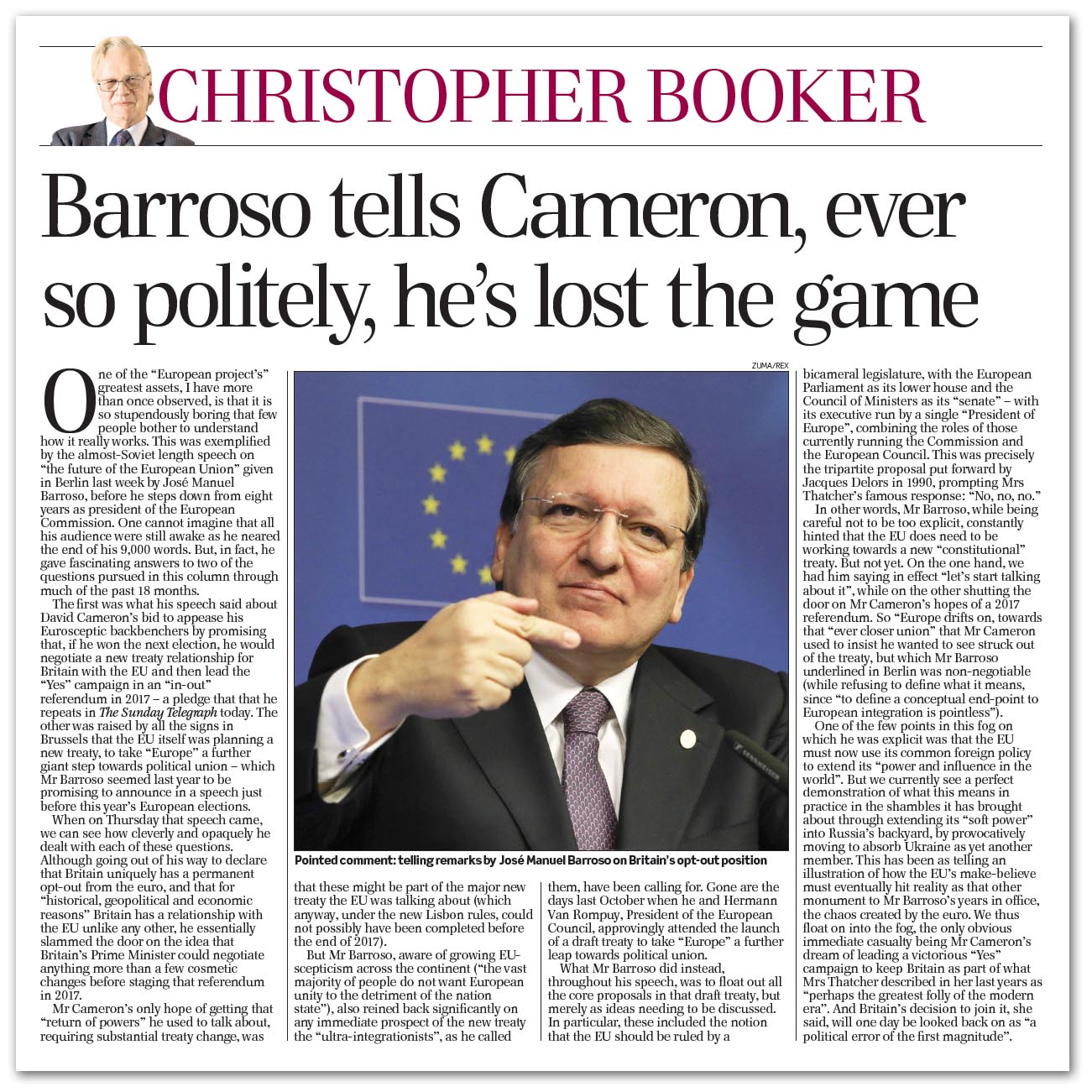 In his report of the 1970-1972 negotiations on Britain's entry into the European Community, Sir Con O'Neill wrote of the press and publicity effort (pp. 52-54) that:

… we were helped by the fact that, towards the end of the negotiations, journalists in Brussels had become thoroughly bored with the multiplicity of highly technical subjects still under discussion and were ready to be content with fairly superficial information.

One of the greatest assets of the "European project", Booker now writes in his column - as he has more than once observed - is that it is so stupendously boring that few people bother to understand how it really works.

This, he adds, was exemplified by the almost Soviet-length speech on "the future of the European Union" given in Berlin last week by José Manuel Barroso, before he steps down from eight years as president of the European Commission.

Had it not been for the efforts of this blog, and then the heroic efforts of Booker in distilling down the content to a manageable length, boredom would have prevailed.

All we would have got in the Sunday Telegraph would have been the front page story that has David Cameron telling eurosceptics "he understands" as he appeals directly to those disenchanted with the EU ahead of the local and euro elections.

This accompanies an authored piece from Mr Cameron wanting us to believe that there is only one party with a credible plan in Europe. He has, he tells us, set out, very clearly, the key areas we are renegotiating on: keeping our border controls; cracking down on benefit tourism; securing more trade; getting more control over justice and home affairs; and getting Britain out of "ever closer union".

Once we've negotiated, says Mr Cameron, "whatever the outcome, the British people will have the final say on our future in Europe, with that in-out referendum in 2017".

And then we have Booker. He like most of us can hardly imagine that Barroso's entire audience was still awake as he neared the end of his 9,000-word marathon. But, in fact, Barroso gave fascinating answers to two of the questions pursued in the Booker column through much of the past 18 months.

The first question relates to David Cameron's bid to appease his Eurosceptic backbenchers by promising that, if he won the next election, he would negotiate a new treaty relationship for Britain with the EU and then lead the "yes" campaign in an "in-out" referendum in 2017 – the very pledge he repeats in today's Sunday Telegraph.

The second question was raised by all the signs in Brussels that the EU itself was planning a new treaty, to take "Europe" a further giant step towards political union – which Mr Barroso seemed last year to be promising to announce in a speech just before this year's European elections.

When that speech came, we can see how cleverly and opaquely Barroso dealt with each of these questions. Although going out of his way to declare that Britain uniquely has a permanent opt-out from the euro, and that for "historical, geopolitical and economic reasons", Britain has a relationship with the EU unlike any other, he essentially slammed the door on the idea that Britain's prime minister could negotiate anything more than a few cosmetic changes before staging that referendum in 2017.

Mr Cameron's only hope of getting that "return of powers" he talks about, requiring substantial treaty change, is that these might be part of the major new treaty the EU was talking about (which anyway, under the new Lisbon rules, could not possibly have been completed before the end of 2017).

But Mr Barroso, aware of growing EU-scepticism across the continent ("the vast majority of people do not want European unity to the detriment of the nation state"), also reined back significantly on any immediate prospect of the new treaty the "ultra-integrationists", as he called them, have been calling for.

Gone are the days last October when he and Hermann Van Rompuy, president of the European Council, approvingly attended the launch of a draft treaty to take "Europe" a further leap towards political union.

What Mr Barroso did instead, throughout his speech, was to float out all the core proposals in that draft treaty, but merely as ideas needing to be discussed. In particular, these included the notion that the EU should be ruled by a bicameral legislature, with the European Parliament as its lower house and the Council of Ministers as its "senate" – with its executive run by a single "President of Europe", combining the roles of those currently running the Commission and the European Council.

This was precisely the tripartite proposal put forward by Jacques Delors in 1990, prompting Mrs Thatcher’s famous response: "No, no, no".

In other words, Mr Barroso, while being careful not to be too explicit, constantly hinted that the EU does need to be working towards a new "constitutional" treaty. But not yet.

On the one hand, we had him saying in effect "let's start talking about it", while on the other shutting the door on Mr Cameron’s hopes of a 2017 referendum.

So Europe drifts on, towards that "ever closer union" that Mr Cameron used to insist he wanted to see struck out of the treaty, but that Mr Barroso underlined in Berlin was non-negotiable (while refusing to define what it means, since "to define a conceptual end-point to European integration is pointless").

One of the few points in this fog on which he was explicit was that the EU must now use its common foreign policy to extend its "power and influence in the world".

But we currently see a perfect demonstration of what this means in practice in the shambles it has brought about through extending its "soft power" into Russia’s backyard, by provocatively moving to absorb Ukraine as yet another member.

This has been as telling an illustration of how the EU's make-believe must eventually hit reality as that other monument to Mr Barroso's years in office, the chaos created by the euro.

We thus float on into the fog, the only obvious immediate casualty being Mr Cameron's dream of leading a victorious "yes" campaign to keep Britain as part of what Mrs Thatcher described in her last years as "perhaps the greatest folly of the modern era".

And Britain's decision to join it, she said, will one day be looked back on as "a political error of the first magnitude".