EU politics: the treaty that never was 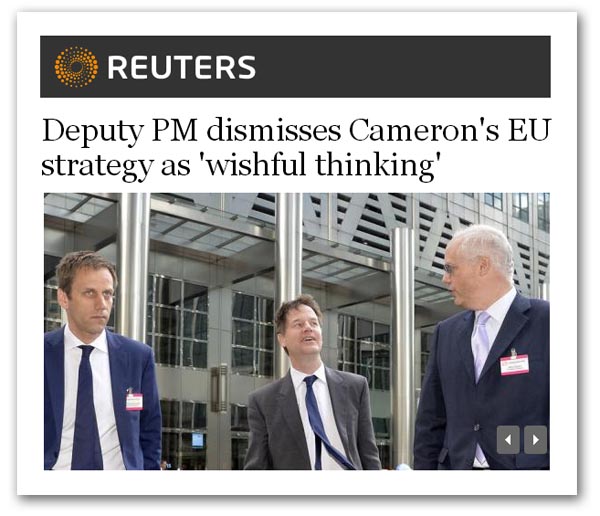 In the annals of EU politics, yesterday will be seen as a turning point  the day when retiring European commission president José Manuel Durão Barroso rejected the prospect of an early treaty revision.

This effectively closes the door on Mr Cameron's ambitions for a "substantial re-writing" of our relationship with the rest of the EU, which Mr Cameron has promised, initially on the basis of hijacking treaty negotiations and superimposing British demands on the proceedings.

Already, it was obvious that a treaty could not be concluded within the 2017 timescale that is on the table, early enough to allow Mr Cameron to hold his referendum. But now, Mr Barroso has closed off any prospect of a treaty, depriving Mr Cameron of even a figleaf with which to enter the 2015 general election campaign.

Already we had concluded that all was left to Mr Cameron was a "Wilsonian fudge", but with Mr Barroso's speech, there can be no doubt at all. Any "renegotiations" that Mr Cameron is able to secure will not produce a treaty change, and will therefore have no binding effect on EU institutions or member states.

All we can reasonably expect now is some highly stage-managed political theatre, which will undoubtedly be assisted by the coincidence of the UK holding the rotating EU presidency in the latter half of 2017.

This brings to mind John Major's plans in 1992 to rescue the Maastricht Treaty after its rejection by the Danes. Between the Birmingham European Council held in the October, and Edinburgh in December, he cobbled together a series of non-binding political "declarations" which were to serve as reassurance to the Danish people and secure ratification at the second attempt.

Then, as now, there was much talk of clawing back powers from Brussels, the "big idea" in this event being a declaration on "subsidiarity", which would be applied to all future Brussels legislation.

Thus agreed in Edinburgh, parts of the statement by John Major to the Commons on 14 December 1992 bears a remarkable similarity to the rhetoric currently employed by Mr Cameron.

Blowing the whistle this time, though, is deputy prime minister Nick Clegg, who has declared that Cameron's plans to renegotiate Britain's ties with the European Union are "wishful thinking and likely to yield only minor concessions that will not unite his governing Conservative party".

That leads us to an extraordinary situation where, if the Conservatives do win the 2015 general election  which is not impossible  Mr Cameron will be committed to fighting an EU referendum on the back of "renegotiations" which will be quite transparently a charade.

However, with Barroso willing to concede that "the case of the UK may be seen as a special one", there may be sufficient support for the theatre to give it a patina of credibility.

Faced with all the establishment political parties supporting continued membership of the EU, and the backing of the print and broadcast media, enough of the public may be gulled into believing Mr Cameron's claims that he has achieved something, and giving him a majority "yes" vote for continued EU membership.

Either way, when we look back on defeat or victory, we will be recalling Mr Barroso's non-words of yesterday, the day when the "fudge" became an inevitability and any semblance of a serious renegotiation - slight though it always was - disappeared from the political agenda.