EU politics: all at sea on mangoes 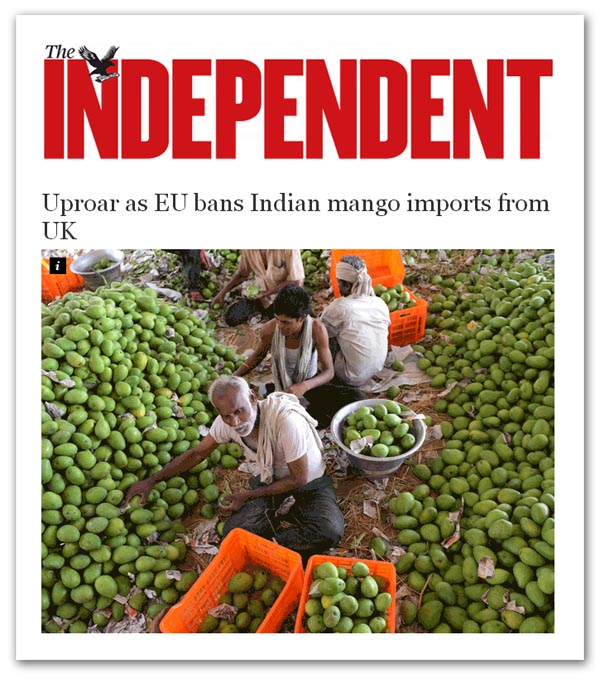 Predictably, as the EU ban on Indian mangoes starts today, we are starting to see some coverage in the British legacy media.The BBC leads with a superficial and ill-informed story, but the most interesting input is from the Europhile Independent.
Cut through the posturing of the Indian media (the few papers that could be bothered to report the affair) and you actually have a well-deserved ban, where the Indian government has quite evidently failed to maintain standards despite multiple warnings going back to 2010.

You would have thought, therefore, that this was a golden opportunity for the Independent to extol the virtues of the "Europe" it so much loves, instead of running with the hounds, effectively siding with the (ill-informed) critics of the ban.

This makes the most interesting piece, the report in The Hindu, which tells us: "India not to drag EU to WTO over mango ban". Such a response is eminently predictable, as the EU was working within the framework of the UN-mandated IPPC code, and fully compliant with international law. India won't go to the WTO because it wouldn't have a hope of getting a favourable ruling.

The Indian authorities have been given plenty of warning on this and, with evidence of deteriorating standards, the EU has acted perfectly properly. It is now up to the Indian government to sort out its act - which it is manifestly failing to do.

As regards Indian food exports to EU member states, the sub-continent is the worst offender on the "Rapid Alerts" system, not only for pest infestation problems, but for high levels of pesticide residues, aflatoxins (no 1 in the top ten of notifications), Salmonella spp in spices, B. cereus and other problems.

The Indian government has quite clearly an endemic problem and is not taking its responsibilities seriously. This type of intervention is helpful, and it provides a warning shot and helps strengthen the arm of the responsible officials, to improve standards. If it is not meeting EU/UK standards, then it will be losing trade elsewhere.

There is another point here as well. For British importers, when faults reach a certain level, a ban is a cheaper option. Otherwise, interceptions are made on a case-by-case basis at the docks, by Port Health Inspectors.

Nor can it be said that the EU is out on its own. Local Indian media is pointing out that enforcing domestic food safety standards is an "often neglected" issue. Even the New Indian Express is acknowledging the need for India, "to make concerted efforts to raise the quality of its goods, mainly food". It opines: "If we adhere to high standards, we will not be giving room for western nations to cry foul".

If the Indian authorities can't even maintain their own local standards, there is no case for us putting our own people and our agriculture at risk. After all, the likes of the Independent would be first into the fray if we had a food poisoning outbreak, or an exotic plant disease ripping through the country.

The ultimate irony, though, is that it is a thoroughly eurosceptic Secretary of State, Owen Paterson, who is enforcing the ban, while the Europhile media is whingeing about the action. It is going to be interesting to see whether the "eurosceptics" also pick this up and start whingeing as well.