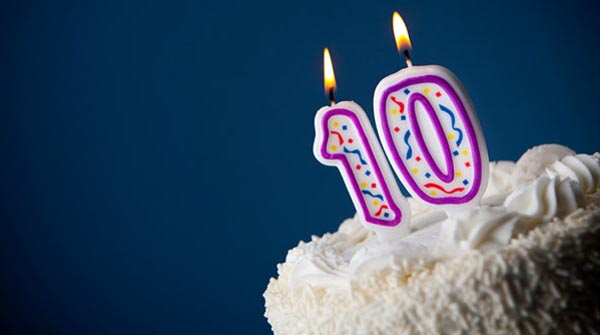 Sneaking by unnoticed last week was the tenth anniversary of this blog, which Helen Szamuely and I set up on 22 April 2004. In it, we confidently asserted, "we hope to rehearse and discuss the issues relating to one of the most important political issues of the day - the UK referendum on the EU's constitutional treaty".

Ten years, 15,000 posts and 17 million hits later, and we are still waiting for a referendum, with this blog still battling away in anticipation of that event. Oddly enough, just as we launched, we were in the run-up to a euro-election and while the contemporary media are currently picking holes in the UKIP posters, then we were pointing out how the Conservatives had mistakenly used a picture of American fishing boats on their manifesto to illustrate the depredations of the CFP.

Back then, there was a certain buzz about blogging, with a feeling that we were the "new media" that was going to storm the ramparts of the dead-tree media, but that was before the blogosphere fragmented and the march of the "clogs" sucked the vitality out the genre, readers and writers migrating to facebook and twitter.

Nonetheless, the independent political blogs do survive, a small outpost of sanity, we think, in and increasingly vacuous media environment, where personality politics and trivia dominate the web. And even now, in a fit of wild optimism, Peter and I are working on building a new blog, dedicated not to a referendum campaign, but to the mechanics of leaving the EU.

This won't be the first time we've had a spin-off blog. We ran the highly influential Defence of the Realm blog, at its most active from 2006-2009, and we also ran a commemorative blog Days of Glory, to celebrate the Battle of Britain. Both these blogs went on to spawn their own books, the Ministry of Defeat and The Many not the Few - each ignored by the national media.

Now, of course, we also have The Harrogate Agenda, which also has its own pamphlet and a very brief mention in the Telegraph today.

Ten years, therefore, have been a somewhat eventful period, including a spell at the menders, to have a part replaced. That gives us a twenty-five year warranty – quite enough to keep EU Ref going for at least another ten years, when we hope variously to inform and entertain our readers, and piss off our detractors with equal verve.