Global governance: EU getting too big for its boots 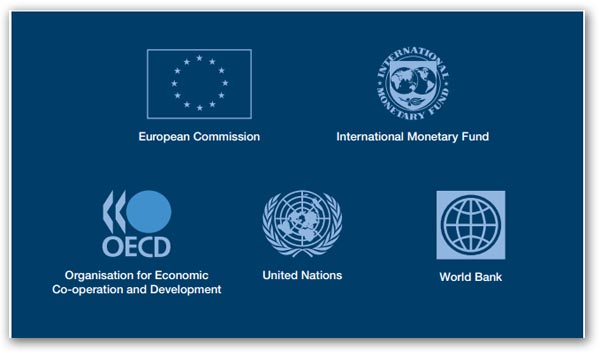 Statistical data on the economy are the meat and drinks of politics. They are tools by which the real economy is described, the performance of which can make or break a political party and decide whether it wins an election.
We can see their importance in this piece in the Guardian. It carries an ONS analysis on the nature of Britain's economy and how it compares with other G7 countries.

From this analysis, we learn that Britain's economic recovery appears to be well under way but, with growth apparently secured and the outlook bright, a good news story that will do Chancellor Osborne little harm.

However, according to the Financial Times, the picture is to get even better in September when the UK "adopts the new international standards for national income accounting".

Then, we are told, three almost universally held "truths" about Britain's economy will wither or die. These are that: households do not save, companies sit on huge piles of cash and household incomes have stopped rising in line with GDP.

In future, instead of counting the money employers put into their pension funds as household income, the figures will reflect the contractual promises companies have made. With UK final salary pensions heavily underfunded, the promises are much bigger than the contributions already made so household income will rise and corporate and local authority incomes will fall.

Then, under the new scheme, the level of UK gross domestic product will rise because statisticians will count research and development, the manufacture of weapons systems and some other intangibles as investment in future prosperity rather than a current cost to business.

Standing back from this, it is obvious that anyone who has the power to redefine the statistics gathering in such a way has considerable power and, from the context of the FT, it is very clear that the UK government is not in charge. These are "international standards".

Needless to say, though, the newspaper is a little reticent in identifying these "international standards", or the identity of the gifted statisticians responsible for the changes – and it takes more than a little bit of digging to find out.

The first tangible clue I found came from a blog run by the US Department of commerce Bureau of Economic Analysis which does pin down the source. It is the United Nations' System of National Accounts (SNA). So, once again, we are hitting the buffers of global governance, the hidden hand which is deciding on our destinies.

Do not, though, run away with the idea that the UN is on its own on this. The actual system is prepared under the auspices of the "Inter-Secretariat Working Group on National Accounts" which comprises five separate organisations, only one of which is the UN.

The other four are the World Bank, the Organisation for Economic Co-operation and Development (OECD), the International Monetary Fund (IMF) and the European Commission, represented by Eurostat, which has set out its stall here.

And there is your "top table", the hidden hand of global governance, where the "big five" call the shots. Why the EU should have such a prominent position is intriguing. We can see why the UK is not there, but the biggest economy in the world, the United States, is not at there either.

Thus, while supporters of EU membership might argue that, in order to have some access to the "top table", the UK like the US is also a member of the other organisations, through which we can make our views known.

What is disturbing, though, is that the EU is on the working group at all. It is not a financial institute like the others co-optees. An explanation, though, might be the huge flow of funds from EU coffers to support UN projects. In the six years from 2007 to 2012, around €1.09bn of our money was paid over to the UN institutions or partners. This doubtless gives the EU some considerable clout.

What we are seeing, though, is far too close a relationship between the EU and the UN. The EU makes no bones about the importance of the SNA. It is designed, it says, for the purpose of economic analysis, decision-taking and policy-making. In these corridors of power, the EU shouldn't be there at all.

It is getting too big for its boots.