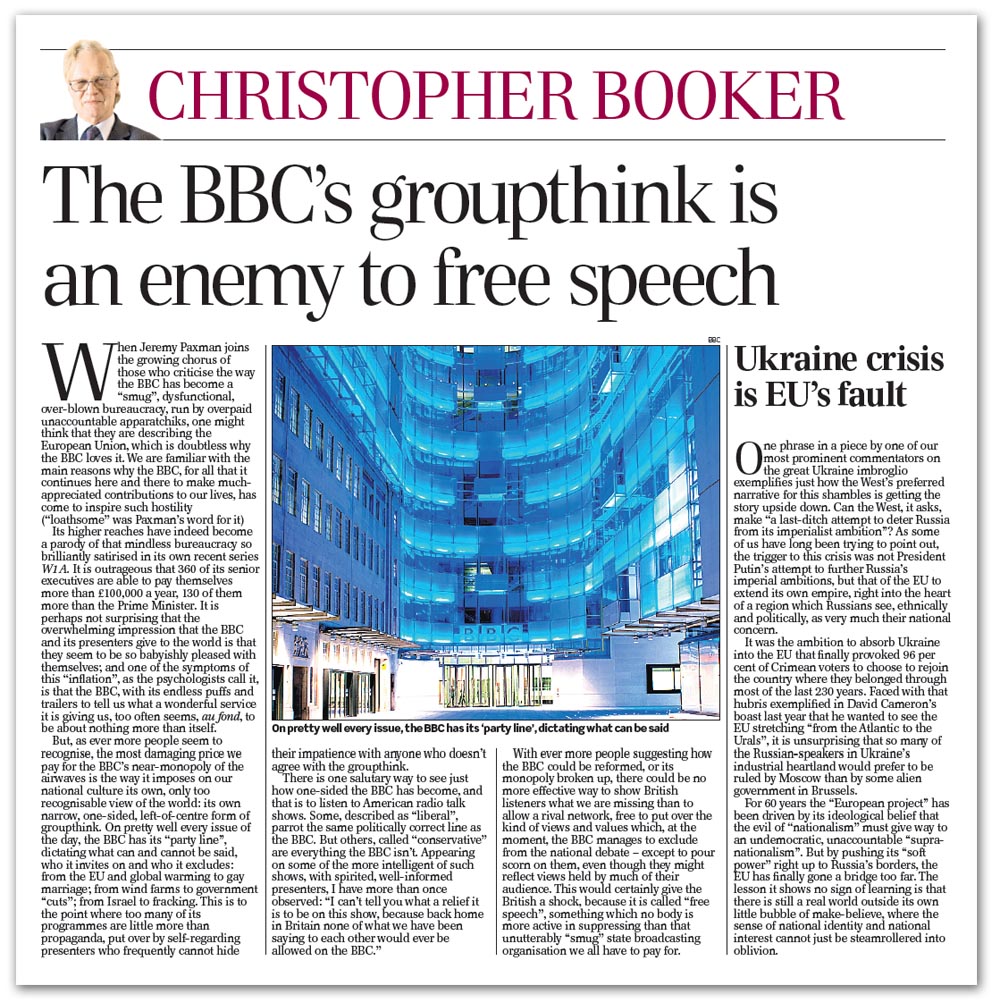 In emphasis only, there is an element of disagreement here, between Booker and I. Having stopped listening or watching BBC output many years ago, except for very special reasons, I don't have a view on what the BBC does say.
But, from reviewing the internet pages, I am as much concerned by what it doesn't say, as does. Personally, right across the board, I regard censorship by omission as the biggest defect in the legacy media. However, taking just what the BBC does publish, I would not even begin to disagree with Booker's general line that, on pretty well every issue, it has its "party line", shaping what is said.

Booker calls in aid Jeremy Paxman, a man so loathsome I can't bear to watch him. When he joins the growing chorus of those who criticise the way the BBC has become a "smug", dysfunctional, over-blown bureaucracy, run by overpaid unaccountable apparatchiks, one might think that they are describing the EU, Booker observes. You might also think that the EU's similarities in corporate culture might be why the BBC loves it.

Nevertheless, we are familiar with the main reasons why the BBC, for all that it continues here and there to make much-appreciated contributions to our lives, has come to inspire such hostility ("loathsome" was the loathsome Paxman's word for it).

Its higher reaches have indeed become a parody of that mindless bureaucracy so brilliantly satirised in its own recent series W1A. It is outrageous that 360 of its senior executives are able to pay themselves more than Ł100,000 a year, 130 of them more than the Prime Minister.

It is perhaps not surprising that the overwhelming impression that the BBC and its presenters give to the world is that they seem to be so babyishly pleased with themselves. And one of the symptoms of this "inflation", as the psychologists call it, is that the BBC, with its endless puffs and trailers to tell us what a wonderful service it is giving us, too often seems, au fond, to be about nothing more than itself.

But, as ever more people seem to recognise, the most damaging price we pay for the BBC's near-monopoly of the airwaves is the way it imposes on our national culture its own, only too recognisable view of the world: its own narrow, one-sided, left-of-centre form of groupthink.

On pretty well every issue of the day, the BBC has its "party line", dictating what can and cannot be said, who it invites on and who it excludes: from the EU and global warming to gay marriage; from wind farms to government "cuts"; from Israel to fracking.

This is to the point where too many of its programmes are little more than propaganda, put over by self-regarding presenters who frequently cannot hide their impatience with anyone who doesn't agree with the groupthink.

There is one salutary way to see just how one-sided the BBC has become, and that is to listen to American radio talk shows. Some, described as "liberal", parrot the same politically correct line as the BBC. But others, called "conservative" are everything the BBC isn't.

Appearing on some of the more intelligent of such shows, with spirited, well-informed presenters, I have more than once observed: "I can't tell you what a relief it is to be on this show, because back home in Britain none of what we have been saying to each other would ever be allowed on the BBC".

With ever more people suggesting how the BBC could be reformed, or its monopoly broken up, there could be no more effective way to show British listeners what we are missing than to allow a rival network, free to put over alternative views.

What we would want are the kind of views and values which, at the moment, the BBC manages to exclude from the national debate, except to pour scorn on them, even though they might reflect views held by much of their audience.

This would certainly give the British a shock, because it is called "free speech", something which no body is more active in suppressing than that unutterably "smug" state broadcasting organisation we all have to pay for, Booker concludes.
Speaking personally, it would be nice to think that competition would help. But so degraded has the media become that even a total free-for-all might not deliver much improvement. Despite that, though, it would be so nice to see the BBC utterly destroyed, so much so that I would prefer even for Portland Place to be turned into a bombsite, for use as a TV/film set.
At least then it would be doing something useful.