UKIP: The Times's Ode to Farage 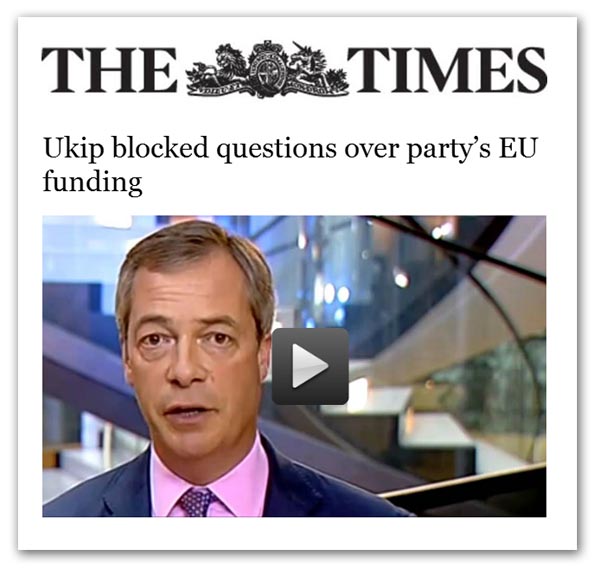 Totally unmoved by the squealing of the Farage Party in response to yesterday's attack, The Times was back in action again earlier today, with yet another front page attack piece on the nation's favourite protest party.

Before getting stuck into the details (which we will have to, because the paywall precludes most people seeing the detail for themselves), one has to look at the bigger picture. And here, one must observe that what goes on the front page as the lead story is a top-line editorial decision. For this to happen twice in succession is a studied decision. Such things do not happen by accident.

When, as we saw with yesterday's story (although less so today) content was thin, and the target a minor political figure, leader of a "populist" political party, this is not normal news reporting. There is an agenda at play. And it was to that which I was alluding yesterday, a point lost on some of my regular ex-readers, who see any reference to Farage on this blog as yet more evidence of North's rabid hatred of him, for grounds which are quite irrational.

Part of what is happening here, it seems, is a determination to bring Farage down. And, little do UKIP members know it (or begin to agree), but the best thing that could happen to their party is for the paper to succeed.  It it doesn't, then Farage will bring the Party down.

To an extent, the piece of the day does make it clear, that the paper in gunning for Farage, headed as it was, "UKIP blocked questions over party's EU funding". In so doing, it tells a familiar (to us) tale of how "members were silenced, ignored or forced out of the party after questioning its use of EU allowances and donations". Farage and other senior UKIP officials, it appears, "traduced colleagues who raised concerns about how the party handled millions of pounds in funds".

This, of course, we didn't need The Times to tell us. Again and again, we've been pointing out all manner of things amiss in UKIP but, in the manner of people who simply don't want to know, the members attack the messenger rather than the message. Even my repeating charges made by others is treated as evidence of my "rabid hatred".
Nevertheless, for those who will allow themselves to be informed, we hear that Mr Farage called a senior female UKIP official a "stupid woman" and told her to "shut up" when she asked for an independent audit into party finances. This was according to Delroy Young, once UKIP's only black executive. However, he is not the most sympathetic of persons, which has allowed UKIP official to trash his character, as indeed they have attempted to do with mine.

We also learn that another member was "allegedly physically threatened", which is entirely in character for Farage. Those who have been close to him know full well that he is a vicious, vindictive bully, who will stop at nothing to get his way.

But now we have still more that UKIP members can ignore, and put down to "smears", as they close their minds to the true nature of their leader, preferring instead the image he presents to the world.

Never mind that six former party officials have alleged that Mr Farage presided over a party that reacted furiously to any questioning of its financial affairs. After leaving UKIP in 2008, Delroy Young claimed that he received a telephone death threat, allegedly on the orders of a senior UKIP party executive. At the time, UKIP denied that anyone in the party ordered the threat – as indeed you would expect.

Young has told The Times that Mr Farage had a habit of going "berserk" whenever anyone asks questions about money. And that he goes "berserk" I know to be true. I've seen this with my own eyes, and it is not a pretty sight. But that is the dark side of Farage that he keeps well-hidden from the public and gushing girlie reporters.

Says Young, in 2006 he joined five other UKIP national executive committee (NEC) members to call for "an immediate internal audit of the party finances by members of the NEC with full disclosure".The NEC members were reacting to concerns over the use of MEP allowances as well as to questions about donations raised through a UKIP call centre in Kent. Mr Farage has said that the Ashford call centre raised at least Ł400,000 over three years.

That money subsequently went "missing" and despite strenuous attempts to trace its whereabouts, the fate of the Ashford money remains a mystery - and any inquiries about it are met with hostility and the most violent of reactions.

At a UKIP meeting in Bromley, a female committee member attempted to ask Mr Farage about the Ashford and MEPs' expenses. It was then that Farage is said to have shouted at her, "Shut up you stupid woman". Young, who was at the meeting, said. "He went berserk".

Ian Gillman, a former member of UKIP's NEC, said that he had also raised questions about what happened to the Ashford money, as well as about funds raised through the sale of lottery tickets. Gillman described a meeting of the party's East Midlands committee in March 2008 at which he highlighted his concerns. for his trouble, he was "physically threatened" by a party official in the presence of Derek Clark MEP.

"I never raised my voice, I just persisted with question after question about where our money had gone", says Gillman. "The official made threats to take me outside the room and beat me up. He darted a ballpoint pen at my eye [and] said how dare you ask these questions". Gillman says that he was asked to leave the meeting and thrown off the committee. And in what is an entirely typical response, he was subsequently targeted with a spam email attack by the same party official.

Needless to say, a UKIP official disputes Gillman's account. On behalf of their master, currently employed UKIP officials always do – until they too sicken and, weary of the lies, break away to join the growing ranks of the "whistleblowers". Then the UKIP spin machine moves into action, dripping its vitriol, lies and smears.

Yet Tony Ellwood, who worked as Clark's political researcher for several years, was also present at the meeting and corroborates Gillman's account. Ellwood said that in 2006 he was asked to reconcile the national party's accounts and found that 95 percent of its funds were being withdrawn as cash for unknown purposes.

He said that he had "kept quiet" in order to keep his job, but after witnessing the way Gillman had been treated, he confronted Mr Clark about alleged financial irregularities. Ellwood said the MEP "lost his temper" and told him to resign.

And that's the way UKIP works. You either close ranks and worship the leader, or you're out. There's no messing, and no halfway house. And once you have been removed, by whatever means,  the "briefings" start. And there are plenty of the faithful prepared to believe the slanderous murmurings, repeating them uncritically at every opportunity. I should know - I've been on the receiving end of this treatment for over a decade.

The Times, though, is immune to the blandishment of the UKIP faithful. Their journalists have seen a letter from Bruce Lawson, a former national treasurer, to Farage in 2008 urging him to resign as UKIP's leader. Lawson, who suggested that Farage remain as the party's top MEP in Brussels, said he was "wholly uncomfortable" with how UKIP MEPs received allowances and "where those monies go".

Lawson sent Farage an attached document called: "MEPs' Pay and Expenses — Who wants to be a Millionaire", noting that, "MEPs [get] an office allowance of about Ł30,000. No receipts are required".

In this document, he added: "Some MEPs use it to pay an extra Ł660 a month into their pension plans from their office expenses money. In theory they are then supposed to reimburse this money from their salaries, but everyone relies on the MEPs' honesty. There are no checks that any of them actually do repay this money".

As is customary in newspaper pieces, a UKIP spokesman was asked for a comment, and responded: "These historic allegations come from a few very unimpressive people that UKIP attracted years ago and who were gradually weeded out".

That is both characteristic and indicative of a UKIP response, attacking the accusers rather than dealing with what they have to say. But amongst those "historic allegations" is the charge that over Ł400,000 of members' money went missing and, to this day, has not been properly (or at all) accounted for.

But, if you are on the inside, you complain about its activities, and of Farage, at your peril. And, from the outside, you become one of those "unimpressive people that UKIP attracted years ago and who were gradually weeded out".

This "unimpressive person", however, is unimpressed. And so is The Times, read by hundreds of thousands of people. The faithful may stick their fingers in their ears and close their eyes, singing "Ode to Farage" at the tops of their voices, but the fact is that TGL's days are numbered. This is only the start.