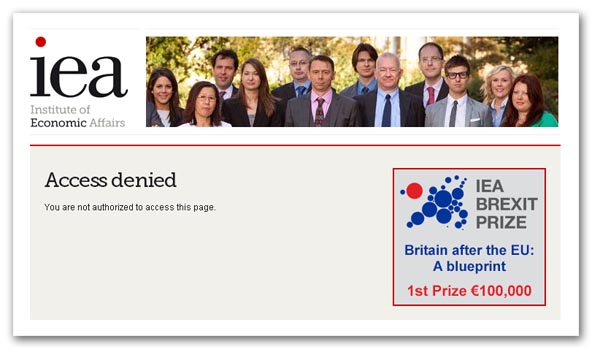 We were told that, to coincide with the announcement of the IEA's "Brexit" winner at 8pm yesterday evening, the winning entry would be available on the IEA website. In view of David Myddelton's senior moment, though, I remarked that this would only be as long as they pressed the right button.
However, well after half-an-hour after the announcement, a link to the paper still had not appeared. One wondered whether they were so ashamed of the paper (or themselves) that they didn't dare publish it. Even their press release seemed to have gone astray.
With the incompetence for which this think tank has become justly famous, the link originally provided gave us an "access denied" (above). However, when the link finally came live, we begin to see why the IEA was so reluctant to publish the full version. We did not expect very much from the IEA, but this was far worse then even we expected.

We had our very grave suspicions that the judges had not fully read our paper, but we are now wondering whether the judges read this one at all.

Working from the press release, we saw that the paper was by Iain Mansfield, a 30 year old member of the diplomatic service based at the British embassy in Manila. It is a poorly-constructed mixture of low-grade wishful thinking, political naivety, and practical minefields that it in no way resembles a workable or even half-way intelligent plan. To say it was "lightweight" would be paying the author a compliment. If the judges did actually select this as the winner, then they need to be deeply, deeply ashamed of themselves.

It took a further hour, however, for the "plan" at last became available on the wesbsite. Now the whole world can see the ghastly thing in all its tawdry detail.

Inevitably, I'm going to be comparing this with my own work – which is exactly what the judges should have been doing. This was a competition, after all, where different writers were pitting themselves against each other. I am not thus an impartial judge, but readers can look at both papers themselves and form their own judgements.
Nevertheless, it is entirely valid for me to compare the relative merits of the two entries - the only two to which I have access. So, starting at the beginning, we have in the winner a document which is about half the length of mine (the text actually less than 9,500 words, excluding text boxes). It has less than half the number of references, and poor quality graphics, most of which don't even look original.

Let us also recall that the judges told us that our entry was "good" and our arguments "intriguing". But, they said that, due to the "extremely high quality of some of the entries" the IEA was not progressing our entry to the final six.

With that, we need to start comparing the detail.  I'll only make a start in this post, looking at where Mansfield argues, of the Article 50 negotiations, that the government should "observe the two-year period and not negotiate for an earlier or later date".
Here, Mansfield's argument is entirely fair and sensible: we argue much the same. We do not believe it is politically sustainable for the government to conduct prolonged Article 50 negotiations as there will be enormous pressure for an early conclusion. Thus, we argue, the negotiations will be dominated by the need to conclude them speedily.
With that in mind, however, we then go to great lengths to show that this dominating need has a major and unavoidable impact on the nature of the exit agreement. To that effect, we provide evidence which shows that negotiating bilateral free trade agreements with the EU is a complex and lengthy process. The current round of EU-Swiss talks, for instance, started in 1994 and took 16 years to get to the current state. It would, therefore, be extremely optimistic to expect a de novo bilateral deal to be concluded within five years.

Thus, we argue that the bilateral agreement route is not open to the UK within the framework of the Article 50 negotiations. The only way we believe that UK negotiators could get inside the time frame is to take an off-the-shelf deal, and agree it unchanged – the whole deal on an all-or-nothing basis. And this is why we recommend the EEA option – not because it is ideal, but because it is the only realistic option, attainable in the time.

Mansfield, however, rejects the idea of joining the EEA, although he does suggest we join EFTA. As an aside, does he explore the views of EFTA members, as to whether they would accept the UK? He doesn't, but we did.

I actually went to Norway, and to Iceland. The Norwegians and Icelanders both, wanted us in EFTA and the EEA, because we could help them renegotiate the deal. Would they want us in EFTA without the EEA? I very much doubt it – but this is something Mansfield doesn't even explore. And the judges let him get away with it.

Howsoever, what Mansfield advocates is a pick'n mix bilateral agreement, adopting a position "somewhere between that of Turkey's and Switzerland's membership of EFTA". This is not only politically unattainable in the timescale, it is incoherent.

And, having talked so some of the other competitors last night, I know that we were not the only entrants to point out the impossibility of attaining an ab initio bilateral deal within the two years.

The judges are, of course, entitled to disagree with our views, but they are not entitled to ignore our evidence in favour of an assertion that has no evidential support, and then claim that the latter submission is better than the former, especially when Mansfield did not offer any serious discussion as to the feasibility of attaining a bilateral deal within the time frame he sets. This is simply not playing straight.

Yet, as we remind ourselves again, our submission - according to the judges - was "good". By inference, though, Mansfield's work was "extremely high quality". This is simply not a tenable statement, and one which will become even less tenable as we delve into this work.. We will assert that the judges have misled themselves, and done us all a grave disservice.

With that, we'll call it a day. We'll pick up the threads again later, when we will look at some of the other nonsense assertions made by Mansfield, and accepted by the judges.