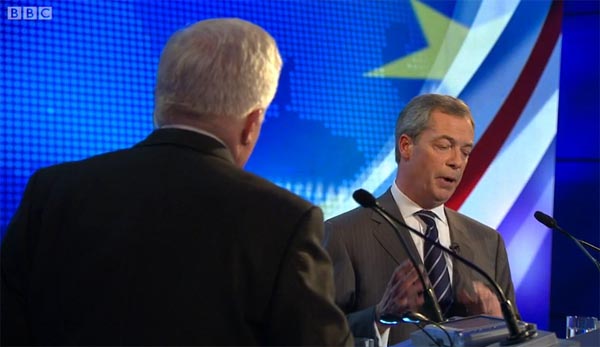 Following on from the Clegg-Farage debate, I promised I would return to the Norway "fax diplomacy" segment, once I had seen the recording. That I have done, and append a transcript below. However, before exploring the exchange, we need to review the crucial issue of global governance, and the growth of international regulation, in order then to put the debate in context.

It was in October 2008 that I first wrote a substantive piece about global governance (although I was writing about it as early as 2004), and I have been writing about its progress on and off ever since, learning a great deal in the process.

What in particular I have been noticing is a significant growth of international regulation, formulated at global level under the aegis of the WTO and the UN. They are then handed down to regional and sub-regional bodies such as the EU, and through them to their members. Individual member countries, which are not part of any specific trading groups, deal direct.

Such has been the phenomenon that I have been reporting that the bulk of trading law affecting us in this country, coming to us via the EU, does not in fact originate with the EU. It is coming from a plethora of global bodies.

Until fairly recently, though, I had not fully (or at all) understood why this was happening. In fact, that it was only when I was researching for my Flexcit plan that I stumbled on what is most certainly the reason why we are seeing the progressive globalisation of trading regulation.

That cause is the WTO's Agreement on Technical Barriers to Trade which came into force in 1995 and, after a slow start, is gradually taking effect. The full text is here but the particular point of interest is Article 2.

The first part of this Article requires that, in respect of technical regulations, products imported from the territory of any WTO member "shall be accorded treatment no less favourable than that accorded to like products of national origin and to like products originating in any other country". 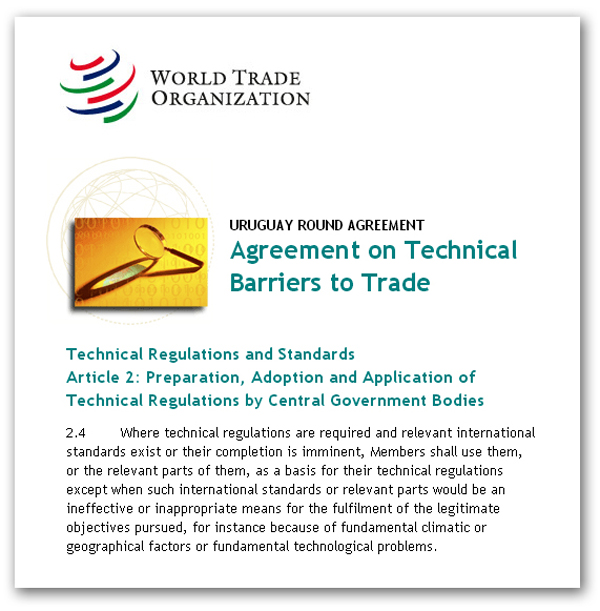 Essentially, this is the template for globalisation and in my Flexcit plan, I wrote that this was, effectively, the redundancy notice for the EU's Single Market.

The point about the Single Market, of course, is that it is a collection of regulation, driving the harmonisation of standards, with a view to facilitating trade throughout the Communities. That acquis is also used as the basis of the EEA agreement, and other agreements, such as that on offer to the Eastern Partnership, and the Turkish customs union.

As such, as the acquis is gradually replaced by international regulation, it loses its distinctiveness, and simply becomes a property shared by all members of the WTO, which they will all use as the basis for international trade. The EU's Single Market thus becomes redundant, replaced by the globalised market.

Now, the thing that becomes important, and has particular relevance to Wednesday's debate is the way this new global acquis is being constructed.

As it stands, as long as we are in the EU, we have a subordinate position, and the agreements on international standards are negotiated and approved by the EU. EFTA/EEA countries, however, are able to negotiate for themselves and, only after they have agreed them are they then processed into actionable law (with the core unchanged) and passed to the originating countries. I have produced a flow chart (below) which illustrates how the process works.

This then is the "fax diplomacy" to which Nick Clegg referred to in the debate, in the following passage, starting 38 minutes and 48 seconds into the programme:

NC: I tell you what I don't believe in. I don't believe in the dishonest in saying to the British people that you can turn the clock back. What next? Are you going to say we should return to the gold standard, or maybe get WG Grace to open the batting for England again? This is the 21st Century, it's not the 19th Century.

Now Nigel Farage, I've heard this many, many times, and you'll hear it this evening, says that we should be like Switzerland or Norway. Let's just think about that for a minute. Switzerland and Norway have to pay into the European Union coffers. They have to obey all European Union laws. That's why they call it "fax democracy" in Norway: everything gets decided by everybody else in Brussels. They then have to transpose it into law in Oslo. They have no British MEPs, they have no Norwegian of Swiss MEPs or Commissioners, they have no passport checks, no power whatsoever, all the rules are made by foreigners – utter powerlessness. That is how perverse the patriotism of Nigel Farage has become that he now advocates that we become like two countries that have less power than we do in the world's largest economy.

This is two seconds short of a minute, giving Farage plenty of time to respond. And with the goal mouth wide open, on 39 minutes and 46 seconds, he misses the point completely, and kicks the ball into touch:

NF: Nick, Nick, Nick, you talk about modernity. You are advocating continued membership of a customs union. It is the only customs union of any size that exists in the whole world. It is a 19th Century concept based on building a club and protecting yourself against the rest of the world. It is not fit for purpose in the 21st Century and that's why people with real experience with economics, from a standpoint of total independence like Nigel Lawson, say we now need to get rid of this outdated model and move into the modern world. The European model is outdated, crumbling and failing. We deserve something much better than that …

This takes some forty second, at which point David Dimbleby recognises that Farage has missed the point, and puts the question to him again, handing him the opportunity on a plate to demolish Clegg's "fax diplomacy" claim. Thus does Dimbleby, on 40 minutes 26 seconds, ask:

In the aftermath of the debate, we actually offered an optimal response, repeated here below:

Norway and Iceland have consultative arrangements and vetoes. That is more than our measly eight percent of the vote in the Council of Ministers. And with globalisation, most trading laws affecting the EU are made globally. At that level, the UK is excluded while Norway and Iceland are fully represented - they have more influence than the UK. Out of the EU, we would return to the global "top tables". We would then have more power not less.

Taking 30 seconds or less, this would have easily deliverable, but instead of something like this, Farage kicked the ball into touch again. In a fractured sequence from 40 minutes 44 seconds to 41 minutes 33 seconds, he comes us with this:

NF: Well Mexico has a trade deal with the European Union and if Mexico sells …

NF (41:07): Well that's up to them. And the Swiss recently voted of course to potentially change that or end that …

DD (41:12): Norwegians have freedom of movement. Is that correct?

NF ( 41:14): If we sell goods to North America, we have to conform to the standards of North America without having a direct say over the regulations in North America. Wherever you trade in the world, you know, if we sell motor cars to America they have to be with the steering wheels on the other side. That's just the way that it is. What people who buy and sell products do is they adapt. It's called business.

The total time of the whole sequence is 2 minutes 45 seconds, with the larger part of the time going to Farage. He had every opportunity to explain, and was actively encouraged to do so.

By any measure, Farage's response was confused and lame. There are those who would say that he should not pursue arcane detail, but when it comes to it, what is more arcane than a discussion about customs unions? Yet that was what Farage chose to discuss, failing completely to address the "fax diplomacy" issue. He needed to say Norway, Iceland and even Lichtenstein had more power over EU regulation than the UK, and he did not.

Whichever way you cut it, Farage failed to step up to the plate. We need better from him and, given the amount of money we pay him, he really is going to have to up his game.