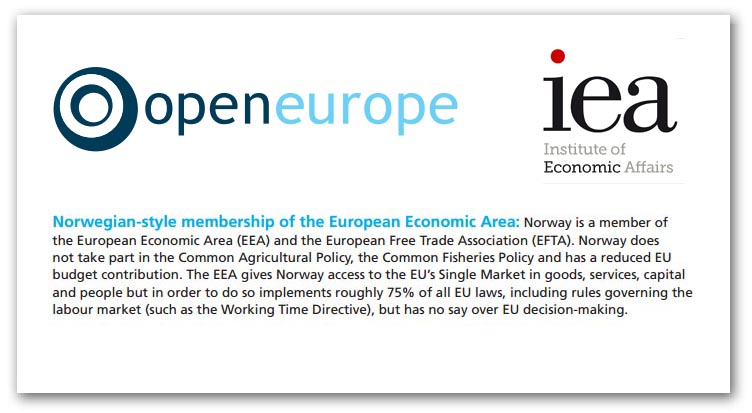 From the press office of Open Europe yesterday, bolstered by a Mats Persson blog today comes a brazen attempt to assert control over the "Brexit" agenda, with a tendentious evaluation of how Article 50 cannot work, leading to a predictable call for EU reform.

Having now opened a Berlin office, it does seem that the organisation is learning from a previous denizen of the city, offering a Goebbels-like claim that it is an "independent think tank" which is "seeking to contribute new thinking to the debate about the direction of the European Union …".

Yet, it far from being independent, Open Europe is a front for the "EU reform" wing of the Conservative Party. And, rather than "seeking to contribute new thinking to the debate", it is seeking to close down the "Brexit" debate and concentrate attention on the EU reform. It is not a think tank. It is a propaganda operation.

So desperate is the Goebbels Institute to stake its claim that it has issued a 24-page booklet purporting to be the "real Brexit debate". This reports on its fatuous "war games" last December in which it managed a bizarre simulation of Article 50 negotiations, devised to produce a messy failure and thus demonstrate that reform was the better option.

So weak was the argument that the Goebbels Institute finds it necessary to distort the exit options, maintaining its classic stance that if the UK adopted the "Norway Option", it would have "no say over EU decision-making".

This has been addressed so many times, that even Open Europe director Mats Persson can't pretend he doesn't know it is a lie, but still the Muppets continue with it. They have little alternative because they know that, if they acknowledge the truth, their game is over, Their vision of reform is bankrupt.

Thus the Muppets contrived a simulation which had pretend "colleagues" expressing concern that allowing the UK to join the EEA would establish a dangerous precedent. They were wary of allowing member states to "cherry pick" access to the single market without actually being an EU member. Not a word was said about the "colleagues" offering precisely that to Ukraine and the rest of the "Eastern Partnership".

Keen on what they call a "reality check", the presumptuous Muppets then tell us that the EEA "was designed as an improvised measure for governments seeking closer integration with the EU, but whose electorates had rejected full membership".

This gives them another opportunity to inject a dose of poison, concluding with the a scary tale of a dismal future. This is the one where the UK has to accept "many of the existing tenets of EU membership", and expensive EU law, "with no way of influencing it". The net effect, goes the narrative, "would be less opportunity to hold Brussels to account, not more".

Underpinning the Goebbels Institute are analyses of several different exit options, but they contrive to offer just sufficient detail to make their evaluations look plausible, but the options never quite manage to be workable. They cannot be allowed to provide a better alternative to their preferred option of reform.

Article 50, the Muppets then tell us, is a one way street. Once triggered, there is no going back, they say – as if that was a disadvantage. This, they actually say, "it is likely to put the UK on the back foot in any negotiation", then whingeing that the UK will not take part in the final qualified majority vote on whether to accept the new deal, sounding for all the world like and out-take from a Gerald Batten video.

But, having stacked the decks against "Brexit", they then come to the stunning conclusion that Article 50 is "best kept as an implicit threat, as in practice it cedes more control than it provides. However, "any leader negotiating new membership terms must clearly be ready to trigger it".

So that's the Open Europe game plan: EU reform of an unspecified nature, backed up by a threat, implicit or actual, that if the "colleagues" don't do exactly what we want, we threaten them with Article 50 – without actually using it, of course, because it doesn't work anyway.

In offering this scenario, we are of course seeing a fundamental failure of imagination and nerve. Open Europe is staffed and supported by timorous wee beasties who haven't the wit to devise a proper exit plan. Instead, confronted with the inherent impossibility of achieving meaningful EU "reform",  they have to rig the debate in order to offer anything that looks even remotely workable.

Oddly enough, in this endeavour, they claim as a registered supporter, one Martin Ricketts. By pure coincidence, Ricketts is also a Managing Trustee and Chairman of the Academic Advisory Council of the Institute of Economic Affairs (IEA), and a member of the judging panel for the IEA's "Brexit prize". In another of life's wondrous coincidences, so is Roger Bootle an IEA judge and a registered Open Europe supporter.

In yet another complete coincidence, the IEA now looks set to award the "Brexit" prize to an option straight out of the Open Europe play book – one that looks superficially plausible, but which cannot possibly work. Thus does the Open Europe/IEA propaganda nexus keep the faith.