UKIP: Farage has blown it 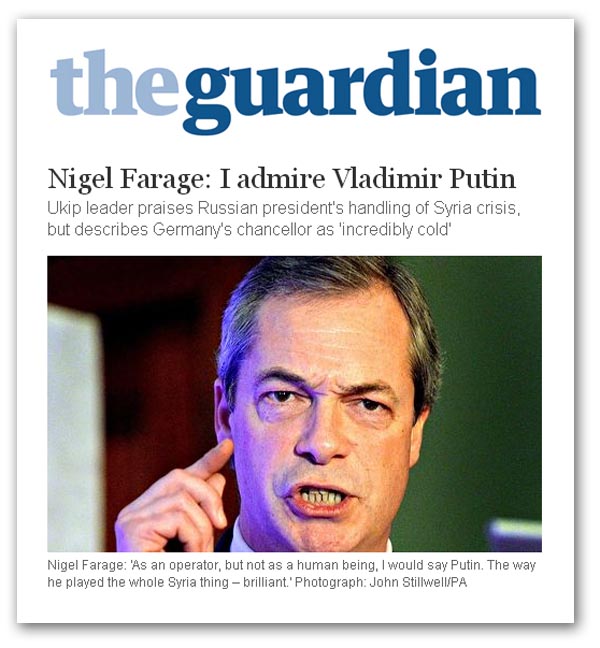 Whatever good he might have done himself and the cause with his "blood on its hands" comment on Ukraine, Farage has now completely destroyed with this comment, as retailed by the Guardian and the Independent, with the Telegraph, the Daily Mail and others piling in.

Questioned for GQ magazine by Labour's former director of communications Alistair Campbell, carrying out his first interview in his new role as the glossy monthly's "arch-interrogator", Farage was incautious enough to offer some laudatory comments on Putin, sufficient for them to be taken out of context and be used to fuel the Guardian headline.

Asked which current world leader he most admired, Farage replied: "As an operator, but not as a human being, I would say Putin. "The way he played the whole Syria thing. Brilliant. Not that I approve of him politically. How many journalists in jail now?"

The Independent thus leads its story with: "Nigel Farage has named Vladimir Putin as the world leader he most admires. He praised the Russian president's skills as an 'operator', citing his 'brilliant' handling of the civil war in Syria."
Here, we can't even say that Farage's diagnosis is correct.  During the height of the Syrian episode, Putin distinguished himself by his ruthless pursuit of the short-term national interest, from which there are lessons we can learn. But the Russian refusal to work towards an international solution has left us with a bitter and intractable civil war and a human tragedy of monstrous proportions, with the West having to pick up the tab. Under no circumstances could we thus describe Putin's handling of the crisis as "brilliant".

And, of course, as pointed out by Autonomous Mind, Farage has completely shattered the wholly appropriate case against the EU for its expansionist actions in eastern Europe. It will be very much harder to carry the argument about the malign role of the EU in Ukraine.

With Farage's praise on the table, the bleed-through is obvious. The point about the Ukraine issue is that one can criticise the role of the EU without endorsing the actions of Russia. The Russians have acted predictably but not well, and are quite evidently bullying their smaller neighbour. Thus, any politician attacking the EU has to be careful to distance himself from Russia or he will be cast as supporting Putin.

Heedless of this, with almost reckless abandon, Farage has walked into a trap, eyes wide closed, offering Clegg the perfect gift for this week's debate. He has given the deputy prime minister an ideal attack point, putting Farage on the defensive, and forcing him to explain his position. He will be able to cast the UKIP leader as supporting the leader of a repressive regime.

This recklessness, unfortunately, is typical of Farage, the cheeky-chappie, shooting from the hip and "telling it like it is". But as a leader of a political party with pretensions of power, he is coming under increasing scrutiny and is not rising to the challenge.
Mr Clegg and his team must be whooping with delight this morning, and Dimbleby will be positively orgasmic as he works out the wording of the question to plant with the audience, calculated to cause the maximum of embarrassment to The Great Leader, giving Clegg the perfect opening.

Making such unguarded comments, without regard for the consequences, thus will drag the UKIP leader down and damage the cause. They are uncalled for, and totally avoidable with a little care and forethought, characteristics for which Farage is not exactly well known.

In these "man-in-pub" comments, he has blown it – an unforced error which can do us nothing but harm. Farage has done some stupid things in his time but this is stupidity on stilts from a man who cannot be taken as a serious politician.