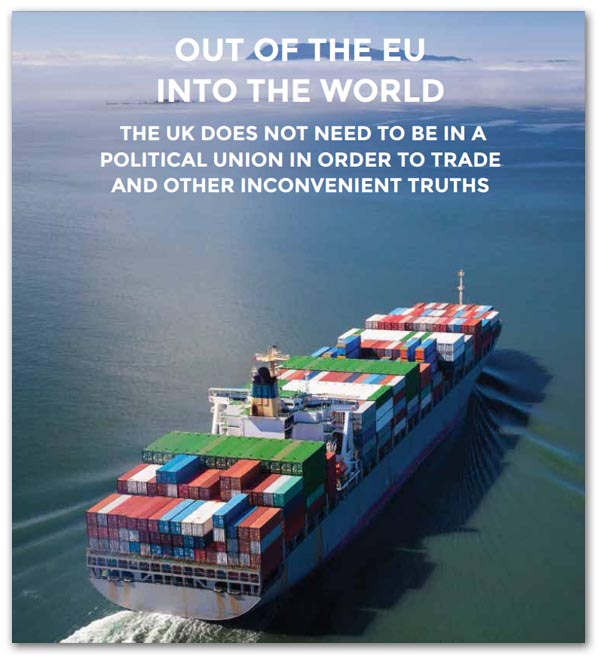 We had young Peter up for the weekend, so blogging was necessarily light. Then, with the muse having temporarily deserted, I spent an idle afternoon adding to the Booker column comments.

Saddened by the low grade of commentary, and also more than a little irritated by the "Vote UKIP" hijackers and the "lib-lab-con" mantra, I did a little winding up of my own, until I got bored with that too, and left the Muppets to it. The main action, however, was over on Janet Daly who, being kinder to The Great Leader than was Booker, attracted more attention from his love-struck acolytes.

Nevertheless, the work on the Booker thread at least yielded sight of a 96-page pamphlet produced by William Dartmouth, UKIP MEP for the South West, called Out of the EU, into the world, with the sub-title: "The UK does not need to be in a political union in order to trade - and other inconvenient truths".

The booklet looks attractive enough and is filled with factoids which will be of some use to people who can't be bothered to look them up for themselves. But it is incredibly light on political analysis, and most of what it produces isn't worth having.

On Norway and the EEA, for instance, we are told that it is "not correct to assert that Norway has no influence on EU regulations", which seems a good start. But Dartmouth then goes on to say:

Later, we are then told that, "Norway can influence EU regulations - by prompting debate and ensuring that the EU takes its interests into account. These are ways of influencing EU regulations aside from direct voting".

And that is it. That really is the best that William Dartmouth can offer, after five years in the European Parliament as his group coordinator on the international trade committee. Not a thing from, the Norway Option penetrates the consciousness of this dismal little man ñ and they wonder why I get increasingly impatient with the UKIP efforts.

But if this contribution is pathetic, Dartmouth slightly redeems himself by advocating that we invoke Article 50, but only slightly. He then spoils it all with this piece of sophistry, where he advocates what I call the "bilateral option":

Just how specious this is can be discerned from my Flexcit plan. There, I wrote that, following the "in-out" referendum, there will be a strong demand for the earliest possible exit from the EU.

I thus anticipated that the two years initially set by the Treaty for Article 50 negotiations would be treated as a maximum. Although the period could be extended by unanimous agreement, there would be little tolerance for prolonged talks and certainly not for a process that dragged on for many years.

My view was that expectations would undoubtedly create a political momentum that would be difficult to ignore, especially if a general election intervened. Dominating the talks, therefore, would be be an over-riding need to bring them to a speedy conclusion - within the two-year period.

Advocates for bilateral options, though, rarely discuss the time needed to conclude negotiations. Yet, although the relatively straightforward Greenland exit took two years to conclude, the current round of EU-Swiss talks started in 1994 and took 16 years.

Furthermore, the tendency is, with the progress of time, for the duration of negotiations to increase, as evidenced by the GATT/WTO rounds. The latest of these has taken more than ten years without reaching a conclusion.

With the EU, prolonged negotiations seem to be the norm. By way of example, preliminary talks on the Mexico-EU FTA started in 1995 and finished on 24 November 1999, the agreement coming into force on 1 July 2000.

The Colombia - Peru deal was launched in June 2007 and provisionally applied in the first trimester of 2013, nearly five years later. Its 2,605-page length, with 337 articles and dozens of schedules give clues as to the complexity of the task confronting negotiators. Work on the EU-Canadian Comprehensive Economic and Trade Agreement (CETA) started in June 2007 and it took until October 2013 for its key elements to be agreed.

Negotiations on the EU-South Korea FTA started in 2006 and the final agreement entered into force on 1 July 2011. However, this was only the last stage of a process which had started in 1993. To deliver the current 1,336-page trading agreement, alongside a broader-ranging 64-page framework agreement on political co-operation, took almost 18 years.

The EU-India free trade negotiations were launched in 2007 and have still to come to a conclusion seven years later. An agreement may not be signed until 2015.

Even more limited pacts can take many years. Negotiations for the Turkish readmission agreement ñ allowing for the return of illegal immigrants entering EU member state territories via Turkey ñ started in November 2002, but the agreement was not signed until 16 December 2013 ñ an interval of 11 years.

On this basis, it is highly improbable that British and EU negotiators could conclude a de novo bilateral agreement in less than five years, especially as there is much more than trade to deal with. Whatever their attractions in theory, the bilateral options are not viable, purely on the grounds of the time needed to negotiate them.

But this sort of thing completely by-passed Dartmouth. Even when you give these Muppets a free gift, as in the Norway Option, they don't take any notice of it. Yet, left to themselves they haven't a clue.

Often it has been suggested that we should go out of our way to help UKIP, even well-paid UKIP MEPs, taking home £182,826 in pay and expenses, while we work for nothing for the cause. But the sad truth is that even when you hand these people information on a plate, gratis, they are incapable of using it.

On the Article 50 negotiations, we actually flagged up the need for an interim solution in our open submission, creating space for a longer-term solution, which is why we advocate EFTA/EEA membership. It is not that this is an optimal solution, but by adopting an off-the-shelf agreement, we circumvent the need for prolonged negotiations prior to leaving the EU.

This is probably where the IEA judges have gone wrong, in failing to understand that, in real life, our negotiating options are extremely limited. But with William Dartmouth thinking we can negotiate a "tailor made" UK-EU trade agreement, without even considering the political realities of Article 50 negotiations and the pressure for an early completion, we have an MEP who is barely safe enough to let out on his own.