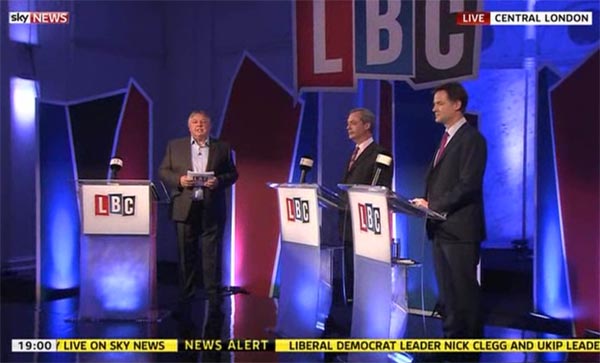 Possibly, the reason we have to suffer from the likes of Clegg prattling about his three million jobs "linked with Europe" is the total inability of the likes of Nigel Farage to put the issue to bed.

Of course, Clegg would have come back with "fax law" and loss of influence, but there is an easy counter to that, with the "Norway Option" and the fact that so much law comes from international organisations at global level.

Then Farage allowed himself to get bogged down on the argument about the percentage of law emanating from the EU. Clegg had one figure. Farage had others. But he could so easily have sidestepped the argument, and completely outflanked Clegg. All he had to do was state that most of the law was now coming from global institutions, where we were represented by the EU, as opposed to Norway which has seats at the "top tables".

Thus it was that he got bogged down in a never-ending circle, with the same points raised, repeating tired arguments that have been used again and again, without the issues ever having being resolved. Farage had the opportunity to put some of them to bed. But, as so many are now observing, the UKIP leader doesn't do detail, the sort of detail that you'll find in my FLexCit plan. For all that, in presentational terms, he didn't do badly, he didn't do well enough to make a dent in Clegg's arguments.

And, on the final "killer" question on why countries like Ukraine were lining up to join the EU, Farage could have pointed to the fact that two of the most vibrant democracies in Europe, Iceland and Norway, had been given the choice, and their peoples had refused to join.

Overall, of course, he didn't do badly. We have always accepted that Farage is a good performer. But he didn't do well enough. And, in his closing remarks, he concluded that he thought most people were on his side, wanting to leave the EU. But, in fact, they're not - the man is out of touch. As The Boiling Frog remarks, the latest poll from YouGov on "Brexit" gives 42 percent wanting to stay in and only 36 percent wanting to leave – a six percent margin for the inners.

Over time, therefore, we are losing the argument. And it's not that we're doing badly - we're just not doing well enough. Farage supporters, of course, thought their man did well, and Clegg supporters thought their man did well. A snap YouGov poll, however, gave Farage 57 percent and Clegg 36 percent. On the face of it, Farage wins.
This, though, is a snap poll biased by the fact that it was a self-selecting cohort of those who were interested enough to watch the show. In that context, a majority thought Farage a better performing seal than Clegg, but that is neither here nor there. Farage may be winning the beauty contest but we are losing the argument on the larger debate.

Interestingly, Dan Hodges suggests that the instant polls were bound to show Farage the victor. Cheap populism is superficially popular, he says, then adding: "But once again Nigel Farage showed the nasty side of his politics, if not his character".

But it is the larger debate that really matters. Bleeding into this local affair, questions were asked and they were not resolved. It was a good show, if you like beauty parades – but not good enough. As the Independent remarked, neither side landed a killer blow. Thus, as long as the Brexit poll tells its dire story, the message to Farage comes straight out of the old school report lexicon: "must do better".