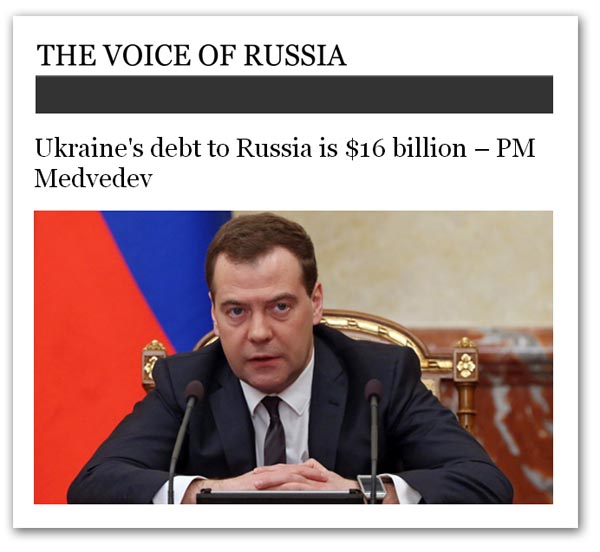 Anyone who really thinks that Russia is about to roll over and go quietly, is misleading themselves. Yesterday, for instance, at the meeting of the Russian Security Council, Russian prime minister Dmitry Medvedev stated that Ukraine's debt to Russia had now reached $16 billion.
"Ukraine has quite a considerable debt to the Russian Federation, both public and corporate", he said. "I think we cannot afford losing such sum of money, given the fact that our budget has its own difficulties".

In part, this comprises a $3 billion loan, and an accumulated debt of about $2 billion. But, earlier on Friday, Medvedev said that the Kharkov agreements with Russia on gas, with a discount at a rate of $100 per thousand cubic meters, were subject to "denunciation".

In April 2010, Russia and Ukraine signed an agreement in Kharkov, extending the stay of the Russian Black Sea Fleet in Ukraine for 25 years beyond 2017. In exchange, Kiev received a discount on Russian gas at a rate of $100 per thousand cubic metres. Now that the deal is over, Kiev must reimburse $11 billion to Moscow, Medvedev declared. This brings the total sum of obligations to some $16 billion.

The way this works, according to Medvedev, is that Russia had suffered a loss of benefit to the tune of $11 billion. "It perfectly stands to reason to ask Ukraine to pay off that amount of money from Ukraine's budget in terms of compensation. This could otherwise be achieved through the courts, on the basis of provisions of the agreement denounced", he said.

This, of course, is just the start of what could be a long war. David Cameron can "warn" all he likes that Russia faces international isolation and tighter sanctions unless it takes steps to de-escalate the crisis in Ukraine.

It is this sort of comment that makes one wonder just how well informed our prime minister actually is, and just who is briefing him, to what effect. This seems to be more than just FCO disinformation.

The EU may be preparing for a trade war with Russia, setting out to ramp up the so far derisive sanctions, but that is going to have about as much effect as Mr Cameron's empty posturing.  But a further indication that Russia's fightback will not take military form comes with a report that the federation had accepted the deployment of an Organisation for Security and Cooperation in Europe (OSCE) monitoring team to Ukraine.

Its monitors are to be given free access to all regions, and they have a six-month mandate. Initially, the team will consist of 100 observers; an additional personnel could be deployed if necessary.

As for Crimea, the situation develops apace. We hear that more than 70 military units of the Armed Forces of Ukraine, including 25 ships of the secondary fleet and six combat ships of the Ukrainian Naval Forces, have hoisted the Russian flag.

This and the more mundane tasks of integrating Crimea into the Russian economy, as well as sorting out such vital issues as water and electricity supplies will, it is reckoned, keep the Russian administration fully occupied. It is thought unlikely that Putin will move into eastern Ukraine, integrating the Russian-speakers of Kharkov and Donetsk. At this stage, this would be seen as too inflammatory, and the Russian president can afford to play the long game.

CNN is reporting, however, that Obama administration officials are very concerned that Russia – as early as coming days – could use any number of pretexts "to justify further military incursions into Ukraine". The Russians admit to forces near Ukraine's eastern and southern borders, but deny any hostile intent, saying that they are merely there for training exercises.

That said, there have been reports of disturbances in Kharkov, only 25 miles from the Russian border, with violent clashes between pro-Russian demonstrators and Ukrainian nationalists. But, while it is said that if the Russian tanks arrived, they would be greeted with flowers, the Ukraine Army is quietly increasing its presence in the region, with many troop movements observed.

But an ironic comment comes from a local electrician Radion, who says a spontaneous demonstration of more than one hundred people blocked a Ukrainian military convoy near the town of Mitchourino this week.

"The people here are patriotic", he says, "but we do not like this stupid political confrontation, which Kiev is 100 percent responsible for". "In fact, the only reason Kiev is worried about a Russian takeover here, is because they would no longer be able to steal from us in the same way they do in the west of the country".

Either way, it seems, one former major player will be on the sidelines. During the Ukrainian prime minister's visit to Washington last week, his government urgently requested military assistance. The Pentagon refused, instead offering military ration kits.
France, meanwhile is having to deal with the fallout of the crisis, mooting whether to cancel the sale of Mistral-class helicopter carriers to Russia, worth €1.2 billion to the French economy. If the sale does go ahead, though, perhaps the French might be prepared to help Ukraine to pay its bills to Russia. Otherwise, if the sale doesn't go ahead, Russia will be demanding compensation, adding further to the unsettled bills.

Altogether, this crisis has a long way to go, and we are only just beginning to see the ramifications.