UKIP: the direction of travel

Despite the EU role in the Somerset flooding, the debacle over Ukraine, the corporate tax avoidance arising from EU's "free movement of capital and payments" provisions, the horsemeat scandal, the silicone breast implants scandal, and sundry other EU-inspired disasters, the latest poll on leaving the EU gives the "outers" 39 percent and the "inners" 41 percent.

With a two percent lead to those who want to stay in the European Union, you might ask what it takes actually to get people to want to leave the evil empire.

But then, most people haven't been told about the EU role in the Somerset flooding, Ukraine, tax avoidance, horsemeat, breast implants, etc., etc. In the main, all they get from the media is the low drone of assorted FUD, with very little counterbalancing intelligence on how the UK could remain in the Single Market once it had left the EU.

It is perhaps unsurprising, therefore, that the majority support the status quo, staying in the European Union. But there is more to it than that. Alongside the FUD, we've also been getting a steady drip-drip of publicity hostile to UKIP, in the Times and then the latest offering from the Daily Mail. This projects the party's London HQ as a bizarre freakshow. It paints a picture that would have most normal people crossing the road to avoid contact with the party, driving out any thought of voting for Mr Farage.

That certainly seems to be the case with at least 80 percent of the population, as the latest ICM poll on European election voting intentions indicates (below). This has 20 percent opting for UKIP, 35 percent for Labour, 25 percent for the Tories and the Lib-Dems on 9 percent. 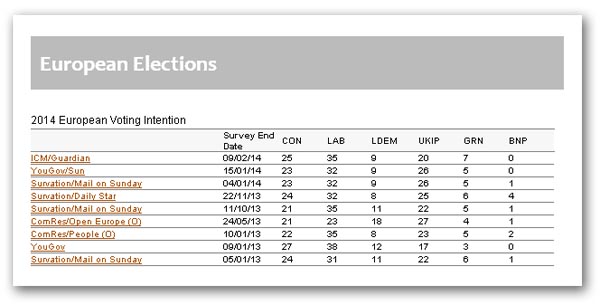 Against historical performances, 20 percent is an encouraging figure, although it now puts UKIP in third place, and a very long way from the "political earthquake" promised by Mr Farage. If all he is able to deliver is third place, his credibility is on the line. But so is the credibility of the entire anti-EU movement, especially as Mr Farage wants the euro elections to be a referendum on the EU.

Furthermore, on general voting intentions, the news is even glummer. Labour stands at 38 percent, and the Conservatives creep in with 35 percent. But UKIP drops back to just nine percent in fourth place, while the Lib-Dems claw back third position with 12 percent of the poll.

This is against a background of UKIP flatlining in the polls. Ever since the May "surge", the UKIP vote has been on the decline. Now, YouGov has the party oscillating between 11-14 percent, with very little movement out of that range for more than six months.

In a real life parliamentary by-elections, however, we are seeing much the same thing. At Wythenshaw, the party attracted only 5.7 percent of the electorate, with an overall turnout of 28 percent. In South Shields, it took a 9.4 percent share of the electorate. It took 14.8 percent share at Eastleigh, and 7.3 percent of the available vote at Rotherham.

With the one exception of Eastleigh, therefore, the party has been unable to mobilise more than ten percent of the electorate. It shows no evidence of having re-energised electoral politics, as turnouts remain poor. And, against the baseline of Eastleigh, the party's electoral support is going down. That is roughly what the polls are showing: gradually declining popular support and no sign of an electoral breakthrough.

All of that renders rather irrelevant the message of booksellers Robert Ford and Matthew Goodwin. As some time political analysts, they are trying to sell the message that UKIP has greater potential than its poll results indicate. In theory, that may be true, but it also illustrates that they are out of their depth.
In terms of "potential", a political party dedicated to leaving the EU (supposedly) should be able to pull in the bulk of the 39 percent who say they want to leave the EU. Such people should, potentially at least, be UKIP supporters. But, as we saw last year, the party also invites some pretty sharp reaction, with 43 percent of voters declaring the would never vote for it under any circumstances. More recently, we saw UKIP as the least liked and most disliked party. 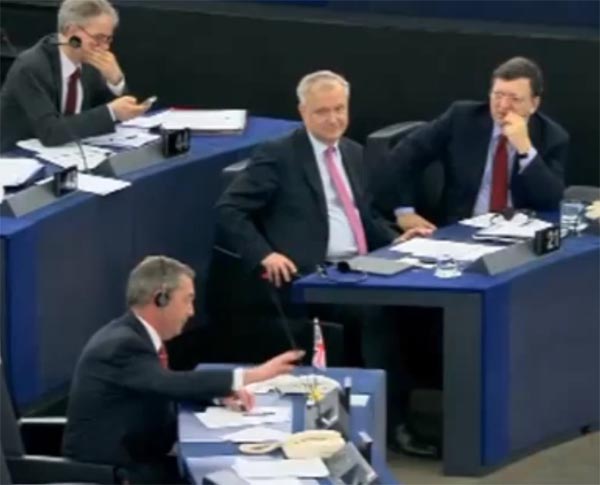 As stories abound of bizarre happenings in the party, only so much can be put down to "smears". To be asked why he is paying both his wife and his former mistress from his official secretarial allowance (note Barroso watching in the background) is not something which can easily be ignored, especially as the legacy media have been exceptionally quick to pick up the story.

Under such circumstances, a British MP would find it hard to keep his seat - a leader of a serious political party more so, especially when he is attracting critical comment of an extremely damaging nature.
Such low-grade revelations will continue, though, because, at its heart, UKIP is not a serious political party. And the percentage of "never" voters can only increase. But, even if hostile stories are dismissed as "smears", there is something which Ford and Goodwin clearly do not understand about the party. And that "something" explains what is happening. It explains the poll results.

Essentially, UKIP is not only fundamentally unserious. It is an empty vessel, devoid of any substance. The party has been strident on the subject of immigration, openly courting the BNP vote - as Mr Farage has been happy to acknowledge - but when it comes to leadership on issues such as the Somerset flooding, Ukraine, tax avoidance, horsemeat, breast implants, etc., etc., its voice has been uncertain, weak and often contradictory.
If it had substance, a solid core, it could ride the smears and still make converts. But the closer people get to the party and the more exposure it gets, the more apparent the emptiness becomes. Unable to counter the FUD, and lacking ability to put the EU on the spot, it seems to be losing us the wider battle, as well as its own battle for votes. It may be a "eurosceptic" party, but by no measure can it be said to be leading a coherent, much less growing, anti-EU movement.
Inertia may get it some sort of electoral victory in the euros, but the chances of it "winning" the contest outright are now receding. And, on current results, the chances of us winning an "in-out" referendum are nil. That much we do know, now we know the direction of travel. The paths of UKIP, the political party, and the anti-EU movement are diverging. The one is no longer the other.