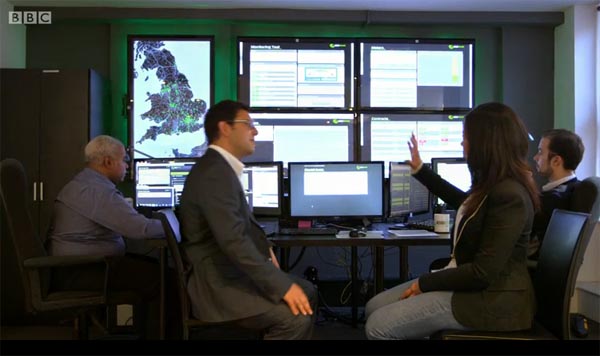 The BBC programme "Bang goes the theory" looked last night at the UK's electricity supply and the possibility of power failures. And, without actually identifying it as such, it discussed STOR as a back-up for intermittent wind power, featuring the aggregator KiWi Power Ltd (sequence from 21:25).

Yet, with a heavy emphasis on "green energy", and "carbon reduction targets", there is one very prominent omission from the BBC account. Although KiWi Power offers back-up diesel generation as part of its product mix, there is no mention of this by the BBC.

Instead, the three BBC lovelies, Jem Stansfield, Liz Bonnin and Maggie Philbin, take us through demand side management (DSR), the acceptable face of STOR where, for a fee, willing companies shut down such things as air conditioning to reduce peak demand when the grid is "maxed out".

However, there is no way that anyone looking at Kiwi Power, even at the most superficial level, could avoid knowing something of its diesel generation operations. It is on the company details page of its website (illustrated below). The decision to omit this crucial detail must, therefore, have been deliberate.

But we know even more about Kiwi Power, as we recall here. On 20 September 2010, its cynical message to the Financial Times was that selling capacity to the grid was "Money for nothing", something the BBC also failed to mention.
Yet this is also a company that sells "dirty" diesel-generated electricity while concealing it behind a veneer of "green" operations, promising to shrink its clients' carbon footprints - while in certain circumstances increasing it. And this false image the BBC is happy to foster. 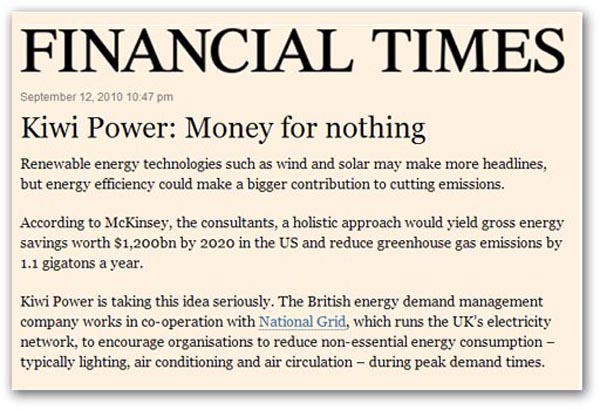 Back in 2010, though, it gets even more interesting. Then KiWi Power was telling the Financial Times that it wanted to work with the National Grid, exploiting a British market thought to be worth £1 billion by 2015, equivalent to five percent extra on our electricity bills - something the BBC also forgets to mention.
Through demand response, operators could make £5,000 to £50,000 a year, KiWi Power's director, Ziko Abram, said. But that was never the major part of the company's business. The real money was always in larger sites with back-up diesel generators, sold by the company as the easiest way to get started and "turn a cost centre into a source of profit". Clients could receive more than £100,000, selling dirty electricity to the grid via KiWi Power.

Even then, as this document indicates, some of that capacity may not even exist  known in the trade as phantom Megawatts. Much of the STOR trade is fraudulent.

But nothing of this gets past our state broadcaster. Instead, it tells its lies. For the BBC, the future must be "green" and the idea of wind energy relying on dirty diesel back-up is not one that fits its narrative. Nor can we be allowed to know that it is costing us a fortune.  And so the lie is told. KiWi Power's "Money for nothing", the little BBC girlie trills, "could save millions".

This, of course, is the EU-loving BBC that Booker reported on Sunday as having taken £20 million from the EU  something we might have mentioned on this blog. Interestingly, although this has now been carried by Booker's newspaper, not a single other media source has used the story, much less mentioned the salient fact that the BBC lied to the Spectator and the magazine fell for the lie.

Could it really be that such a juicy little tit-bit about the BBC completely escaped the attention of the rest of the media by accident? Or would it be just too much that the great Spectator should be embarrassed by a lowly blogger?

Come to think of it, was it that same lowly blogger that broke the STOR story? And was that same story then ignored by the bulk of the media, including  currently  the BBC?

Thus do they all lie. We are fed their droppings, and we are supposed to like it, to be grateful to them. But they are a disgrace to the very notion of a free, independent media.