Ukraine: as any FŘle know 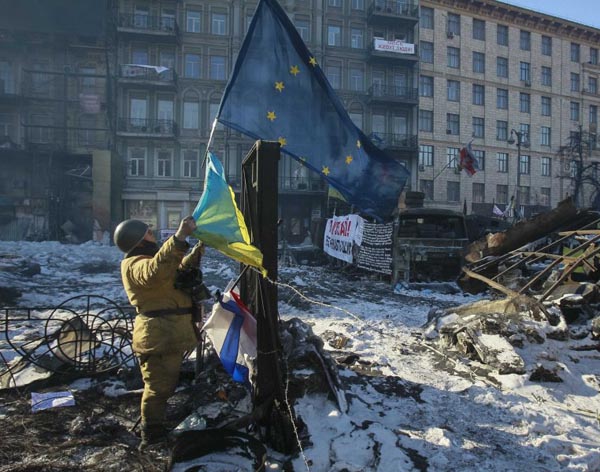 An interesting reflection of the current Ukraine crisis is, as one commentator observes, that no one saw it coming.

If the pundits had read this, though, they may not have been quite so surprised. It is the outline to the Association Agreement that Ukraine was expecting to sign at end of November, one which too many still believe was merely a trade agreement.

We aver that the extent of this Agreement was such that it sought to peel the Ukraine away from the Russian sphere of interest, and lodge the country firmly in the EU camp, as a prelude to full-blown EU membership. And this hugely provocative action, we suggested, was something no Russian leader could allow to go unchallenged.

One might have thought by now that the EU hierarchy might have learned some lessons from the experience, and backed off from "poking the bear", having realised that there could only be one outcome.

However, even with tension at its height, we have in the European Commission the demeanour of the Bourbons, who have learned nothing and forgotten nothing.

These catastrophic traits are currently embodied in Őtefan FŘle, by name and nature. As Commissioner for Enlargement and European Neighbourhood Policy, he has been up-front in negotiating with Ukraine its putative entry into the European Union, and is doing exactly the same thing with Georgia.

Demonstrating the Bourbonesque tendency, he was in Tbilisi yesterday, delivering a speech about the "myths and true benefits of [the]Association Agreement". And if, for "Georgia", you read "Ukraine", you will realise exactly why Putin is acting as he is.

FŘle starts his speech by saying this is "an exciting year for relations between the European Union and Georgia". After initialling our Association Agreement (AA) and Deep and Comprehensive Free Trade Area (DCFTA) at the Vilnius Summit last November, he says, "we are now moving ahead at full speed to finalise the technical work so that we can sign the agreement already in the summer, and begin working on its implementation".

That was exactly the situation with Ukraine, and FŘle goes on to explain exactly what was involved. The Agreement, he says: ů it is far more than a set of rules and regulations; it represents much more than a trade agreement. It will introduce reforms that will progressively bring Georgia to resemble the Member States of the European Union - economically, socially, and politically;

Second, it will embed core European values of mutual respect, tolerance, and the rule of law into Georgian public life;

Third, it will bring predictability and consistency to public life, not only in the rules and regulations which govern economic activity, but also in the services and rights which citizens can expect from their government; and

Fourth, in due course, it will deliver a higher quality of life to all Georgians. Signing the Association Agreement, he later says in the speech, "will mean that Georgia [insert 'Ukraine'] chooses Brussels instead of Moscow". And there you have it. The EU presented Ukraine with a choice of Brussels instead of Moscow, and Moscow reacted in an entirely predictable way.

During the course of his speech, the FŘle notes that, over recent weeks we have all watched the unfolding events in Ukraine with enormous concern. One thing is clear, he says: "the Euromaidan demonstrators were not fighting for an improved trading relationship with the European Union".

And indeed they were not, despite the ignorant assertions of so many pundits. The FŘle goes on, "They were fighting for a different way of life, one where they were free of corruption, one where the citizens come first". He adds:

They knew that the Association Agreement / DCFTA with the European Union, which was to have been signed at Vilnius could help deliver this; and this is why they reacted so angrily when their leaders changed their mind and broke their promise to deliver this agreement.

As to the reaction on the streets, this may have caught the Russians out ľ their turn to be surprised. But it wouldn't have made any difference. Faced with this level of EU meddling, the Russians had no option but to react in the way they did, pressuring the Ukraine government to reject the Agreement.

Georgia, sandwiched between Azerbaijan and Russia, and no land border with the EU, is perhaps less sensitive, but the move into Ukraine, bordering on EU members Poland, Slovakia, Hungary and Romania, represents an unacceptable encroachment of the EU into the Russian sphere of interest.

For Ukraine, when it comes to Brussels and Moscow, there is only one choice. And the longer it takes Brussels to realise this, the longer drawn-out and the more dangerous this crisis is going to be. Wherever that accursed ring of stars goes, there will be trouble.