EU politics: not within her gift 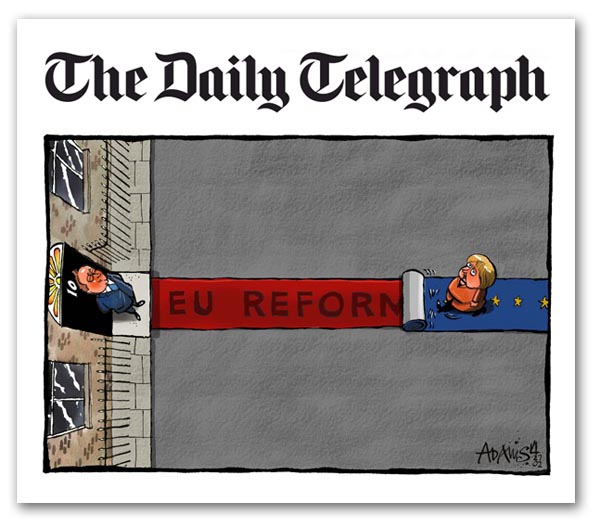 If we were to run with the herd today, we would be getting excited about Merkel's visit to England, attended upon by much ill-informed speculation and comment about her intentions regarding Mr Cameron and his fatuous EU reform agenda.

In the lead for the moment - but not for very long, I suspect - is this totally vacuous comment by James Kirkup, who blathers: "But will Mrs Merkel sign up for the entire Cameron agenda, including the (pretty ambitious) timetable for EU treaty change signed and sealed by 2017?"

What will escape most commentators is the rather obvious fact that the EU currently boasts 28 members and that, in order to initiate the treaty revision procedure under Article 48 of the TEU  necessary for any meaningful reform  a simple majority is needed, i.e., 15 member states.

Thus, as we remarked with Hollande a little while back, it is not within Mrs Merkel's gift to grant Mr Cameron his wish of a treaty negotiation. And, even if she could (and wanted to, which is another matter), any changes proposed could be vetoed by any one member state, either at the signature or (in effect) the ratification stage.

On the other hand, we have been led to expect that Mrs Merkel would be concentrating on a bid to keep the UK within the EU, to which effect we can expect in the near future the usual doses of FUD to be trickling through the legacy media, all aimed at keeping us plebs in our place. 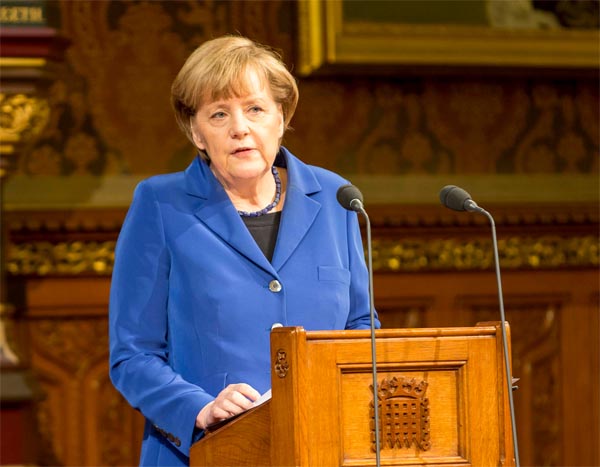 In her address to both houses of Parliament, in a lacklustre, technocratic speech (transcript here in German), Mrs Merkel did not fail to disappoint. "We must make the European Union a better place  a strong EU needs strong institutions and strong member states representing our common interests united and confident in the world", she says ... all batting from the same hymn sheet?

On the euro, she says: "A stable, competitive European Union can combine economic success and social responsibility on a permanent basis. This requires the eurozone countries to complement the monetary union with a strong economic union, which is equipped with a clear and sustainable architecture.

"Only through a closer and more binding economic policy coordination can they prevent in the long term entering a severe crisis. That limits the contractual foundations of economic and monetary union which, in my view, must be specifically adapted and expeditious in order to sustainably stabilize the monetary union".

In English, she then told the assembled worthies, "Some expect my speech to pave the way for a fundamental reform of the European architecture which will satisfy all kinds of alleged or actual British wishes. I am afraid they are in for a disappointment".

Then she went on to say: "Others are expecting the exact opposite and they are hoping that I will deliver the clear and simple message here in London that the rest of Europe is not prepared to pay almost any price to keep Britain in the European Union. I am afraid these hopes will be dashed too".

Meanwhile, we must suffer endless drivel from supposedly "eurosceptic" MPs and others, most of them still oblivious to the reality that "reform" is simply not an option. Why we have to go through these endless rituals is quite beyond me, but I do wish they would get it over with and start focusing on the real world.

We even have Nicholas Watt, chief political correspondent of the failing Guardian perpetuating the myths. He writes: "The speech appeared to be designed to inject a dose of reality ahead of the negotiations, in which the prime minister hopes to introduce widespread reforms of the EU if he wins the 2015 general election. Cameron would then hold an in / out referendum by the end of 2017".

For once, the Telegraph cartoon has it. In the short time between my publishing it and being told to take it down, you can enjoy it here.