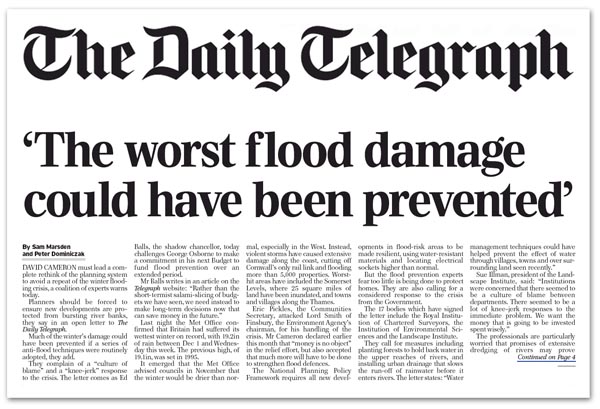 "The worst flood damage could have been prevented" proclaims the Telegraph front page, retailing the views of the "experts" who claim to have "the experience necessary to tackle flooding".

Actually, these are the guilty men, who are throwing up one vast smokescreen to conceal their complicity in action which directly led to the flooding disaster and magnified its effects. Thus, the headline should have read: "The worst flooding could have been prevented - and we failed to do it".

For a period of nearly 20 years, a series of decisions taken, by multiple agencies and professionals have gradually distorted and then perverted flood management policy, from a process of flood prevention, and the protection of life and property, to one of deliberately encouraging flooding.

Now the self-same professionals, those representing institutions largely responsible for the policy changes, presume to instruct Mr Cameron on what he should do next, including "exploring" the discredited Monbiot meme of "how measures like planting trees can hold back water in the upper reaches of rivers".

And rather than Mr Farage's ill-considered call for an inquiry, what increasingly looks likely, flowing further illustrations of the losses suffered, is a class action, suing Defra, the Environment Agency, Natural England, and the Internal Drainage Boards, for their actions and failures which led to the flooding.

Here, it is interesting to see the views of farmer James Winslade, who started an appeal which led to farmers from all over the country bringing hay and feed to Sedgemoor Auction Centre off the M5 in Somerset.

He had to move his 500 beef cattle off the 700-acre farm at Moorland that his family have tended for three generations and says it will be at least eight weeks before he can get back on his land.

"The response from the industry has been incredible", he says. "But this is a long-term major incident for farmers in the South West and we will still be needing help in winter next year. The water on my farm is five or six feet deep and it will take around eight weeks to drain away". He adds: "By the time I get back it will be May or even June and it will be too late to drill any crops so I will be going into next winter without any food".

But what is of very great interest is Mr Winslade saying that he lost Ł200,000 worth of animal feed that will not be covered by insurance and faces a major clean-up operation in three flooded-out properties.

After flooding last year he had to borrow Ł153,000 to keep the farm going but now says: "If I had to borrow that kind of money again it would not be viable but I'm hoping that because the Environment Agency have all but admitted this is all their fault, we should be able to claim against Defra".

Mr Farage talks glibly about diverting foreign aid to the people affected by the floods, saying that charity should begin at home. But it is not charity that farmers such as Mr Winslade and other flood victims need. It is compensation for the actions and failures of public officials and their professional allies.

We should not allow then to retire under the cover of the smokescreen that they are creating, and escape responsibility for their deeds.