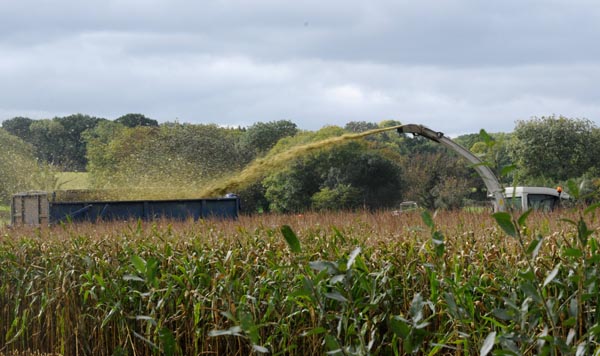 So far, we have addressed an assertion by Mr Monbiot that growing maize on the hills which form the catchment to the Somerset Levels has caused the extensive flooding that we have seen over the last three months.

Extravagant though this claim might sound, the great flood expert evidently felt confident enough to make it on the basis of a visit to the Levels on Tuesday week last, and a journey along the road from High Ham to Burrowbridge (most of which is impassable), where he witnessed some man-made flooding and claimed to have seen (or implies that he has seen) run-off from fields of harvested maize.

Armed with this "evidence", Mr Monbiot tells us that, last Friday, he travelled to the source of the Thames. Within 300 metres of the stone that marked it were ploughed fields, he tells us. They were overhanging the catchment, left bare through the winter and compacted by heavy machinery.

"Muddy water", he says, "sluiced down the roads". "A few score miles downstream", he then asserted, "it will reappear in people's living rooms. You can see the same thing happening across the Thames watershed: 184 miles of idiocy, perfectly calibrated to cause disaster".

To Mr Monbiot, this brings to mind "two realities, perennially denied or ignored by members of this government". They now "seep under their doors". In September the environment secretary, Owen Paterson, we are told, assured us that climate change "is something we can adapt to over time and we are very good as a race at adapting". 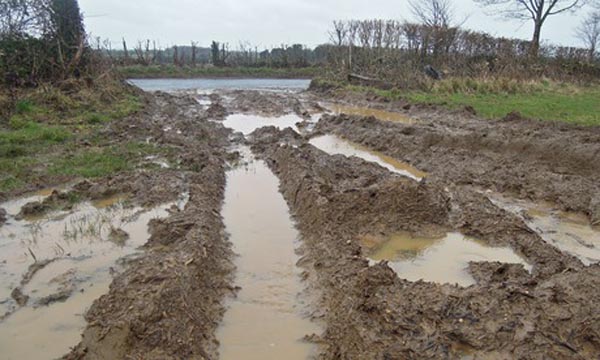 This invites the comment from Mr Monbiot that, "If two months of severe weather almost sends the country into meltdown, who knows what four degrees of global warming will do?"

This aside Â– although doubtless we will need to come back to it Â– we are now confronted, at the invitation of Mr Monbiot, with a second issue. Once it trickles into national consciousness, we learn from him, is just as politically potent. This is "the government's bonfire of regulations".

Now, it seems we are getting to the source of Mr Monbiot's allegation, that we have ended up paying farmers to flood our homes. Just as a reminder, we have been told in no uncertain terms that, this government let the farming lobby rip up the rulebook on soil protection Â– and now we are suffering the consequences.

The thrust of Mr Monbiot's evidence is that, as soon as the Coalition government took office, it appointed a task force to investigate farming rules. Its chairman was the former director general of the National Farmers' Union and, writes Mr Monbiot in prose heavily laden with irony, "Who could have guessed that he would recommend 'an entirely new approach to and culture of regulation Â… Government must trust industry'"?

The task force's demands, we are told, were embraced by Paterson. And they now look as stupid, says Monbiot, as Gordon Brown's speech to an audience of bankers in 2004: "In budget after budget I want us to do even more to encourage the risk takers".

So far though, we are a little light on detail, but Mr Monbiot is enjoying himself. He is in no hurry to get to the point.

Six weeks before the floods arrived, he tells us, a scientific journal called Soil Use and Management published a paper warning that disaster was brewing. Monbiot asserts that Surface water run-off in south-west England, where the Somerset Levels are situated, was reaching a critical point.

Thanks, says Monbiot, to a wholesale change in the way the land is cultivated, at 38 percent of the sites the researchers investigated, the water Â– instead of percolating into the ground Â– is now pouring off the fields. And nothing of substance, the paper warned, is being done to stop it.

The paper, however Â– as Monbiot must know Â– is protected by a paywall. Despite it having been produced with public funds, we must pay to see it. The vast majority of Monbiot readers, therefore, will not be able to read it, even though he assiduously references it in his blog version of his article. So he evidently feels safe in his assertions, and free to misrepresent the paper.

Working on just the abstract though, which is free access, thus gives us useful information. It tells us:

Field investigations between 2002 and 2011 identified soil structural degradation to be widespread in SW England with 38% of the 3243 surveyed sites having sufficiently degraded soil structure to produce observable features of enhanced surface-water runoff within the landscape. Soil under arable crops often had high or severe levels of structural degradation. Late-harvested crops such as maize had the most damaged soil where 75% of sites were found to have degraded structure generating enhanced surface-water runoff. Soil erosion in these crops was found at over one in five sites.

Relying on detail the majority will never see, though, Mr Monbiot tells us that farmers have been ploughing land that was previously untilled and switching from spring to winter sowing, leaving the soil bare during the rainy season. Worst of all is the shift towards growing maize, whose cultivated area in this country has risen from 1,400 hectares to 160,000 since 1970. And that, according to Mr Monbiot, it the cause of the floods.
Just addressing this issue, though, according to government statistics, in 2011 the total land used for maize cultivation was 164,000 hectares but, including the grain crop, it had increased to 194,000 hectares in 2013.

However, this compares with 17,256,000 hectares given to agriculture and 4.5 million hectares in arable use. In other words, maize growing accounts for just over one percent of total farming area (1.12 percent), and four percent of the land under the plough. This, we are led to believe, is responsible for the bulk of the flooding nationally.

As to the South-west, according to the leading grain merchant in the region (personal communication), about 37 percent of the total maize production comes from the counties of Cornwall, Devon, Somerset, Gloucester, Wiltshire and Dorset, of which a mere 8,000 hectares is grown in the whole of Somerset.

Speaking with local farmers, the view is that acreage in the area has not changed over the last five years. In fact with wetter autumns many farmers have changed to whole crop cereals which are harvested earlier. Others on more favourable land may have increased acreage "a bit".

The further east you go, the more maize is grown as it needs a hot but dry climate to avoid mould diseases and be mature enough for early harvesting. On the damp, west coast, it is regarded as a "difficult" crop. 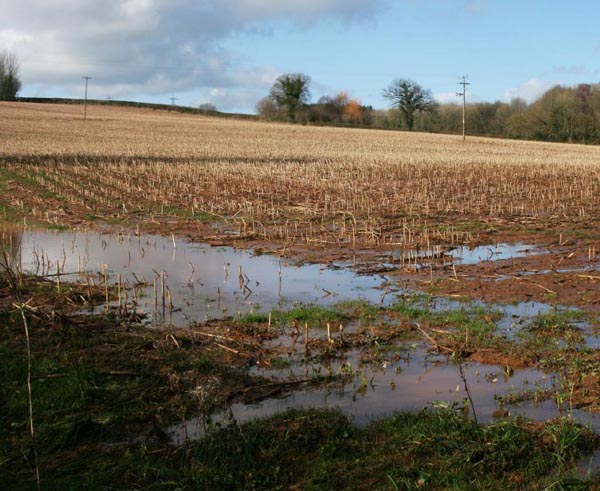 Heedless of these details, though, Mr Monbiot relies on taking things out of context and scale. Some might call it cherry picking. In three quarters of the maize fields in the south-west (the whole south-west), he asserts, the soil structure has broken down to the extent that they now contribute to flooding. In many of these fields, soil, fertilisers and pesticides, he says, "are sloshing away with the water".

At this point, let us again remind ourselves of Mr Monbiot's assertion, that we have ended up paying farmers to flood our homes. We have been told in no uncertain terms that, this government "let the farming lobby rip up the rulebook on soil protection Â– and now we are suffering the consequences".

Yet, with the help of an academic paper Â– even relying on contents which are undisclosed to the general public Â– all he can give us is that: "In three quarters of the maize fields in the south-west, the soil structure has broken down to the extent that they now contribute to flooding".

In order to deconstruct this statement, we need to ask a few question, for instance, of the maize fields monitored in the South-West over the study period of nine years, how many were actually in Somerset? And then, how many were on the hills which formed the catchment areas which drain into the Levels?

Of course, we don't have that information. Neither, I suspect, does Mr Monbiot. And, in its absence, what have we got?

Putting it together, we have an unknown number of maize fields in Somerset. We know there is maize in Somerset - we have a photograph of harvesting at the top of this post, and the pesky farmers actually admit to growing 8,000 hectares.
But a lot of it is on level ground. You need heavy equipment to do the harvesting, and it is not easy to use on steep slopes. Much of it is grown in the southwest of the county, where the fields drain away from the Levels.
Thus, there is, necessarily, a lesser acreage on the hills which form the catchment areas which do drain into the Levels - considerably less than 8,000 hectares. From an inspection of the area using Google street view, taking advantage of photography done at in the same period as the academic survey, we actually know that there are relatively few such fields. Most of the hills are wooded, an observation endorsed by Natural England, which records of the Mid-Somerset Hills: "Generally well-wooded on ridge tops".

Thus, we have an unknown number of maize fields, in unknown locations, with the amount on slopes draining into the levels also unknown, but very much less than 8,000 hectares. Then, purely on the assertion that 75 percent of sites on which late-harvested maize was grown were found to have degraded structures, this generating enhanced but unspecified levels of surface-water runoff, we are thus instructed that this was enough to "contribute" to the flooding of the 60,000 hectares of the Levels.
There we have it. In detail, though - despite the headline to his piece - even Mr Monbiot isn't actually claiming that run-off from harvested maize fields actually caused the flooding. Merely, it contributed to it. But a bucket of water thrown onto a road, then to drain to the Levels, could contribute to a flood.
Without quantification, without some idea of scale, the word is meaningless. With quantification, even if we took the whole Somerset production of maize, the 75 percent that contributed to the flooding is about 6,000 hectares. This is supposed to be responsible for flooding 60,000 hectares - ten times the area, in some places to a depth of ten feet or more. The notion is absurd.

Even then, in terms of actual hard evidence adduced by Mr Monbiot, all we actually have is a couple of photographs (one shown above) taken near the source of the Thames, neither showing maize fields, and neither of them in Somerset. Try as we might, we are not impressed. We'll just have to try harder in Part III, I suppose.