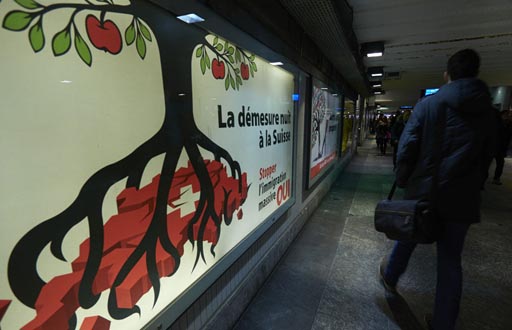 When it was announced last November, the British media hardly wanted to know. But now, with so much at stake, they are finally taking an interest in the Swiss referendum on EU immigration.

The vote, held yesterday, comes 12 years after an agreement with the EU on free movement of people came into force - the Agreement on the Free Movement of Persons, which came into force on 1 June 2002. With it came the mutual recognition of professional qualifications, the right to buy property, and the coordination of social security systems.

Now, in what is termed a "nail-biting vote", 50.3 percent of voters have backed the so-called "Stop mass immigration" initiative. It also won the required majority approval in more than half of Swiss cantons.

Much to the Swiss federal government's chagrin, the outcome obliges it to turn the Swiss People's Party (SVP) initiative into law within three years, imposing quotas on immigrants from the EU.

Apparently, we are told, there will not just be quotas but also restrictions on the right of foreigners to bring in family members and access social services. Businesses must give Swiss nationals priority when hiring staff. There will be a new clause in the constitution stating that migration must serve the nation's economic interest.

This puts Switzerland on a collision path with the EU. The entire set of EU relations could be suspended under a guillotine clause which can be triggered if any part of the EU-Swiss agreement is violated.

The entire raft of its bilateral deals is now at risk, leading the Swiss Banking Association to remarks that, "Explanatory and constructive talks with the EU are needed urgently".

In fact, Brussels has already warned the Swiss government - which campaigned for a "no" vote - that it will have to renegotiate its treaty agreements with the EU, unravelling 16-years of negotiations that got it this far.

However, of even greater interest, this puts the people in direct confrontation with their own ruling elites. They have had enough and, despite the entire establishment warning them of dire consequences, the majority have taken their stand.