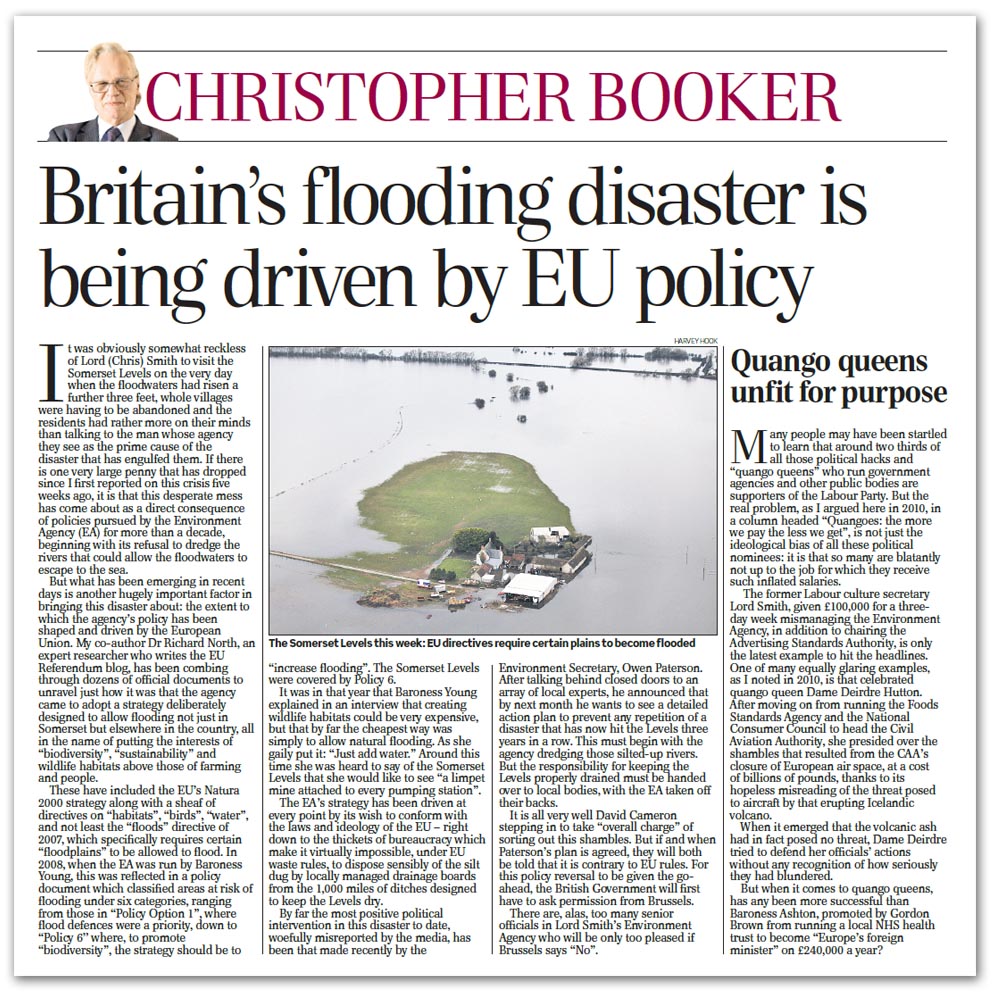 Booker takes on the European Dimension of the Somerset floods with the lead piece in today's column. Had Farage been on the ball he might not have made a serious error in failing to pick up the story, but at least that left the field open for Booker to break the news in the legacy media.

It was obviously somewhat reckless of Lord (Chris) Smith, Booker writes, to visit the Somerset Levels on the very day that the floodwaters had risen a further three feet. Whole villages were having to be abandoned and the residents had rather more on their minds than talking to the man whose agency they see as the prime cause of the disaster that has engulfed them.

But now the story is out, with the EU's Floods Directive taking centre stage, its presence so undeniable that even the Irish admit it's there.

What has been emerging, Booker says, is the background to how it was that the Environment Agency came to adopt a strategy deliberately designed to allow flooding not just in Somerset but elsewhere in the country, all in the name of putting the interests of "biodiversity", "sustainability" and wildlife habitats above those of farming and people.

These have included the EU's Natura 2000 strategy along with a sheaf of directives on "habitats", "birds", "water", and not least the Floods Directive of 2007, which specifically requires certain "floodplains" to be allowed to flood.

In 2008, when the EA was run by Baroness Young, this was reflected in a policy document which classified areas at risk of flooding under six categories, ranging from "Policy Option 1", where flood defences were a priority, down to "Policy Option 6" where, to promote "biodiversity", the strategy should be to "increase the frequency of flooding". The Somerset Levels were covered by Policy Option 6, aimed at turning them into "habitat museums".

It was in that year that Baroness Young explained in an interview that creating wildlife habitats could be very expensive, but that by far the cheapest way was simply to allow natural flooding. As she gaily put it: "Just add water". Around this time she was heard to say of the Somerset Levels that she would like to see "a limpet mine attached to every pumping station".

The EA's strategy has been driven at every point by its wish to conform with the laws and ideology of the EU – right down to the thickets of bureaucracy that make it virtually impossible, under EU waste rules, to dispose sensibly of the silt dug by locally managed drainage boards from the 1,000 miles of ditches designed to keep the Levels dry.

By far the most positive political intervention in this disaster to date, woefully misreported by the media, has been that made recently by the Environment Secretary, Owen Paterson. After talking behind closed doors to an array of local experts, he announced that by next month he wants to see a detailed action plan to prevent any repetition of a disaster that has now hit the Levels three years in a row.

This must begin with the agency dredging those silted-up rivers. But the responsibility for keeping the Levels properly drained must be handed over to local bodies, with the EA taken off their backs.

It is all very well David Cameron stepping in to take "overall charge" of sorting out this shambles. But if and when Paterson's plan is agreed, they will both be told that it is contrary to EU rules. For this policy reversal to be given the go-ahead, the British Government will first have to ask permission from Brussels.

There are, alas, too many senior officials in Lord Smith's Environment Agency who will be only too pleased if Brussels says "no".