Booker: floods, treaties and other matters 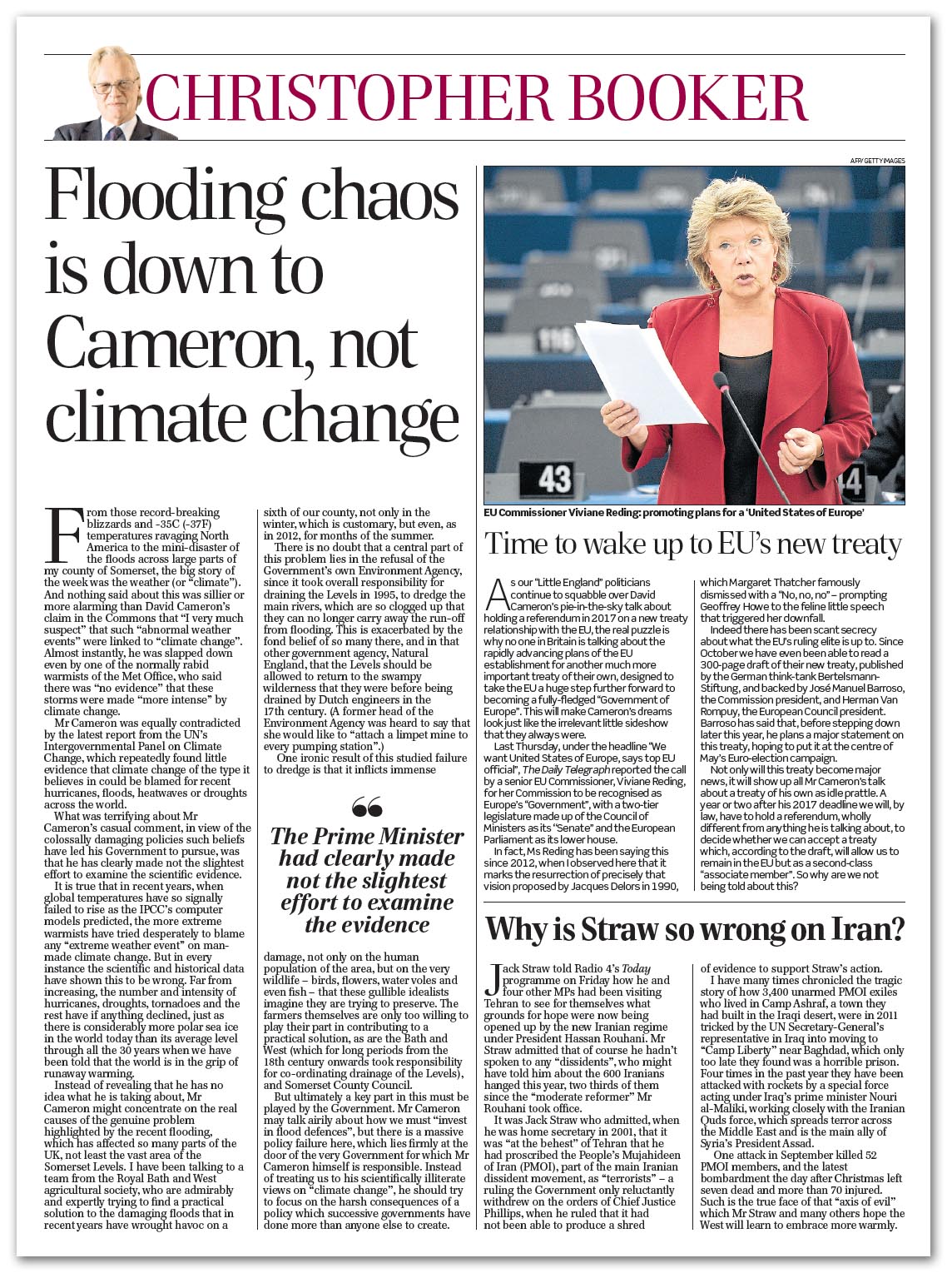 Booker has a look at the floods in Somerset and the idiocy of Mr Cameron's belief that climate change could be blamed for recent hurricanes, floods, heatwaves or droughts across the world.

He also picks up on the latest on the People's Mujahideen of Iran (PMOI), their misery at "Camp Liberty” near Baghdad and the duplicity of Jack Straw, who is singing the praises of the "moderate" President Hassan Rouhani.

And then there is Viviane Reding, a vice-president of the European Commission, and the upcoming EU treaty.

As our "Little England" politicians continue to squabble over David Cameron's pie-in-the-sky talk about holding a referendum in 2017 on a new treaty relationship with the EU, Booker writes, the real puzzle is something else.

Why is it, he asks, no one in Britain is talking about the rapidly advancing plans of the EU establishment for another much more important treaty of their own. This is the one designed to take the EU a huge step further forward to becoming a fully fledged "Government of Europe". This will make Cameron's dreams look just like the irrelevant little sideshow that they always were.

Last Thursday, under the headline "We want United States of Europe, says top EU official", The Daily Telegraph reported the call by a senior EU Commissioner, Viviane Reding, for her Commission to be recognised as Europe's "Government", with a two-tier legislature made up of the Council of Ministers as its “Senate” and the European Parliament as its lower house.

In fact, Booker tells us, Ms Reding has been saying this since 2012, when he observed that it marked the resurrection of precisely that vision proposed by Jacques Delors in 1990, which Margaret Thatcher famously dismissed with a "No, no, no" – prompting Geoffrey Howe to the feline little speech that triggered her downfall.

As we have both noted, there has been scant secrecy about what the EU's ruling elite is up to. Since October we have even been able to read a 300-page draft of their new treaty, published by the German think tank Bertelsmann-Stiftung, and backed by José Manuel Barroso, the Commission president, and Herman Van Rompuy, the European Council president.

Barroso has said that, before stepping down later this year, he plans to make a major statement on this treaty, hoping to put it at the centre of May's euro-election campaign. Not only will this treaty become major news, but it will also show up all of Mr Cameron's talk about a treaty of his own as idle prattle.

A year or two after his 2017 deadline we will, by law, have to hold a referendum, wholly different from anything he is talking about, to decide whether we can accept a treaty that, according to the draft, will allow us to remain in the EU but as a second-class "associate member".

"So why are we not being told about this?", Booker asks.