EU politics: I think we knew that 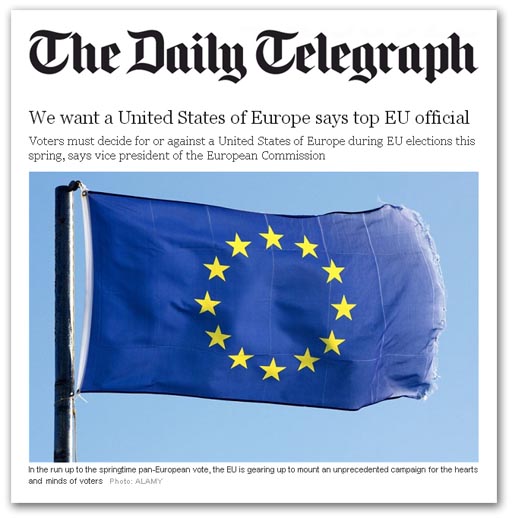 The Telegraph is offering us the "news" that European Commission Vice President Viviane Reding is calling for a United States of Europe.

The funny thing is that she did that in a speech last October, and in an article in November and she currently has that sentiment up on her website. So I guess it isn't really news after all.

Nevertheless, we are being told, months after the event, that Reding wants the Commission as a government, with two chambers – the European Parliament and a "Senate" of Member States". But being as it is a "newspaper" that is telling us this, we are being led to believe that Reding said all this "last night", as if it was the first time – with no mention of the previous occasions.

The europhile New Europe barely thinks this is news - an unsurprising response when you look at Reding's website – last updated on 7 February last year. It tells us:

As in the US, we will need a two-chamber system for the United States of Europe. A durable political Union with a strong government (the Commission) and two Chambers: the European Parliament and a 'Senate' of Member States. This European government must be accountable to the directly elected European Parliament.

If you want it in more detail, you can read all about it in the "Fundamental Law of the European Union" produced jointly by the Bertelsmann Stiftung and the Spinelli Group, and published last October, ready for next year's treaty convention.

That same draft, incidentally, sets up a form of associate membership, which allows a member state to negotiate its own deal. This, presumably, is tailor-made to entice Mr Cameron, who could then recommend the new treaty to the British people on the grounds that it would give him the opportunity to come home with a new relationship.

The Telegraph. though, has Farage babbling that Mrs Reding has "revealed" the true choice for British voters to make at polling stations at the euro-elections in May. But, in fact, the Commission has been flagging this up for well over a year, and most recently in September, when Barroso promised us a statement in the spring, before the euro-elections.

Of course, this will still come as a surprise to the legacy media, and even more so to Mr Cameron, who will go down with his ship, still trying to convince us that he's going to Brussels for a renegotiation. But for EU Referendum readers, nothing here is new.

There are no secrets in the Commission's plans, and no need for dramatic "revelations". The Commission has been up front about its ambitions, and the details are there for all who want to see them – even Nigel Farage and the Telegraph.
We have been for many, many months, in the run-up to a new treaty, and so far we are well on schedule.