EU politics: every option but renegotiation 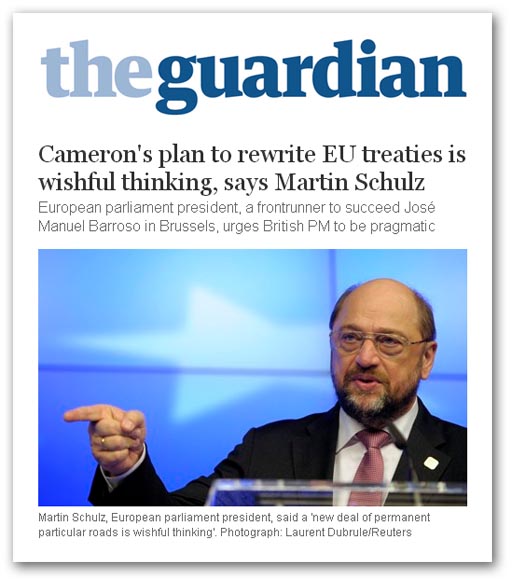 To judge from his pronouncements and emphasis on immigration, Mr Cameron must have been reading the polls. That would explain why he keeps on about renegotiating the terms – it clearly plays well with a certain constituency.

To keep reminding people that renegotiation is not an option gets a little tedious after a while, but this time it's the turn of Martin Schulz, currently European Parliament president and tipped to replace Barroso in the autumn.

Mr Cameron's campaign to rewrite the terms of Britain's membership of the EU is, he says, "wishful thinking", which is likely to be rejected by many other EU member states.

Despite the prime minister's insistence that he will be able to secure a new EU deal for Britain by repatriating powers ceded to Brussels, the view is that there is little appetite in Brussels and other EU member countries for renegotiation. It is not clear if Cameron can deliver treaty change, says The Guardian, which has been interviewing Schulz.

Schulz himself dismisses the attempt to cherry-pick the treaties to achieve bespoke membership terms tailored for individual countries. "A new deal of permanent particular roads is wishful thinking," he says. "It is unacceptable for a lot of the other countries".

Rather than repatriating powers from Brussels, Schulz said he would be open to discussing "a re-delegation of duties" within the EU, arguing that the commission in Brussels was too big and tried to do too much.

"I go with him [Cameron] as far as I share his views," said Schulz. "My message to the commission would be: what are the things we are doing here that we don't need to do here".

Nevertheless, he holds no truck with Downing Street, which has yet to make clear what it wants. "Cameron should make his suggestions for reform of the EU and then we can discuss it openly. I don't believe it is good to say 'these are my points and if you don't agree I'm going out'. It is not in the interests of the UK to go in this direction. Let's be pragmatic and not look at it ideologically".

But the really interesting thing coming out of this is the view from "senior officials", who now say that it is entirely possible that there will be a "parting of the ways". They dismiss talk of a two-speed or multi-speed Europe of individual countries heading in the same direction, if at different rates.

"It's not a slower train. The UK is off the train and not heading to the same destination. Or it's out of the EU," says a senior diplomat. "Both options are possible".

And there's the rub. Whatever it is that Mr Cameron says he wants, he can't have. Whatever plays in the polls is going nowhere in real life. Read Mr Schulz's lips: renegotiation is not an option.