EU politics: too late to make a difference 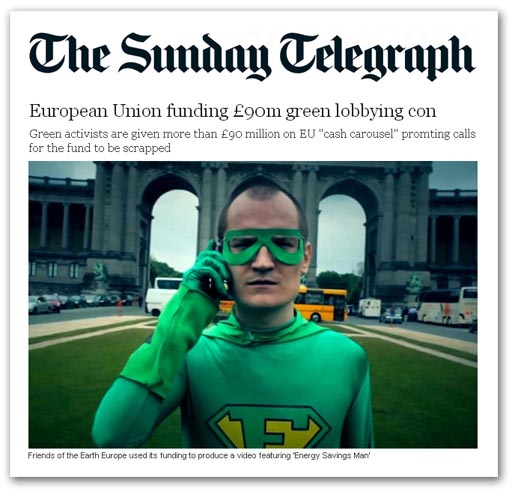 Something to which we drew attention to in July 2007 (see below), and the Daily Telegraph itself did in August 2007, with the headline, "EU Commission pays group to lobby Brussels", the Sunday Telegraph now sees fit to inform us of today, over six years later.
In 2007, the Telegraph had selected then Conservative MEP Roger Helmer as its talking head, chosen to accuse the to the European Commission of a "grotesque" waste of taxpayers' money after it had "allocated funding for an organisation that exists to lobby Brussels".

Now says the Sun Tel's dynamic duo, Robert Mendick and Edward Malnick, ""The European Union is paying green campaign groups millions of pounds effectively to lobby itself". "Activists", they say, "are being given the grants from a European Commission environmental fund, which enables a network of green groups to influence and promote EU policy". The practice has been branded a "cash carousel" by critics, who have called for the special fund - called Life+ - to be scrapped.
Needless to say, the paper hasn't actually done its own work and instead relies on the publicity-seeking TaxPayers' Alliance, which "has analysed its spending", thus "discovering" that the latest round of grants went to help "strengthen" green groups "in the dialogue process in environmental policymaking and in its implementation". 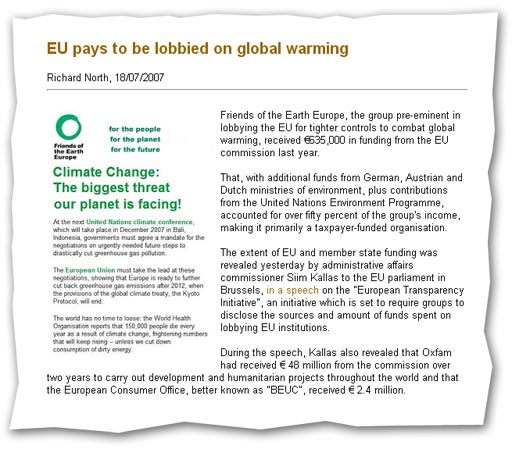 This was hardly difficult as the Commission helpfully publishes all the information on its website, publishing annual reports with everything you could possibly want to know about the subject. From this, we are pleased to learn that the work programme of Friends of the Earth Europe in 2013 cost €1,368,059.00, of which the EU contributed €751,064.00 (54.89 percent).

These clever "discoveries", though, give departing TPA chief executive Matthew Sinclair a platform to burble that, "It is a disgrace that Brussels is squandering taxpayers' money promoting its green agenda by funding activist organisations. This is a cash carousel. The campaigns these sock puppets run promote more wasteful spending, higher taxes and more levies added to people's bills".

However, while pompously informing us that, "The British Government need to make it clear they oppose these grants and press the European Commission to abolish the scheme", the egregious Mr Sinclair seems to have missed a trick.

As we exclusively reported last week (above), after discovering the information on the European Parliament website, the new LIFE programme for 2014-2020 has just been signed off.

This approves annual grant payments of around €11 million (see page 58) to environmental NGOs, totalling €83.5 million for the sever-year period. This will to enable them, amongst other things, to continue their opposition to fracking. The EU funds will also be used to leverage further contributions from charitable foundations and member state governments, making these NGOs formidable players, acting at the heart of the system.

If Mr Sinclair had really wanted to influence the decision to continue the funding, he really needed to talk to the European Parliament. It approved the programme on 21 November. But then, since it was approved by 568 votes to 20, with 21 abstentions, he would have had his work cut out. As it is, he's left it far too late. It will be another seven years before there is another opportunity.

However, influencing decisions has never really been TPA's game. And as long as the dynamic duo in the Sun Tel is around to act as its publicity organ, we can continue to enjoy six-year-old news, with whatever talking head is convenient at the time.