EU Referendum: wasting our time on a non-event 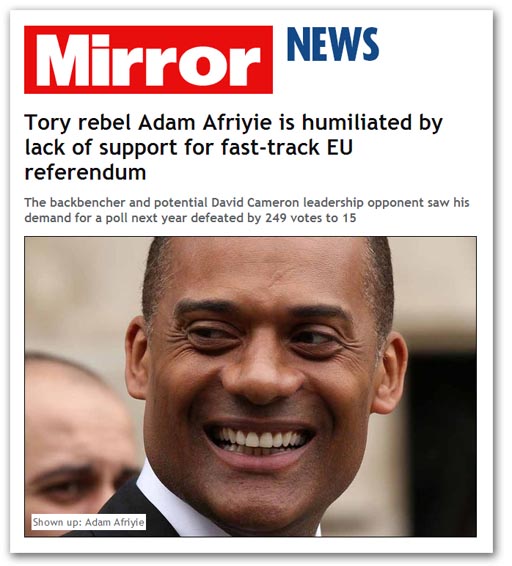 Does anyone remember the "shock-horror" front-page banner headlines in the Mail on Sunday on 6 October? Then, in full-frontal style, we were told of "PM panic as Tories bid to quit EU next year", heralding Adam Afriyie's bid to force a referendum on Britain's membership of the European Union in 2014.

Some of us writing at the time knew it would come to nothing, and said so – not that it stopped the tactically inept Nigel Farage supporting Afriyie. But, as it could only do, this fatuous piece of grandstanding has run into the ground, its sponsor humiliated by a vote of fifteen for, to 249 voting against.

This has not stopped the idiot MP prattling on Conservative Home that a 2014 EU referendum was "the only way to guarantee that British voters had their say on Europe".

It isn't, of course, never was and was never going to come to pass. The whole exercise has been a complete and utter waste of time and effort, distracting people (and a willing legacy media) from the substantive issues.

A hint of these actually emerged in the Commons debate yesterday when Labour/Co-op MP Gareth Thomas took the floor to assert, in respect of the proposed referendum, that he had "evidence that the Foreign Secretary, possibly, and certainly the Minister for Europe, are not 100 percent committed to the 2017 date, and have already considered scenarios in which that supposed commitment could be scrapped".

He then referred to discussions in committee on 3 September when Cheltenham MP Martin Horwood "set out the perfectly plausible possibility that negotiations on treaty change might be ongoing as the Bill's arbitrary deadline approached".

And, said Thomas, in Committee the Minister had "half accepted that such negotiations, involving many countries and considerable complexity, could still be taking place". Ministers, he added, "could be in the middle of crucial negotiations, but rather than concentrating on completing them just when they are in their most sensitive stage, they would have to switch all their attention from fighting Britain's corner to fighting a referendum campaign".

Of course, under such circumstances, there simply could not be a referendum and, since there is every likelihood that there will be treaty negotiations in place during 2017, the chances of a referendum in that year are next to nil.

The interesting thing here is that, while the media is prepared to waste its (and our) time on endless speculation about what is going to be a non-event, we are seeing absolutely no coverage of the looming probability of a new treaty, with a convention being launched in the Spring of 2015, just in time to demolish Mr Cameron's "Europe" strategy.

Those of a conspiratorial nature might wonder whether this enthusiasm for an early referendum is because a "no" campaign would most certainly lose. But it is harder to work out why there is such a blanket of silence from the media over the prospects of a new treaty, and the likely timetable.

Part of the reasoning is most certainly to do with the profound ignorance of journalists on EU matters – a trade that has a hard time telling the difference between a "summit" and a European Council. But there is also an element of "gatekeeping" here, where the legacy media, in all its usual arrogance, wants to dictate the political agenda.

Currently, the idea of a forthcoming EU treaty does not fit the political narrative, so the hacks will simply not write about it. When it becomes convenient to notice what we've known all along, we will get the usual crop of hacks preening themselves at their cleverness in "revealing" the obvious. Then we can, at last, get down to some serious politics.
At the moment though, reading most of the legacy media commentary on the EU is simply a waste of time.