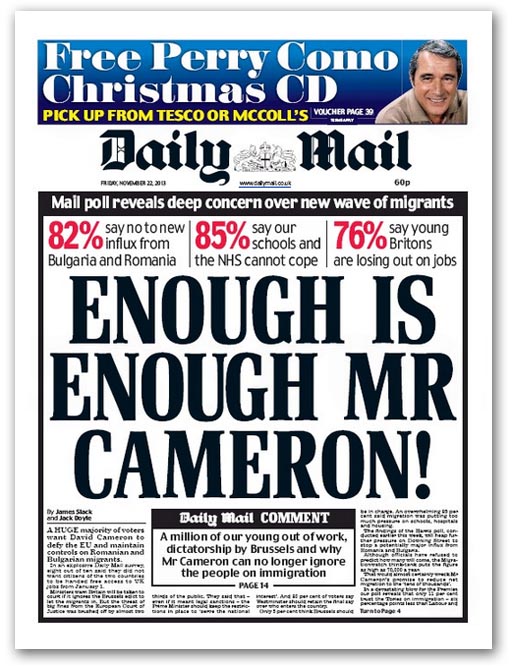 An extraordinary front page from the Daily Mail has the paper stealing the clothes from the Express as it highlights public concern over the tide of immigration that we are supposedly about to receive.

"Enough is enough Mr Cameron", the front page blares, as details of a Harris opinion poll record that 82 percent of respondents said "no" to a new influx from Bulgaria and Romania, 85 percent think migration was putting huge pressure on schools and hospitals and only five percent think "Brussels" should be in charge of policies.

To stoke up concern, we are told that the think tank Migrationwatch believes 70,000 migrants will arrive in January, although the text of the article is actually couched in terms of the figure put "as high as 70,000 a year".

Playing the jobs card, the paper then offers an editorial headed: "A million of our young out of work, dictatorship by Brussels and why Mr Cameron can no longer ignore the people on immigration".

In less than six weeks, unless there is a decisive Government U-turn, the editorial says, "Britain, as required by the European Union, will throw open its jobs market to the 29 million citizens of Romania and Bulgaria. It's a development which could have the most considerable implications for the Prime Minister, British society and, most importantly, this country's one million unemployed young people".

Yet, we are told, "David Cameron and his ministers are approaching 1 January with a head-in-the-sand insouciance which is so sadly typical of a political class that is increasingly remote from the lives and concerns of ordinary voters".

That latter reference is to a recent statement from immigration minister Mark Harper who, on the one hand, said it would not be "legally possible" to extend the ban on incomers from Romania and Bulgaria  as he is being asked to do  and then denied that there will be a flood of migrants in the New Year.

What is fascinating from an electoral point of view is that the opinion poll asks respondents which party they trust most of immigration. Here, UKIP scores relatively well, with a rating of 22 percent, close to double its normal poll support. This compares with 17 percent for Labour and 11 percent for the Conservatives, with four percent for the Lib-Dems.

There is surely a tribal element in the response here, but the greater confidence in UKIP would seem to endorse the party's recent obsession on the issue. However, as the Mail remarks, a massive 44 percent do not trust any party on immigration, clearly failing to see UKIP as part of the solution.

One could aver on the basis of this poll that the way is open for UKIP to come up with a coherent and workable policy, spreading the word with Sykes' money and thence pulling in more support and converting it into actual votes.

You would have thought that this would translate into hostility to the EU in general, and increased support for withdrawal, combined with higher poll ratings for UKIP. But, as we have recently seen, this is not the case. Those wishing to leave the EU are declining in numbers while poll support for UKIP is flat-lining.

Clearly, there is much more going on than the polls themselves would indicate, and  as always  whatever the polls tell us must be taken with a pinch of salt. Furthermore, these single issue polls are notoriously unreliable, with the context and the phrasing of the questions having a significant effect on the responses.

Here, it would be interesting to see the results of a poll that put to respondents that, "free movement in the EU has been beneficial to the UK economy, it enables us to live in sun-soaked EU countries if we wish, and the Government says it is vital for our success in exploiting valuable export markets", with the question then: "do you think free movement within the EU should be restricted?".

The point, of course, is that it is relatively easy to get the answer you want in a commissioned opinion poll. What is less easy is to see how the results relate back to other findings, where there are apparent contradictions or inconsistencies  or maybe not.

Perhaps, despite the hype, the majority of people do not see immigration as quite the make-or-break issue that some newspapers (and political parties) would have it to be. Indisputably, it scores high on issues of concern, only second after the economy, but when the question is rephrased, the score plummets.

Asked about important issues facing the country and immigration gets a 54 percent concern ranking, yet when respondents are asked about issues facing "you and your family", the concern drops to 16 percent. Essentially, if people are voting for their country, immigration is important. If they are voting for themselves and their families, it is less so.

Further, a report in June had it that "people are far more positive about some types of immigration that you would think". And that might better represent the settled opinion, as opposed to the concern inflated by recent, lurid headlines.

Clues on this had already been in place in January. Then, a poll suggested that when people thought about their local areas, there was less concern. While 30 percent placed immigration first when thinking about tensions facing British society as a whole, only 19 percent chose it as the most divisive issue in their own area.

There was also very little correlation between the geographical distribution of immigrants and the levels of concern. Immigration was regarded as the most divisive issue for 19 percent of people in north-east England and 20 percent in Wales  where the 2011 census showed five percent of people were born abroad  and for 20 percent of Londoners, where immigrants make up thirty percent of the population.

The issue here is that the public response to immigration is far more nuanced that the headlines allow for, opening the way for a more sophisticated policy response. Certainly, concern about Bulgarians and Romanians is not translating into more general opposition to immigration  and is unlikely to do so. That means that stoking up this issue is not necessarily a vote winner.

The great mistake, therefore, would be to assume that, because the Mail is doing a number on this issue, "banging on" in like manner is necessarily going to yield electoral dividends. In fact, unfocused stridency risks bumping up against settled views, antagonising voters rather than attracting support. And this may be why UKIP is not getting the support it thinks it deserves.