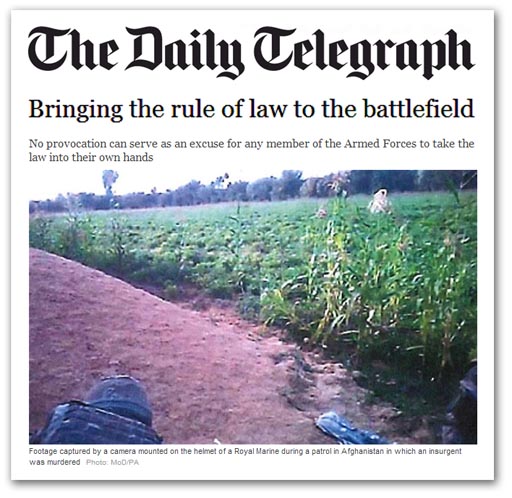 I don't want to dwell on the fate of Marine A, who faces a sentence in the courts for the murder of a Taliban insurgent, other than to say that, if any soldier takes such an action - which has been a feature of every major war in which British soldiers have served - then a little more care should be taken to ensure that there is no evidence left behind.

However, what is rather striking is the certainty with which establishment newspapers such as the Telegraph are wont to assert that the rule of law should apply.

"It is the fundamental duty of the military", says the Telegraph leader, "not only to maintain the highest standards of discipline, but to observe and respect the laws of war ". It goes on to say that: "Without them, civilised nations quickly lose the moral high ground, and risk being reduced to the same level as the brutal enemy they seek to defeat".

Despite calls for leniency, the paper thus says that when Marine A is sentenced this week, the court must "balance the circumstances in which the crime was committed against the principle that all those who serve in Her Majesty's Armed Forces have a duty to uphold the rule of law".

By this measure, we must see a low-ranked soldier committed to prison. But, when it comes to high-ranking soldiers and the rule of law, such as the duty of care when it comes to sending out troops in substandard vehicles, we see the same newspaper fielding Charles Moore to tell us that, "If there is a risk of litigation and even prosecution, how can commanders make proper decisions on the ever-changing battlefield?"

Methinks we're seeing a little hypocrisy here. Certainly, "commanders" can't have it both ways.
If Her Majesty's Armed Forces are held to have a duty to uphold the rule of law, then they cannot pick and choose which laws are upheld. The law should be the law, and where senior officers needlessly expose the troops in their charge to unnecessary danger, then they too should be held to account for their actions in a court of law.